By the time you’re reading this, we can only hope that I’ve already gone into labor. This means I either posted my second-trimester update way too early, or I waited way too long to share my third-trimester update.

Either way, it’s best for the sake of physicians scales everywhere and the mental sanity of my husband Jared that I give birth soon.

And in case you’re wondering why it looks like Jared should also be giving birth soon, that’s because I made him wear a weighted, 30-pound sympathy belly with breasts for an entire 24 hour period (including sleeping at night, let’s be real that’s the worst part).

Now rather than a long monologue of my third-trimester feelings (there are QUITE a lot of those, most of which don’t make sense), I decided to do more of a listicle this go around.

Dads, brothers, and slightly skittish men alike can go ahead and stop reading now because this is likely to get awkward for you. Based on the blog color scheme and my Dad’s general lack of understanding of what I do, it’s not likely many of you will fall under said categories, but clarifying just in case.

Let’s get down to the real chit chat… 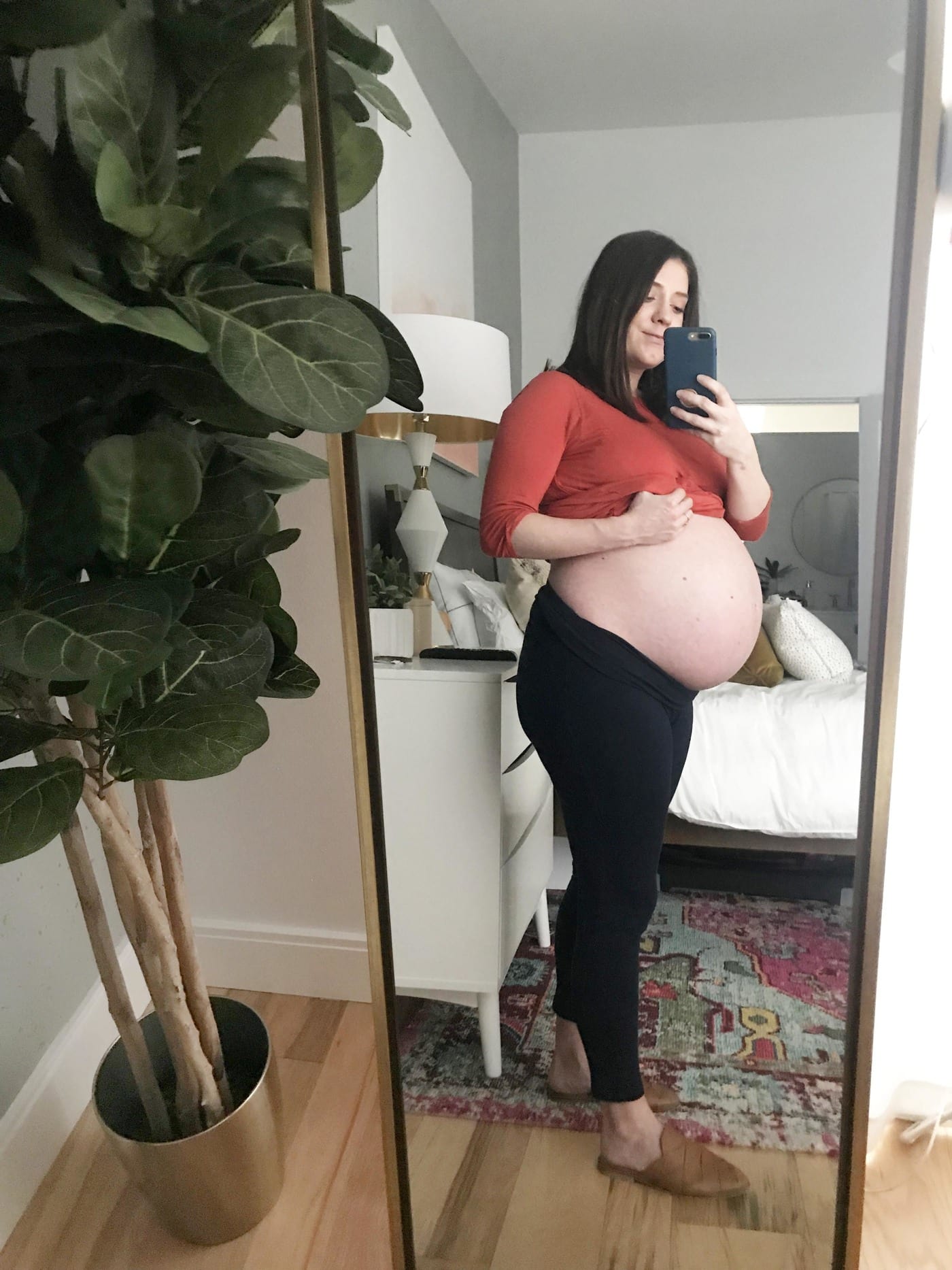 1 — Most days I’m tight like a boa constrictor after eating. Actual footage of me in the grass seen here. Apparently my body realllly loves Braxton Hicks no matter how much rest I get or water I drink.

Basically, it’s setting me up for being in denial that I’ll ever go into real labor. I started having them at 27 weeks and they haven’t stopped since!

2 — Lightning crotch is my newest unsexy phrase that I use regularly. There’s nothing quite like standing in the check out line in the mall trying to act like you’re not getting stabbing ice pick feelings up your vagina while reaching for your credit card to give the cashier.

3 — I’ve had to restrain myself from hateful replies back to people who are either seriously (or jokingly) asking if I’m having more than one baby. Look bro: I don’t talk about what I think you look like, so shut your mouth.

4 — I made the grave mistake of booking maternity photos WAY too late in the game (aka past 8 months pregnant) and thus have a double chin in every single photo basically.

In hindsight, maybe it’s best that we remember this time for what it really was then to have overly idealized photos that I look back on and think overly highly of how I carried myself, lol.

5 — Somewhere along the line…sometime before I lost all sight of my ankles and after becoming a boa constrictor…I got actual bologna nipples.

Like, real life-sized bologna slices right on my boobies. Had NO idea it was physically possible to have my nipples grow that big and change color overnight. They’re basically Transformers.

6 — My husband asked me the other day if “everything was alright in the bathroom” to which I replied, “you try and wipe and pull your panties back up like this!”.

7 — At 38 weeks and 5 days, I’ve officially gained 40 pounds. We’re not sure when exactly I lost my ankles, but I had to stop wearing my wedding ring a few days ago, so feel free to do the weird biological math on that.

8 — I’m happy to report that I shouldn’t have tried to do any woman-scaping down there on my own before labor. I looked closely in the mirror afterward and it’s about as bad of a botch job as a three-year-old with long bangs and a pair of scissors with little to no hope of it growing back in in time to not be any less humiliating than it already is.

I was too afraid to get a wax job, clearly, so now I’m dealing with this look below the waist.

9 — At 39 weeks, I’ve all but given up on regular clothes. I only wear leggings and everything stretchy over-the-bump-thing that Old Navy sells.

10 — I now have glutes of steel because I literally have to do full on squats every single time I want to pick something up off of the floor. This is only made much worse by my incessant need to clean everything “in case she comes today”.

11 — Basically I stopped making sure-fire plans because I’ve convinced myself “this is really going to be it” every five seconds which means I’ve done almost zero fun things in the last two weeks.

12 — I’m more excited to meet this little girl than I’ve ever been to meet anyone in my entire life, while also equal parts completely terrified of coming home and what life will be like.

I’m not really one to be afraid of change, but this one is different for me. I’ve never been around a lot of babies in my life and kids don’t naturally flock to me like a magnet like they do Jared.

I mean, no pressure on taking home a small human and raising them to be a loving person with compassion and strength all at the same time, right?!

12 — Last, but surely not least, of this trimester update is antepartum depression. If you follow along on IG stories often, then you’re probably somewhat familiar with some of my recent trials.

It’s been a hard year in general without adding pregnancy hormones to the mix, but around 36 weeks I decided after talking with my husband and OB on several occasions that it was best for both baby and I that I start taking medication (a low dose of Zoloft to be specific) for combatting depression.

I’ve dealt with depression before in high school and college and took medicine for a short period both times. Luckily it’s something that I’m aware runs in my family and personal history so I’m pretty familiar with the signs of it and have found ways to cope on all other occasions drug-free.

Number one being that I’m a BIG believer in therapy. Everyone should have a someone unrelated to their circumstances to talk to regularly if you ask me, but even with that option, I still felt this was different.

Since finding out I was pregnant we’ve renovated our studio, gone through the motions of Hurricane Harvey and studio flooding, renovated our house after multiple unexpected issues and contractor rip-offs, found out my Mom had a large brain aneurysm while they were running scans to check for internal bleeding after being in a car accident from someone running a red light, followed by having several of our employees unexpectedly leave Sugar & Cloth for one reason or another.

Followed by the chaos of trying to work ahead to have any sort of maternity leave while having both Jared and I depending on the same source of income. Then add all of the regular pregnancy hormones, aches and pains, nesting, excitement, and fears… and it just got to be SO MUCH.

Suddenly it was to the point where I was becoming so perpetually sad, hateful, and negative towards myself and then to others that I started having thoughts of people being better off without me, and that’s something that can’t go unaddressed.

More importantly, it’s not fair for my soon-to-be baby or husband to have to compete with emotionally.

I would literally just have bouts of crying and then sitting in a complete daze not wanting to get out of bed or do anything, which is not me at all. I’m a doer by nature, and I’d become a total recluse sectioning myself off from everyone and trying to hide my feelings.

I’m going on week four of medication and plan to continue it through the initial stages of postpartum while keeping a close eye on signs and symptoms. I’m still doing all of my regular self-care habits like saying “no” when things are too much, church messages, taking personal spa days, therapy, trying to keep a regular schedule, essential oils, you name it.

And instead of internalizing the need for medicine as a source of weakness, I’m taking it as a positive reinforcement of making sure I’m setting both me, baby, and our family up for success instead of failure from pride and negativity.

Did any of you deal with antepartum or postpartum depression? I’d love to hear your stories and what you found worked best for you!