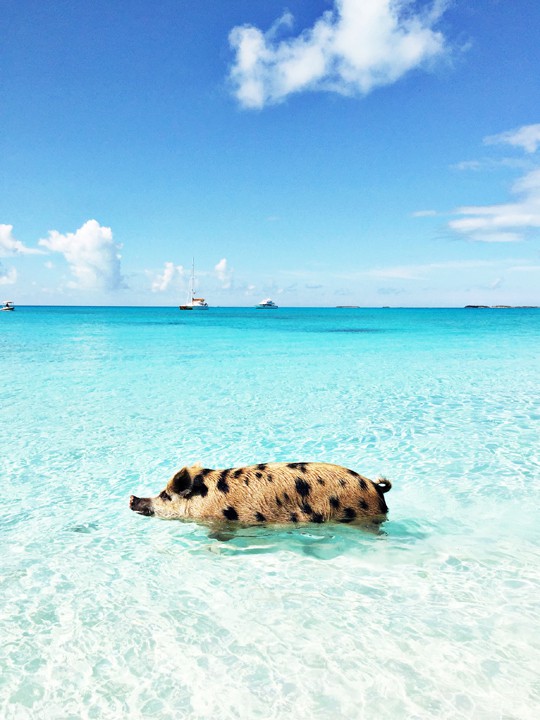 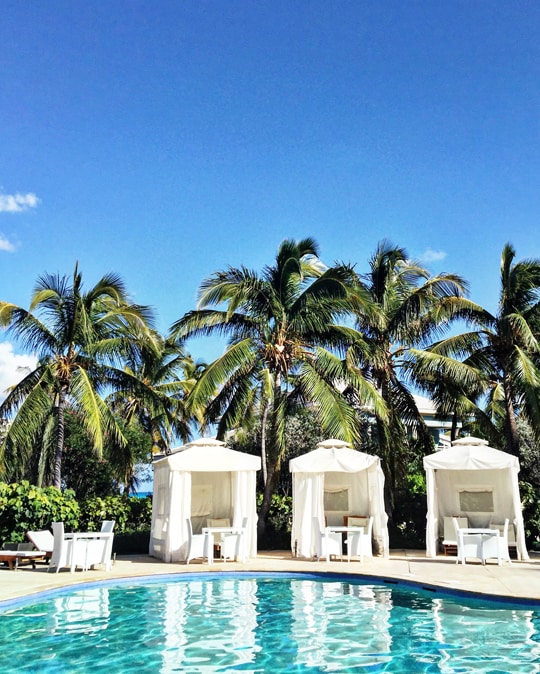 You know you’re way past due on a trip recap when you’re already trying to plan another one! Actually that’s not really true. It usually only takes me about one night sleeping in my own bed again to get energized enough for another adventure. Am I the only one that does this?! Either way, I’m super excited to share all of the (million) photos from our trip to The Exumas and Sandals Emerald Bay. Be warned, there are lots of pig photos!

First things first, don’t ever let anyone tell you you can’t dream a little dream via a Pinterest travel board, because that’s how I found out about Exuma. I have NO idea who is to blame for keeping this hidden gem a secret, but it’s by far one of the most beautiful places I’ve ever been and it’s only a 45 minute flight from Miami… 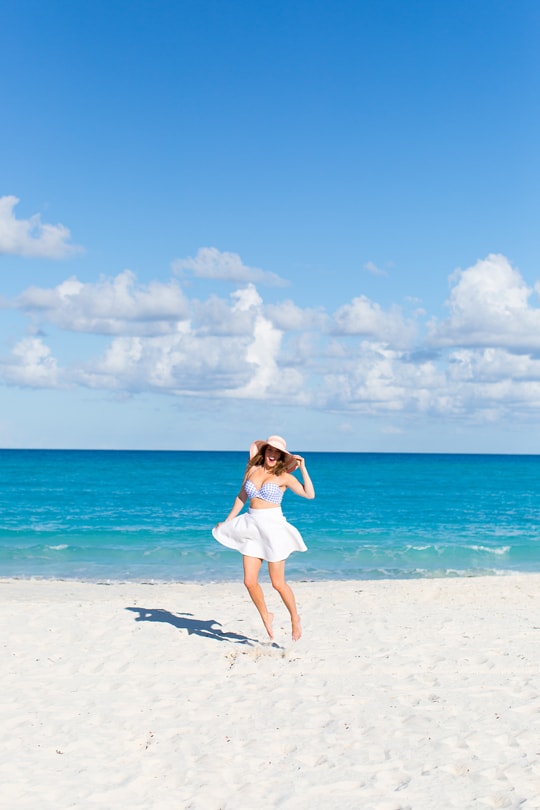 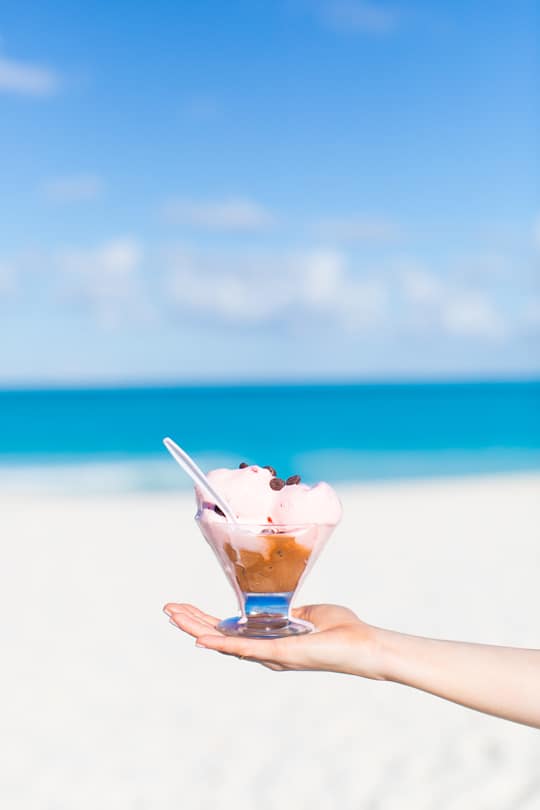 Not only are The Exumas gorgeous, but the people there are super friendly, which is not always the case when you’re traveling out of the country.

After deciding on Great Exuma, we knew we wanted to stay at a resort instead of a rental. I’m one of those people that has a hard time relaxing when I know I have to cook or try to navigate somewhere unknown for every little thing. I love that when it comes to exploring new cities, but when it comes to REALLY relaxing, I need something that’s already all said and done.

That said, we stayed at Sandals Emerald Bay and absolutely loved it! We’ve been to some all-inclusive things that weren’t great quality, but Sandals definitely exceeded our expectations (hence their “luxury included” tagline was true!). Plus Jared was ridiculously excited about golfing the Greg Norman course. 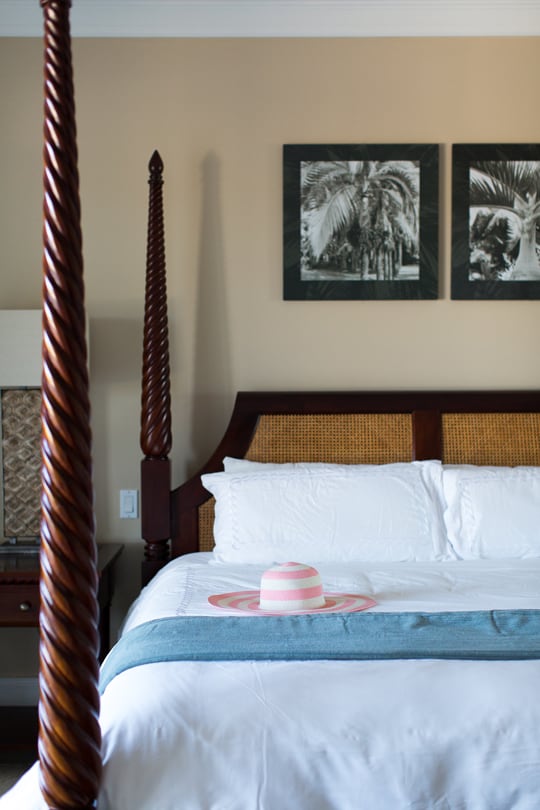 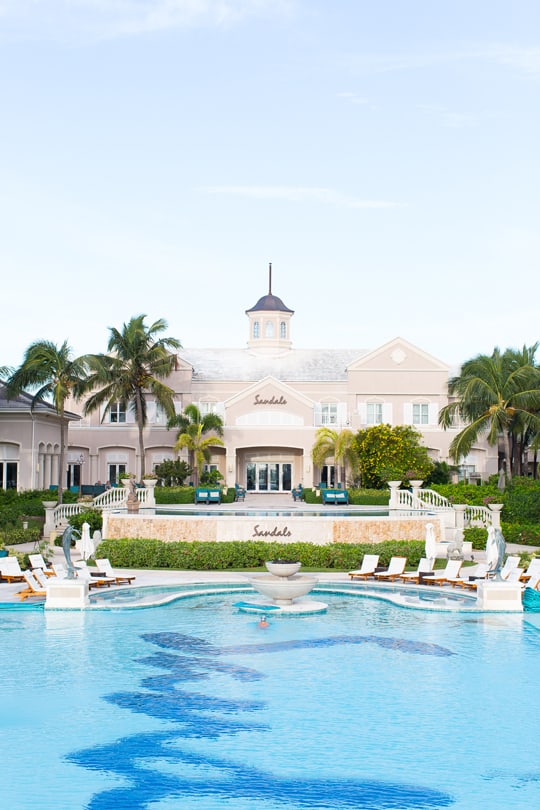 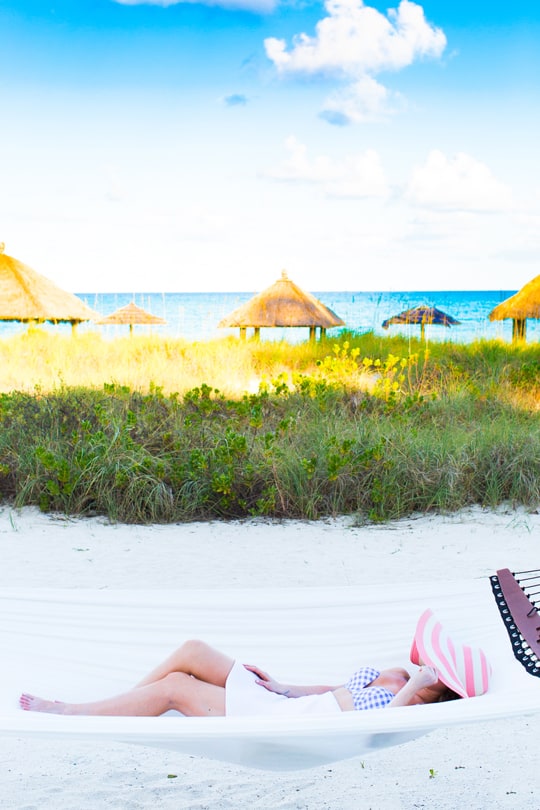 I skipped the golfing and went for the doing absolutely nothing route, and then we got a couples rain forest massage after that, which is an A++ day in my book.

We also got an oceanfront villa that, if you can swing the price point, is worth every penny. It also comes fully equipped with a hammock, stocked (name brand!) bar, and second bathroom in case that’s a deciding factor for you. 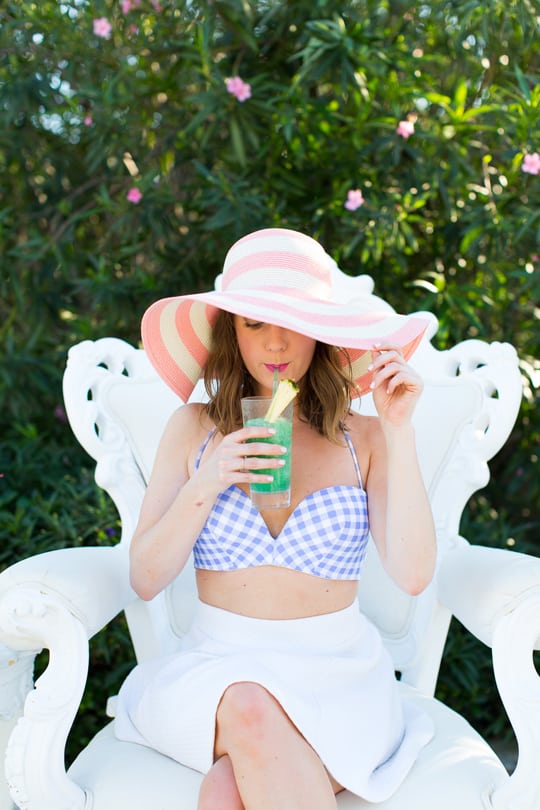 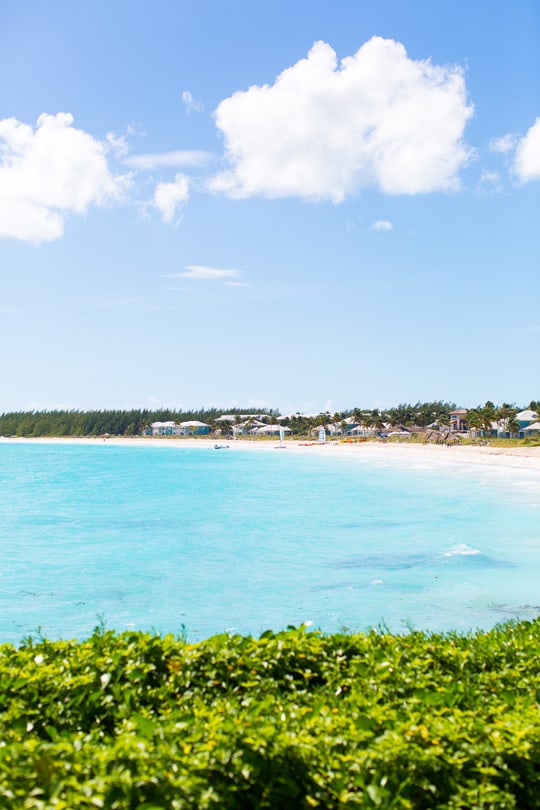 If you’re one of those people that like wild nightlife, then Exuma probably isn’t for you. They have plenty of activities, restaurants, and water sports at the resort, but it’s definitely a very laid back environment which was perfect for us. They even have a pool that’s the “serenity area”, aka no Beiber songs playing in the background there, but you’re welcome to bust them out on your headphones if you want.

If you do need some adrenaline, feel free to find one of the giant floating tricycles and try and pedal that bad boy around for half an hour. Not the easiest thing I’ve ever done, but it was the closest I’ve ever come to feeling like the missing Mario Kart character.

We also made a few new friends (hey, Mark and Kelly!) after lounging around the pool a few days, and we even ended up going on the same excursion… and then forced them to take style Titanic photos on the beach at some point. Clearly you can’t be friends with us and escape photos, ha!

The only major drawback of the island for me was the bugs. They LOVED me, and even with bug spray on they are me alive. But would I go back? Definitely! 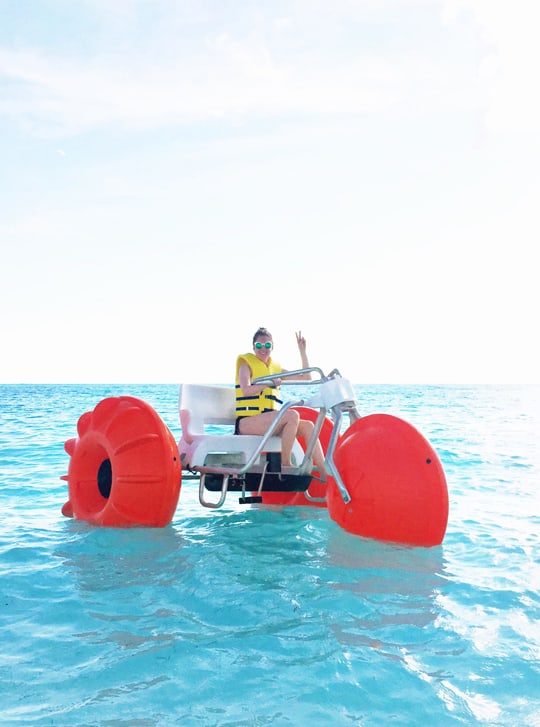 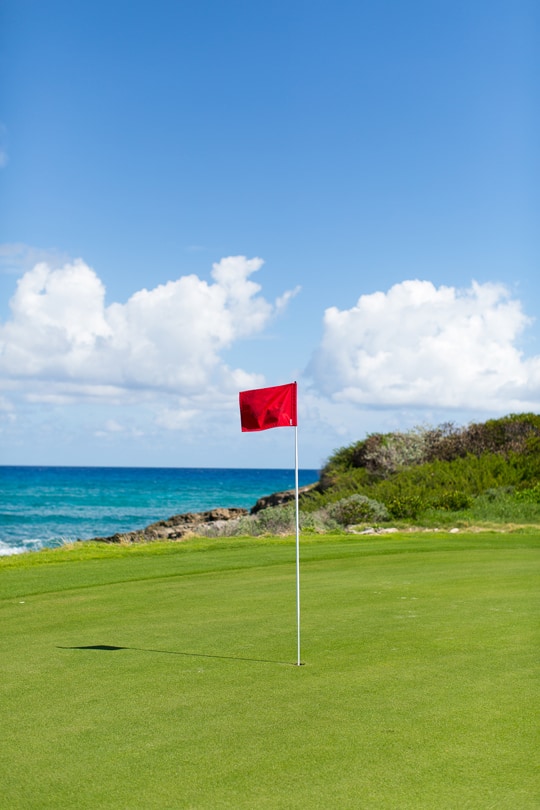 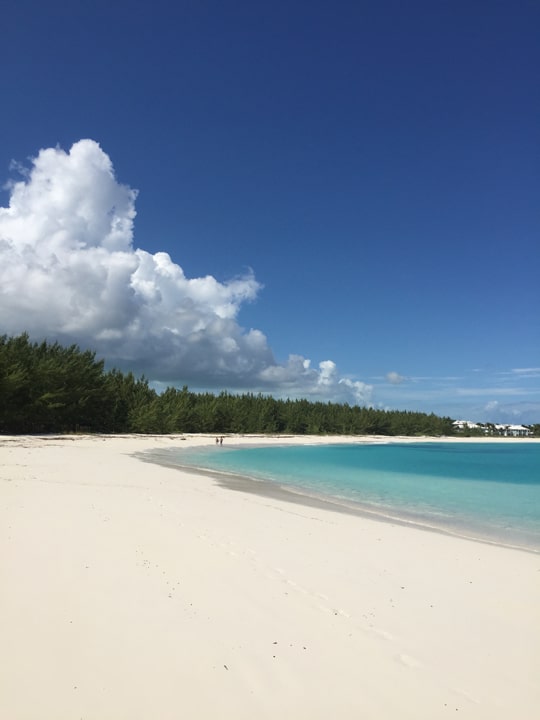 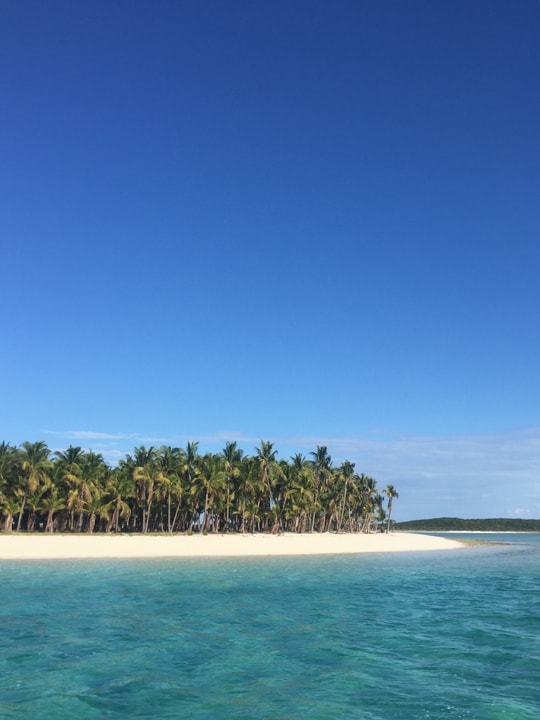 We only stayed four nights, but in hindsight, I think you need to stay a minimum of five. I feel like we still didn’t get to see and do everything we wanted to in that timeframe, and we only went on one (very necessary) excursion to see the swimming pigs.

Not going to lie, I thought I was going to fall off the boat with excitement when we approached these not-so-little babes (no pun intended) in the water! Fair warning though, no one mentions that eventually they’re going to poo in the water after 15 people are feeding them for 20 minutes straight. Minor details, my friends! 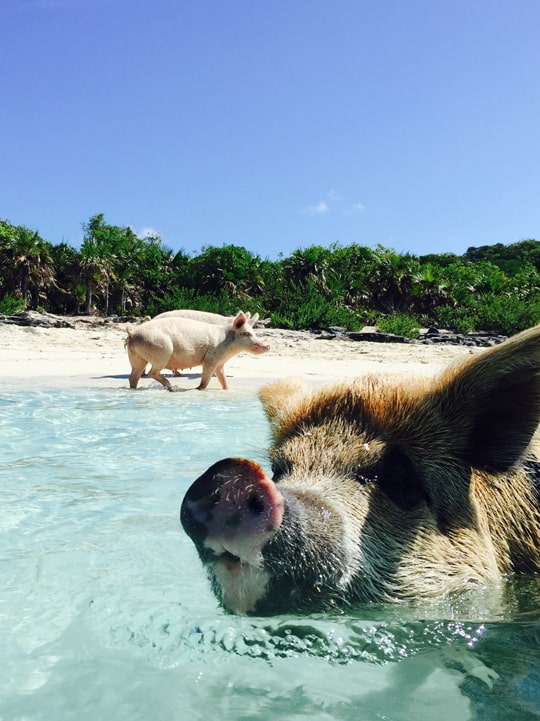 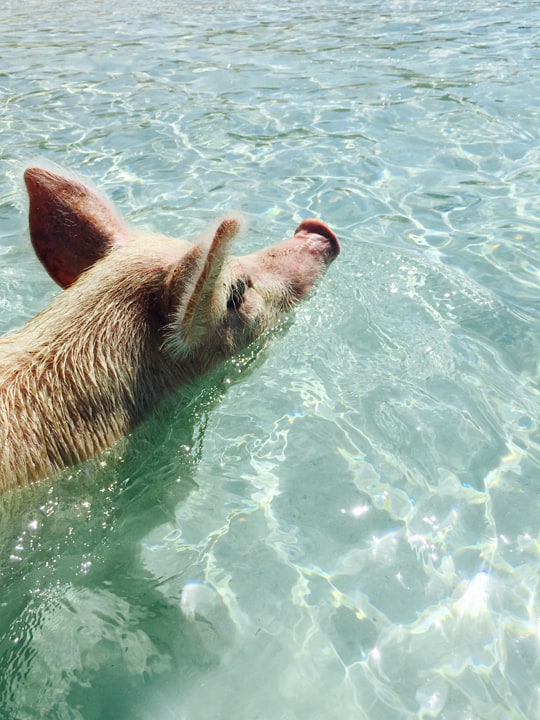 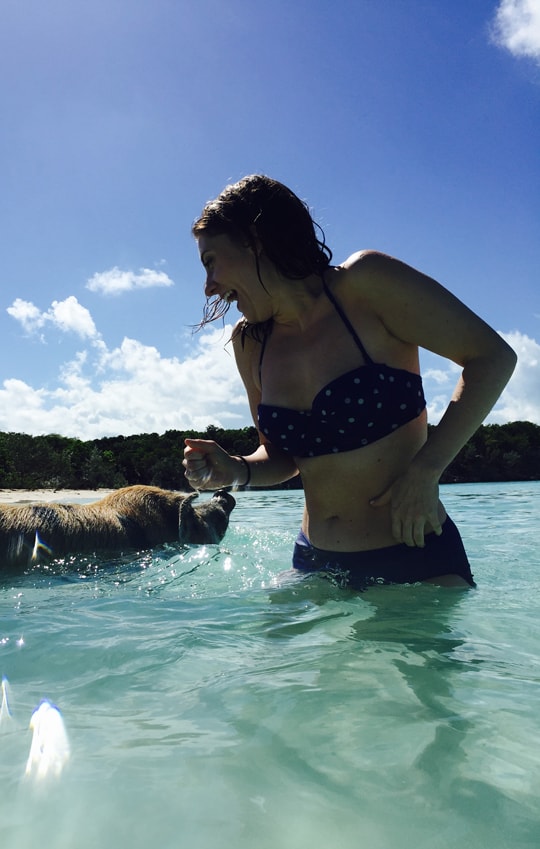 It also turns out I was a tiny bit afraid of them once I got in the water. They’re huge and they don’t have much sense of braking when it comes to dangling food in front of them, but I did much better once I got to shallower water.

The particular excursion we took wasn’t through Island Routes (which is the partner company for Sandals), and I kind of wish we had done both! It turns out there are two different islands with pigs on them in the Exumas, and depending on when you visit each one, there may or may not be baby pigs. The Island Routes tour is also much shorter and cuts out a lot of the getting to and from that takes a while. 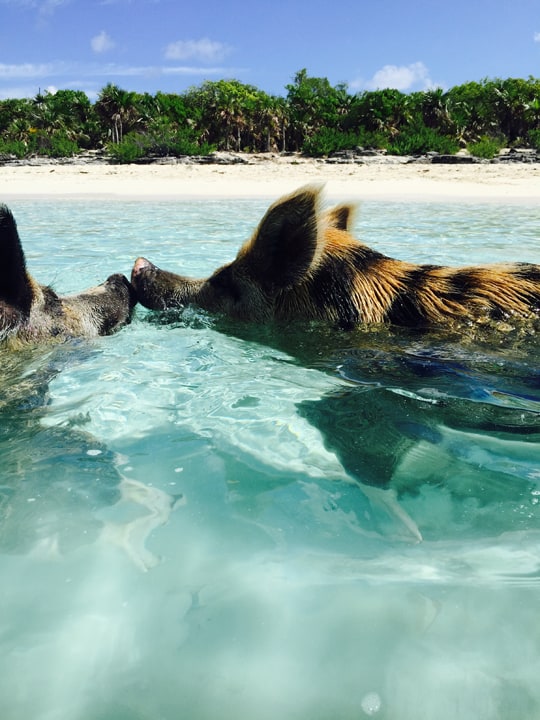 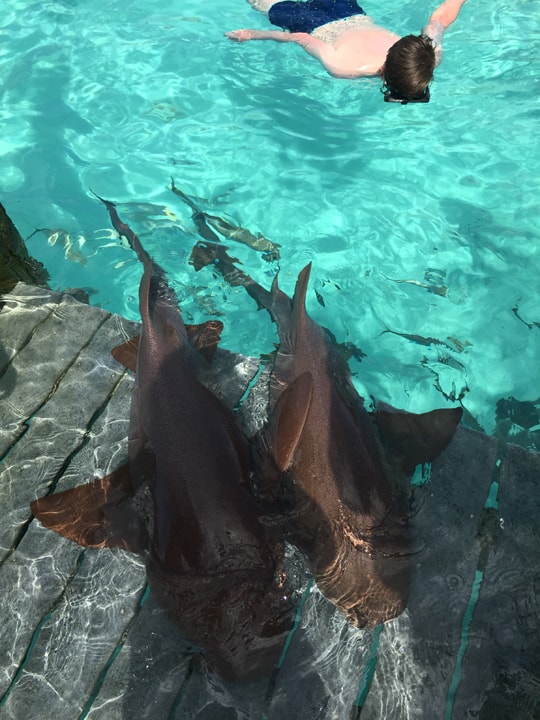 The one we took was through Four C’s and was a full day trip. I think it was 172 miles round trip if I’m remembering correctly, but you basically take a high speed boat around a good portion of the cays in between Exuma and Nassau, which ended up being really awesome.

We stopped to dive/hold live starfish, got a tour of the celebrity owned islands from the boat, visited the swimming pigs, had lunch, stopped at the most ridiculously awesome sand bar in the middle of the sea, fed the iguanas on Iguana Cay, swam with nurse sharks, and snorkeled in the underwater cave from the movie 007, Thunderball Grotto. 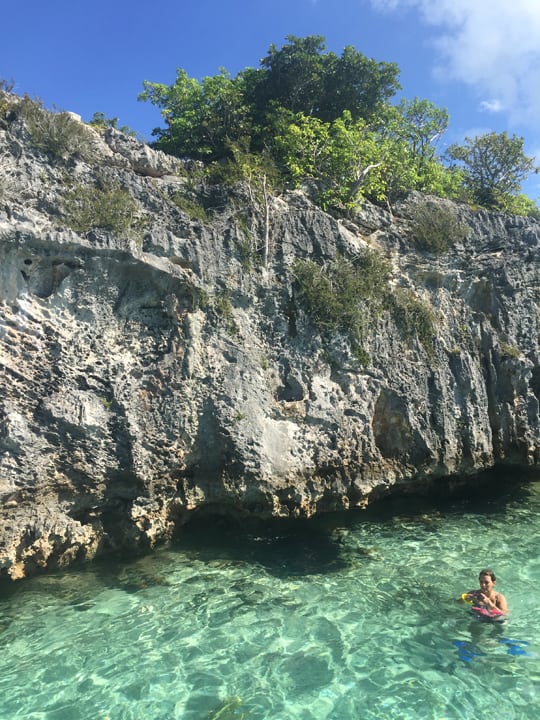 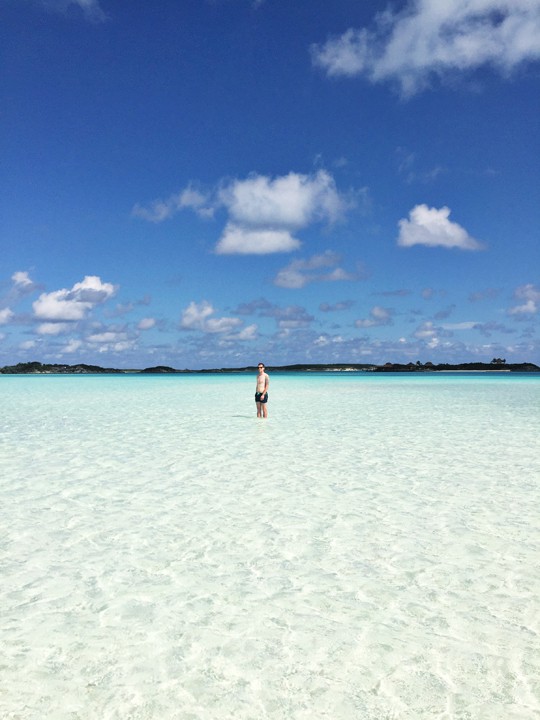 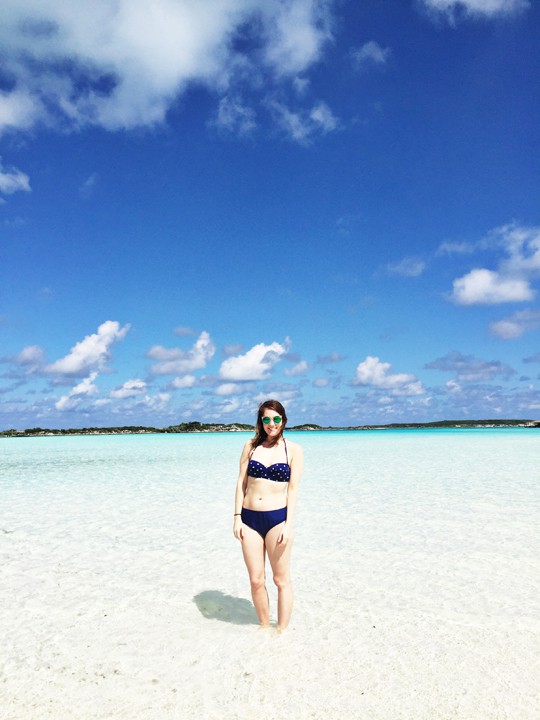 Aside from the swimming pigs, the sand bar basically made dreams come true. I could honestly walk about as far as you could see in any direction and the water still wouldn’t have been waist deep. It was crazy awesome! 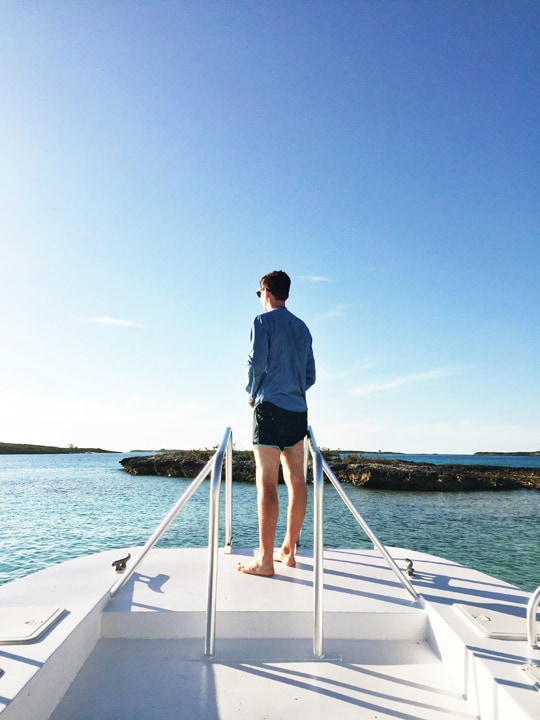 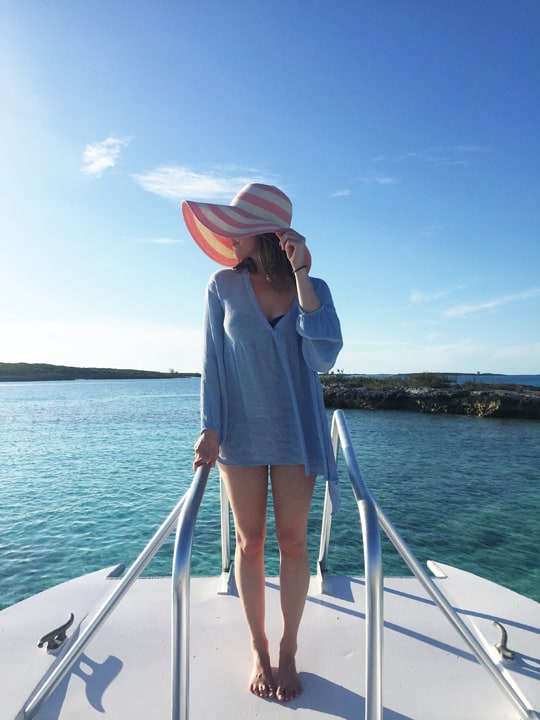 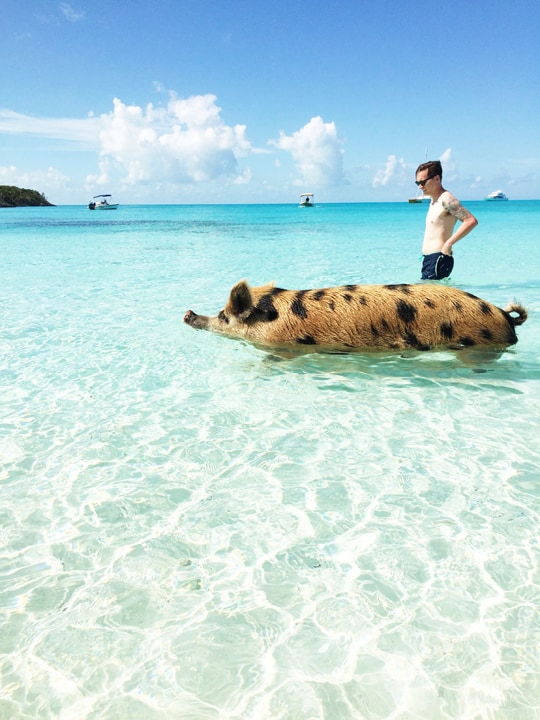 In case you were wondering just how majestic the view is from pig island, it looks like this! I think they have a better view than most people, ha! 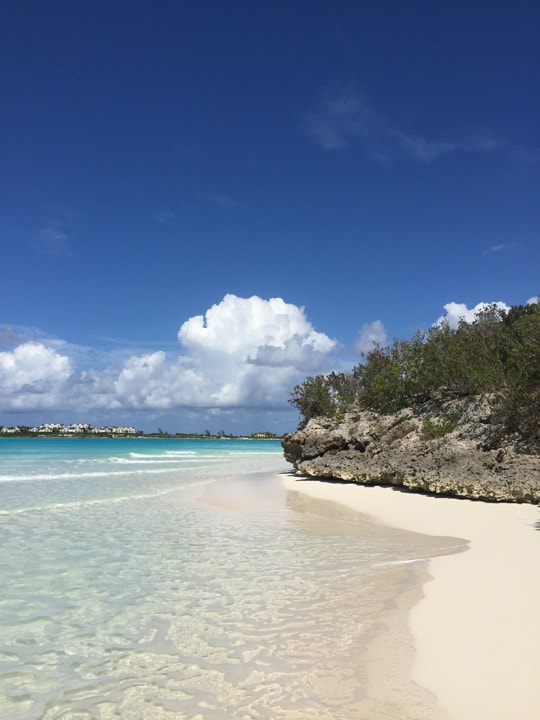 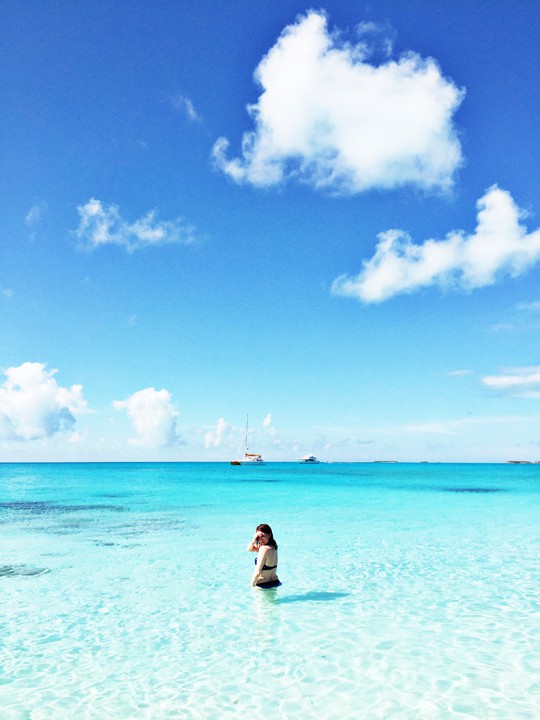 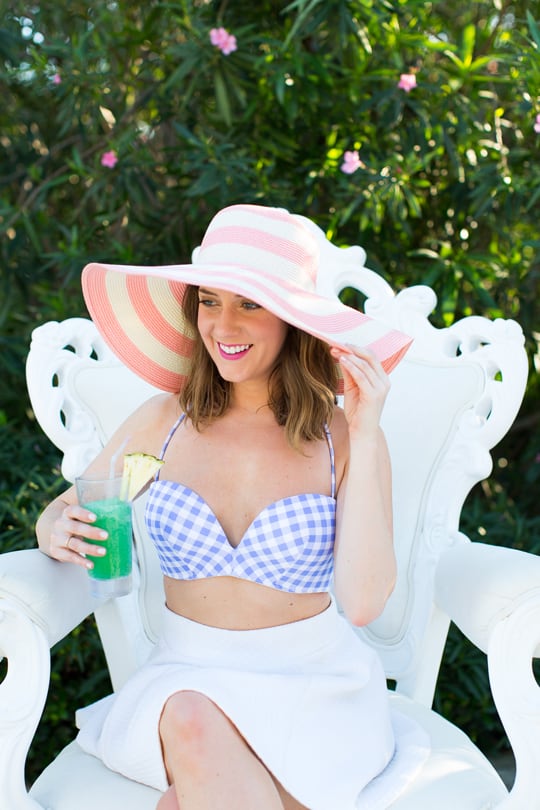 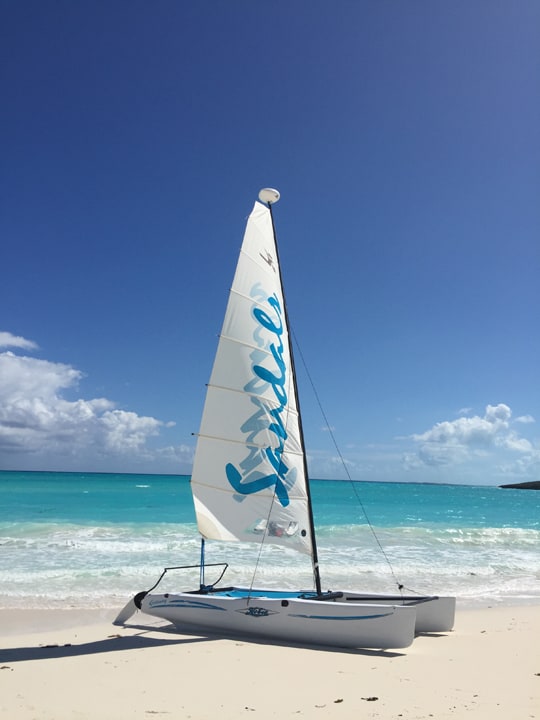 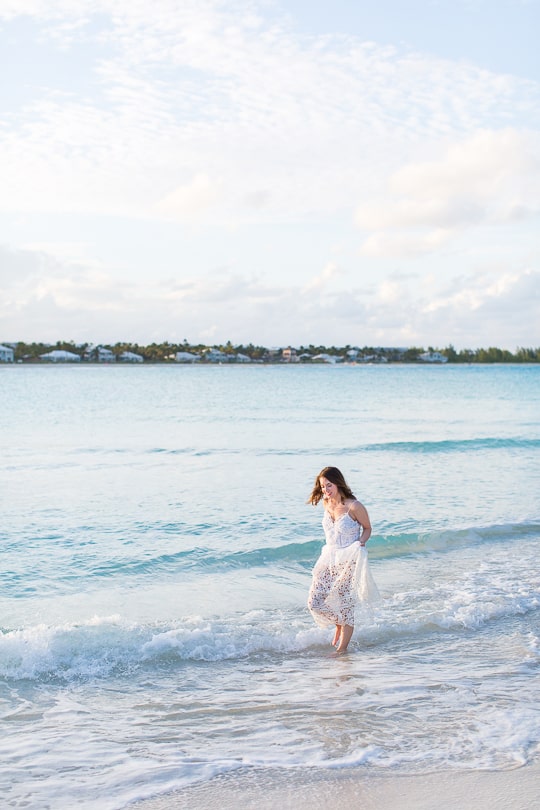 Have you all been to any ridiculously awesome all-inclusive destinations we should know about?! I’m already itching to go somewhere else! I really want to try St. Lucia, Barbados, and Turks & Caicos.

Spill your tips and secrets with us if you’ve found a hidden gem we should know about, too!

31 thoughts on “Our Trip to The Exumas & Sandals Emerald Bay”