Home / Behind The Blog / Yes, I Got My Eyebrows Microbladed…

Yes, yes I did! Actually I got my eyebrows microbladed back in October, and then the standard touch ups done in December, so I’m now officially all healed and finished!

I shared some of the process on Instagram stories at my first appointment, and a TON of you have been asking me about it since!

To show you the cold hard difference that good eyebrows make, I’m sharing my no-makeup, non-edited, horrible iPhone photo before and after shots. You’re welcome in advance.

I had mine done here in Houston by Theresa at Chic Lash Boutique, and had such a great experience. It hurt like trash (some say it doesn’t hurt at all), but apparently my pain tolerance is at a CAT 5 low.

For reference, if you’ve ever had a shaded tattoo, that’s what it feels like. I have three tattoos, but all are small and I thought this hurt worse.

I’m also notoriously resistant to numbing treatments, which is also important to note. Clearly I’m weird in more ways than you even knew, haha.

Do I absolutely love the results and would I do it all over again? Yes! Which I will do eventually. It’s only a semi permanent tattoo, so it will wear off within two years on average (more or less) of having them done, but it all depends on your skin type and how you care for them.

As for why I got them done: I really liked the idea of feeling more “put together” on days I don’t wear makeup, which is often these days. #Lazy. Plus the less makeup I buy or wear while still feeling confident, the better!

Now for the juicy details– 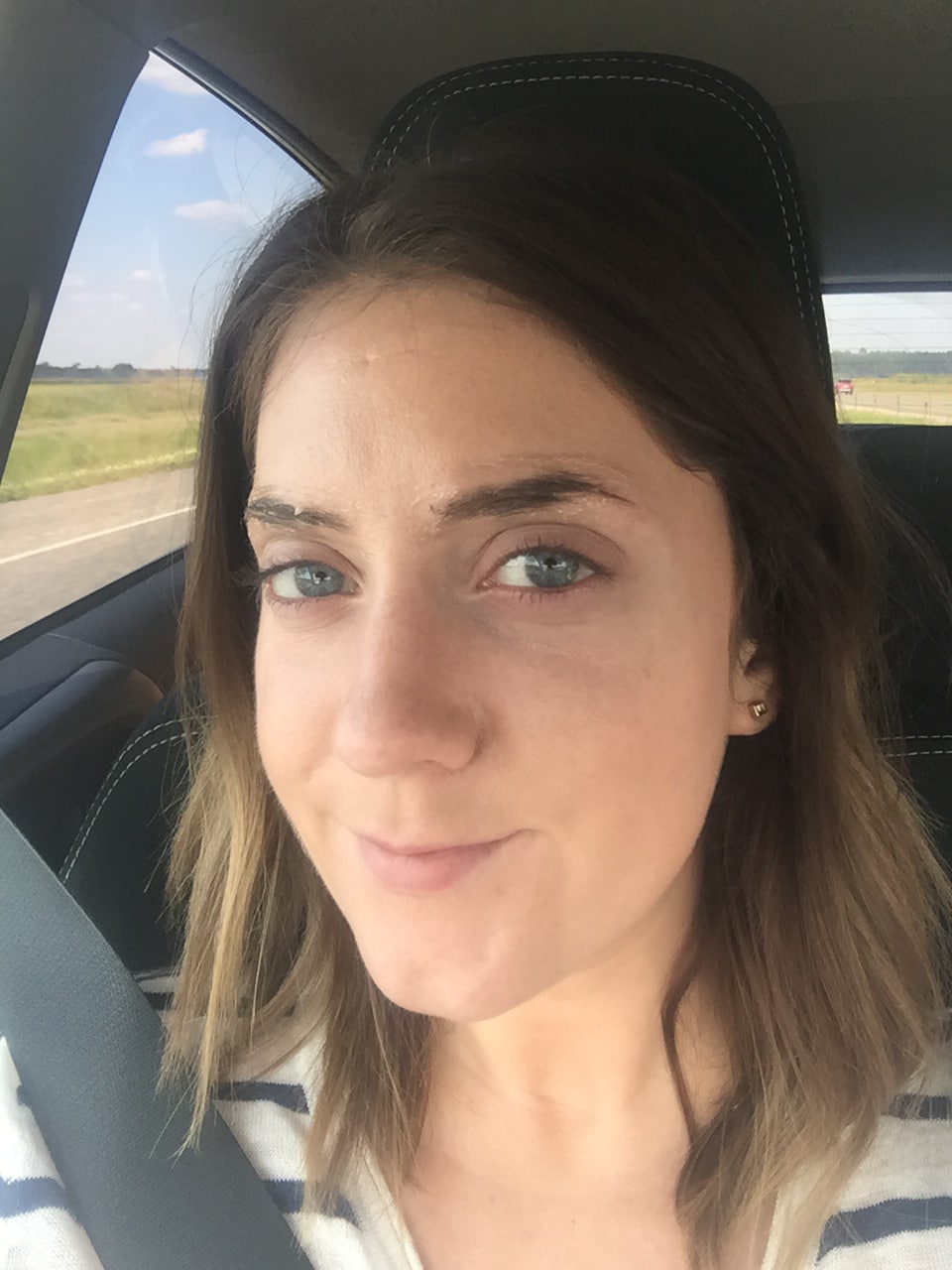 Above is me sans makeup and two hours before my appointment with numbing cream slathered on my brows.

At this point I also started getting nervous, so I drank two glasses of wine. Turns out that’s a no-no because of the amount you’ll bleed. Ha! I’ve never been one for reading the fine lines.

Below is me right before my appointment with no makeup, no numbing cream, and trying to pump myself up. You can see in this photo that though my eyebrow hair may be lengthy, but it’s definitely not full!

I blame my parents for letting me near tweezers in middle school, and I’ve never fully recovered. That’s a sob story for another time though. 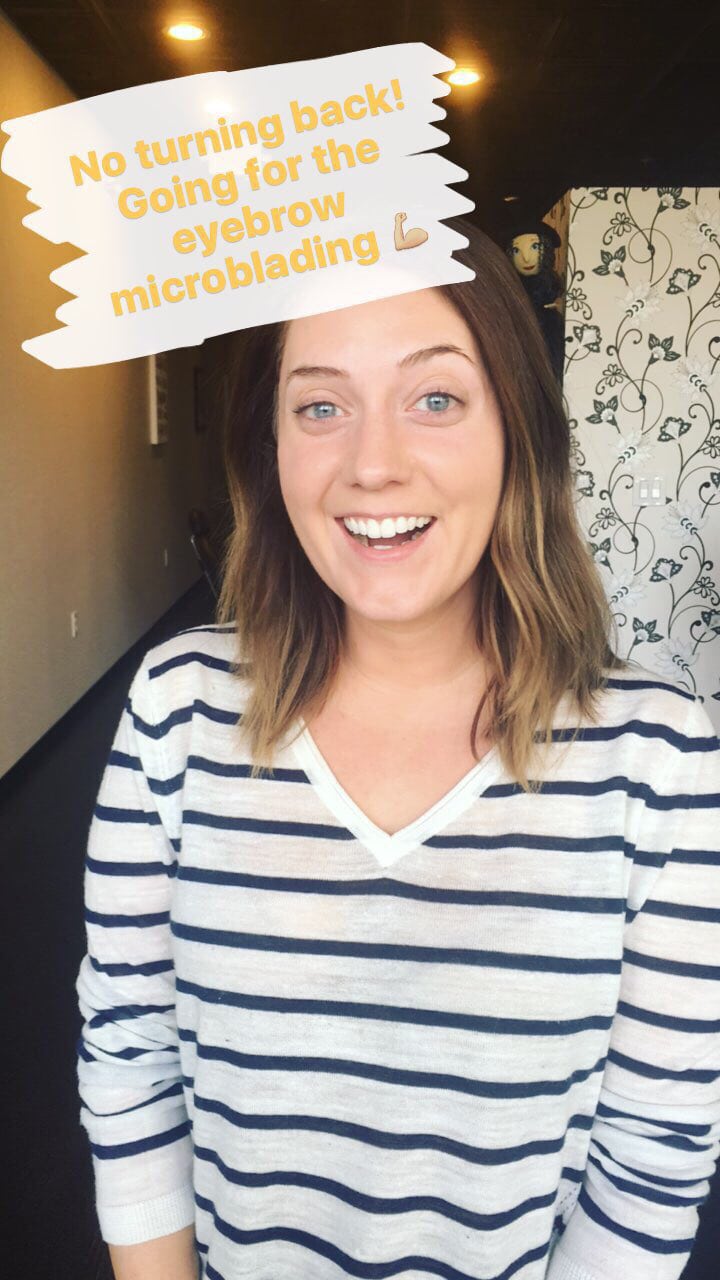 Despite my being super nervous, I totally trusted Theresa. We actually met a DIY event that I hosted a few months ago in Houston. She introduced herself while I stared directly at her and commented on how perfect her eyebrows were. Twas’ fate, because one look at her beautiful brows was enough to convince me, ha!

Kayla went with me to the appointment to A) document everything and B) laugh hysterically when I was trying to play it cool when I actually wanted to cry. We also both got our eyelashes tinted and lifted by Theresa (more on that below!), so she made herself comfortable in the corner with my phone while I got bladed.

This is me right before getting cozy on the bed with a chenille blanket. Clearly acting very calm, cool, and collected… 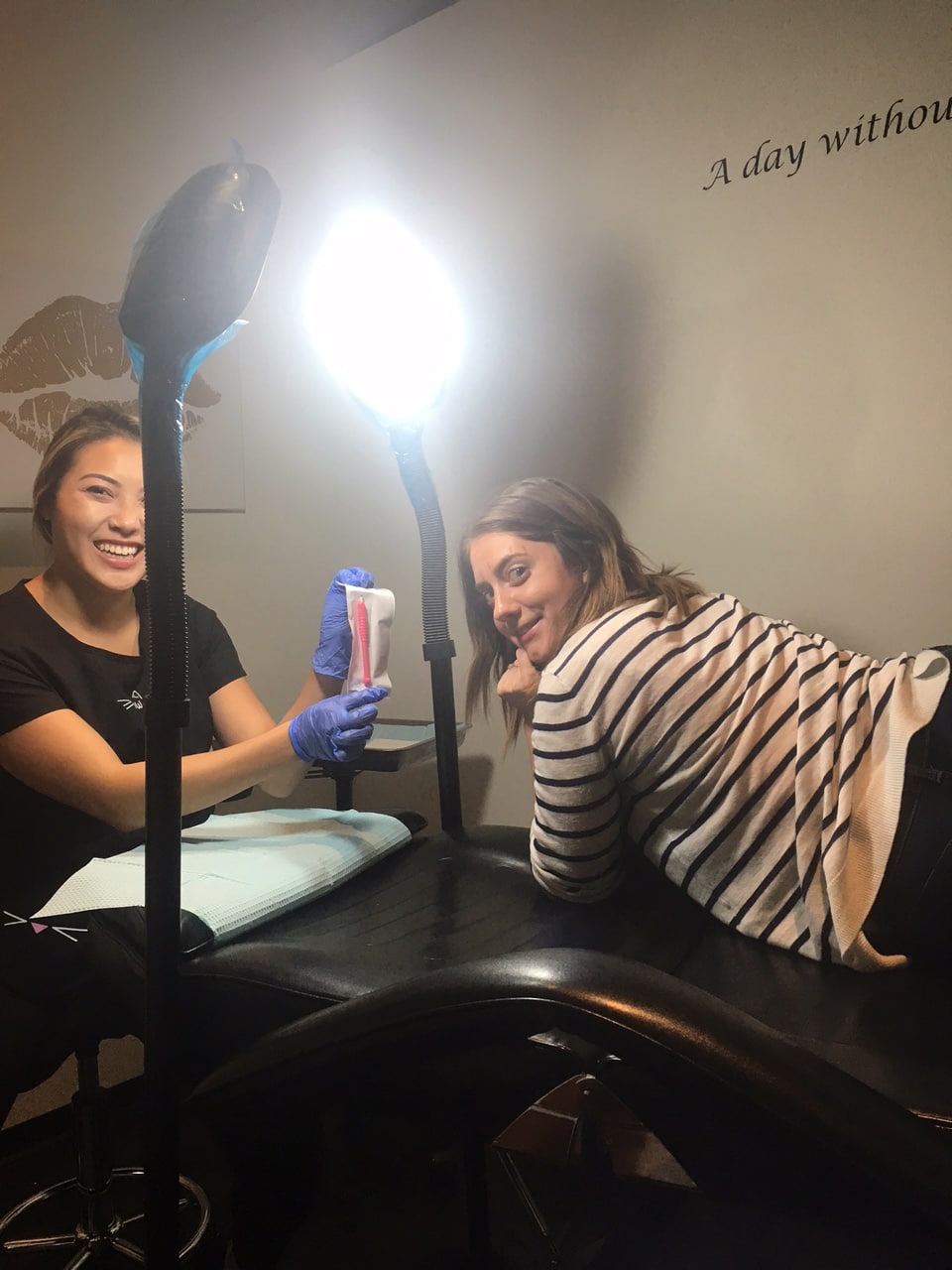 I decided to spare you the video of mine in action, mainly because it was horrible IG stories/snapchat quality that I saved to my phone, but also because I didn’t want my lack of bravery to deter you from getting yours done.

Why? Because even though I have wuss tendencies doesn’t mean you will! Plus the two glasses of wine before hand made the bleeding look scarier than it was, haha.

If you want the nitty gritty details and FAQ’s you can read them on their site, or watch video examples on Youtube! 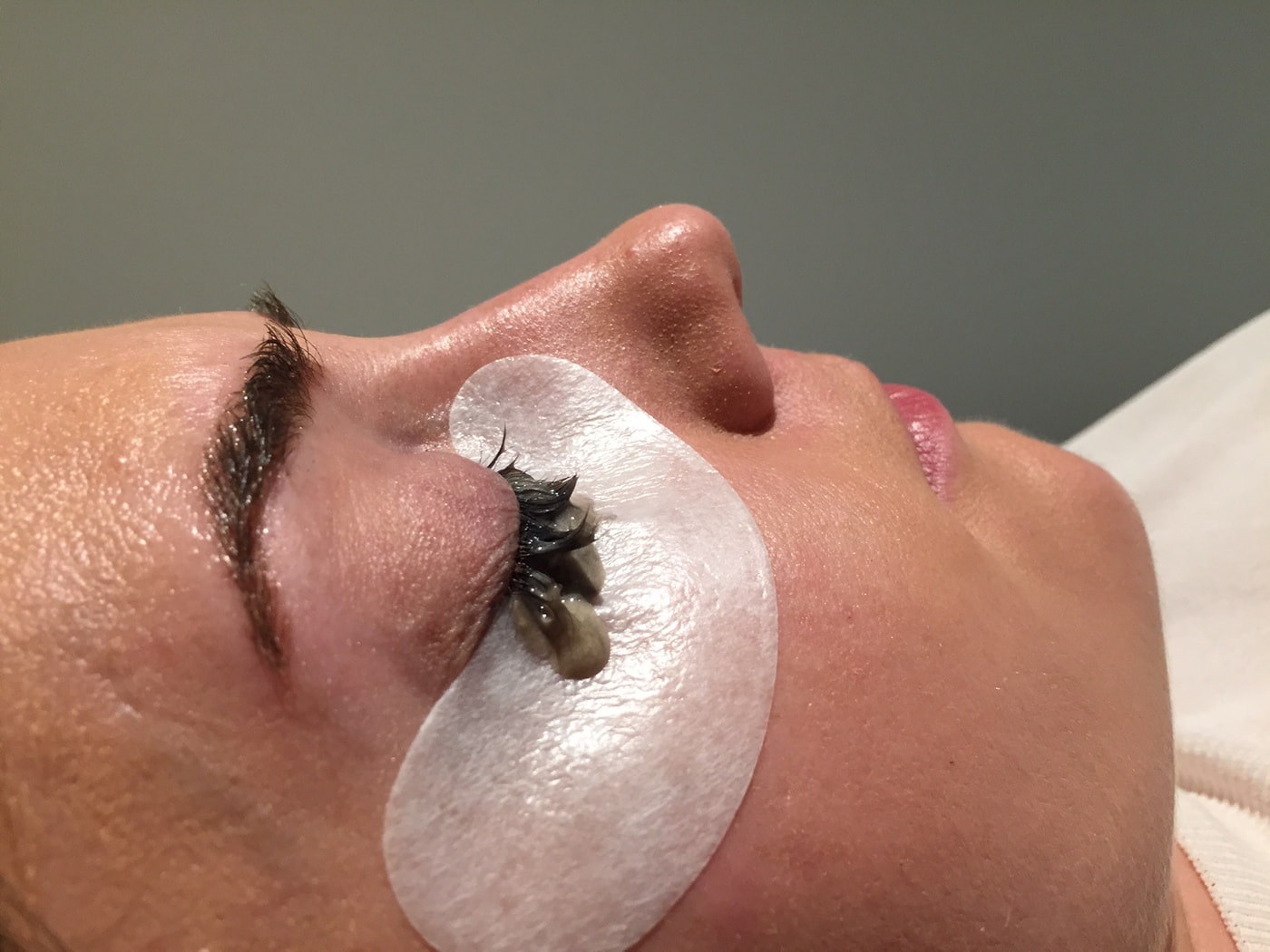 After my microblading was done, we went for the lash tint and lift. Even though this is totally separate from microblading, I felt the need to show you the process because the no-makeup, after photo of my eyebrows below looks even more impressive when you see my lashes. 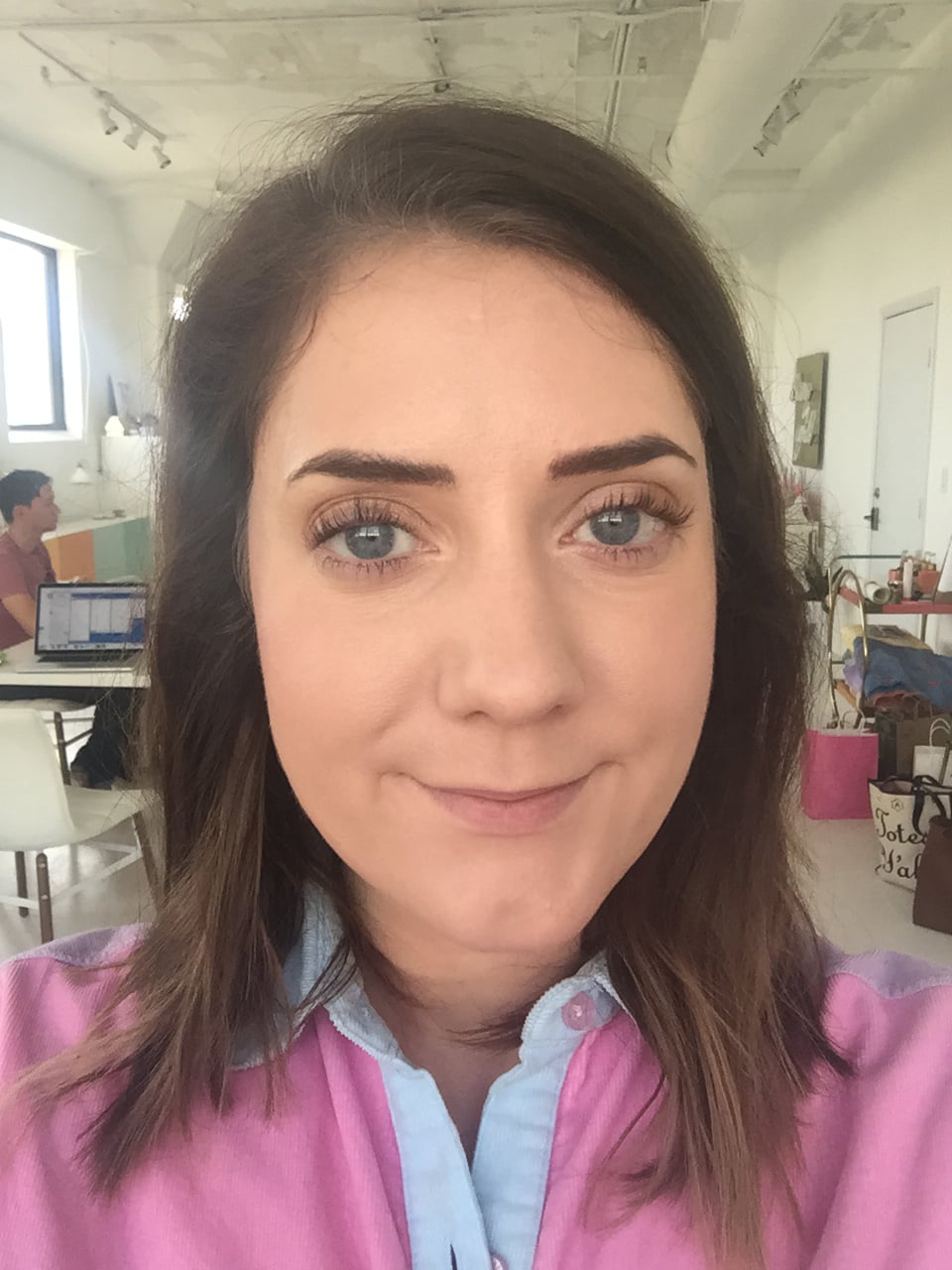 This is me after my first appointment with no eyebrow filler and no mascara. A CRAZY huge difference, right?! Granted the lashes only last 8 weeks-ish (but they’re my natural lashes, thanks for the good genes Dad!).

The tint and lift is just natural vegetable dye and perming basically. Would I get the lash lift regularly? No, but I definitely would for a vacation, long beach trip, or before an occasion like a wedding.

Once my first appointment was over, I had to keep ointment on my brows constantly for 10 days, plus avoid any contact with water or sweating. The sweating wasn’t so bad since it wasn’t Summer here, but the ointment and not fully washing my face was a doozy. I felt like a slicked back watch salesman, but it’s fine.

After about 7 days of healing, my eyebrows were FULL ON FLAKING. Like bad face dandruff. Not my cutest days, but still worth it. After 8 weeks of healing, there’s a standard touch of procedure which is great if you want to add more to the shape, darken the color, etc. 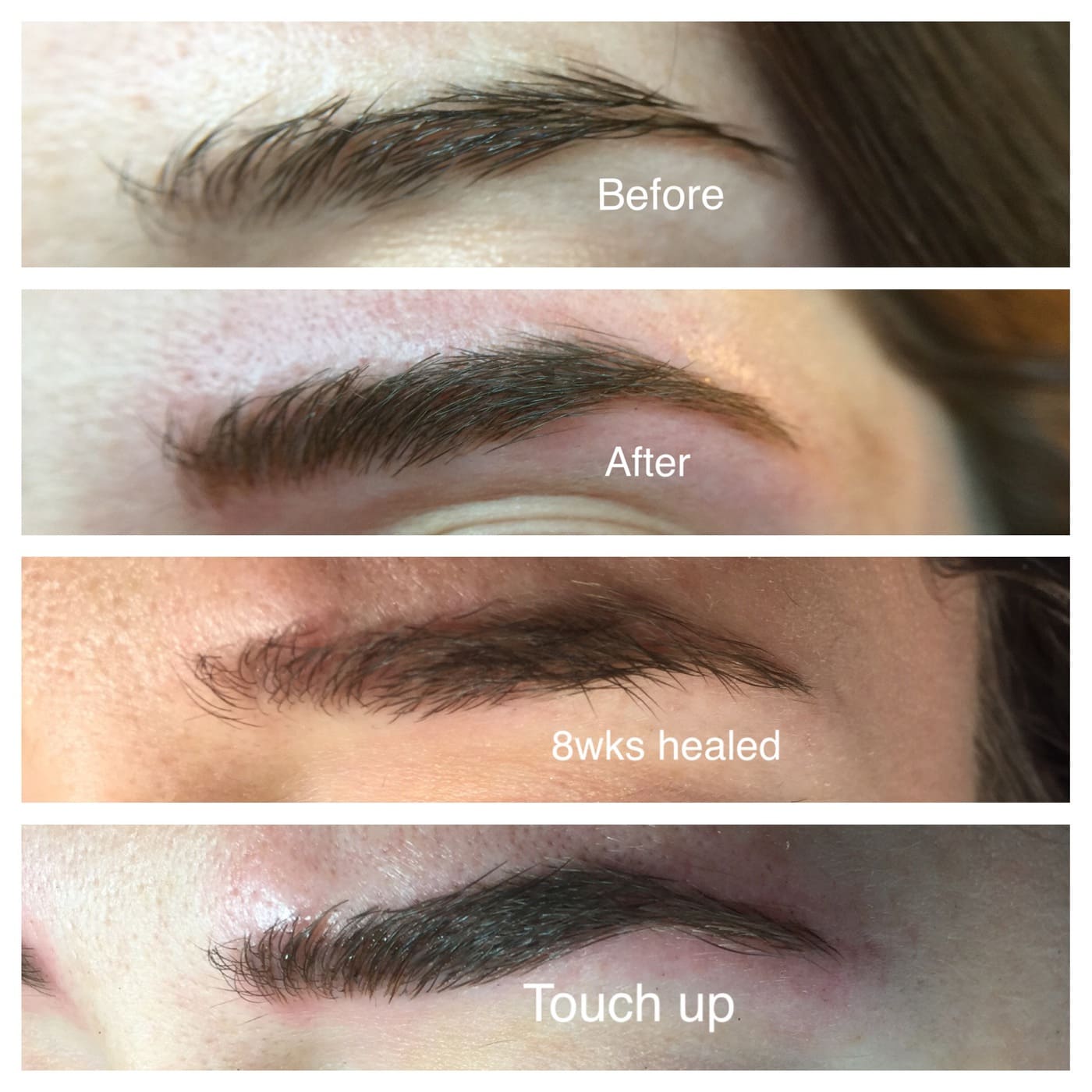 I went slightly darker the second time around because once you heal, the color fades a bit. Immediately after the procedure is when it’s the darkest it will ever be.

I love the way the final shape, color, and look turned out. If you’re considering getting it done, I TOTALLY recommend it. I’ve already sent a handful of people Theresa’s way at Chic Lash! Lastly, if you have any q’s about the procedure that I didn’t touch on, let me know and I’ll answer in the comments!

If you do not mind, if ever anyone of your readers is in LA they can visit our Microblading Los Angeles Clinic if they want their eyebrows microbladed as well.

Thanks for documenting your experience through your blog, and yes, a lot of people feel nervous whenever they good for microblading for the first time. The results for your turned out great!

Thank you for posting this. What a great article and you tell a great story. https://www.i-brauhaus-seattle.com/

Its very helpful for women and girls and i really like your content. i am an artist means i am an eyebrows artist and i loved your blog.
Eyebrows by Judith is an incredible platform that provides an opportunity for every woman to discover themselves in an amazing way by achieving great eyebrows.

Thank you, Judith for checking us out!

You look so gorgeous! thank you so much for sharing your microblading experiences.

Thank you, Johnathan! We got a lot of questions about our experience so wanted to write a post about it!

You look so beautiful! thank you so much for sharing your microblading experience.

Thank you! We are so glad that we did it.

You have some quality information here that any reader would enjoy.

Such amazing tips, I love these sort of posts because there is always something new to learn in beauty and knowing the tips & tricks can make life so much easier.

Girl, you look incredible. If you were in knoxville, id give you free touch ups just cause I had such a great time reading this article! ;)

Girl, you look incredible! If you were in knoxville, I would perform free touch ups just cause I had such a fun time reading about your experience! ;)

I’m not sure if I am a microblading failure or not, but the first week as mine were healing and flaking, the pigment was disappearing as well. I have to take out my eyebrow pencil and fill in. I got this done so I wouldn’t have to use a pencil anymore. So disappointed. I am going back to have them checked this Sunday, May 20th, and hopefully figure out what needs to be done. Any suggestions? I would greatly appreciate your ideas.

Love your blog and the helpful advice. I own a beauty salon in Las Vegas and I offer microblading service.

Wow these are really well done! Microblading is the way of the future!

Hi! I’m curious how your brows look once they have faded over the year! Do they turn a color? They look great by the way!

Hey Nicole! thanks so much! The color never changed, they just faded over time. xoxo

Keep up the good work!

Wow!! The results are amazing. I’m going to share this with a few women who need some work on their brows.

Thank you so much, Andrea! xo 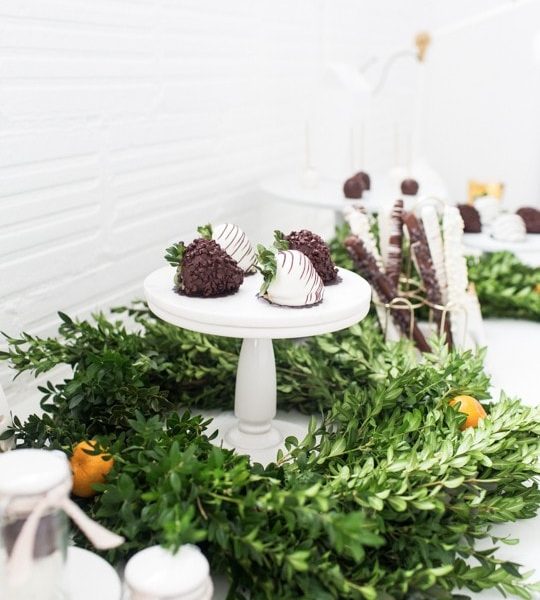 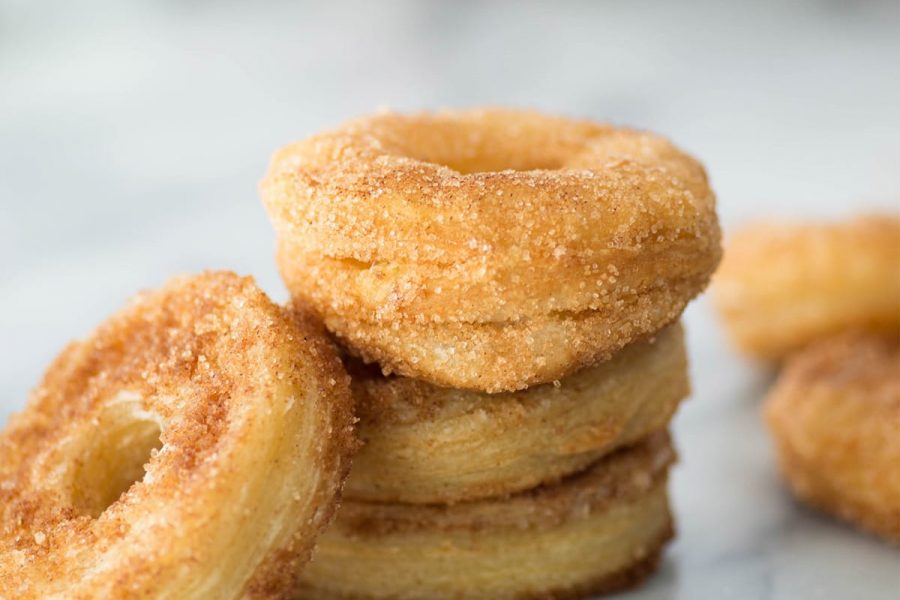 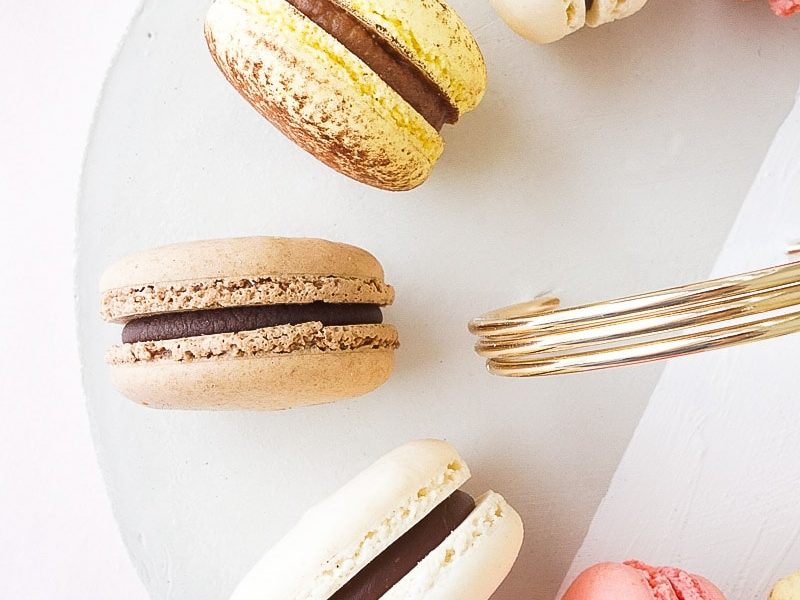 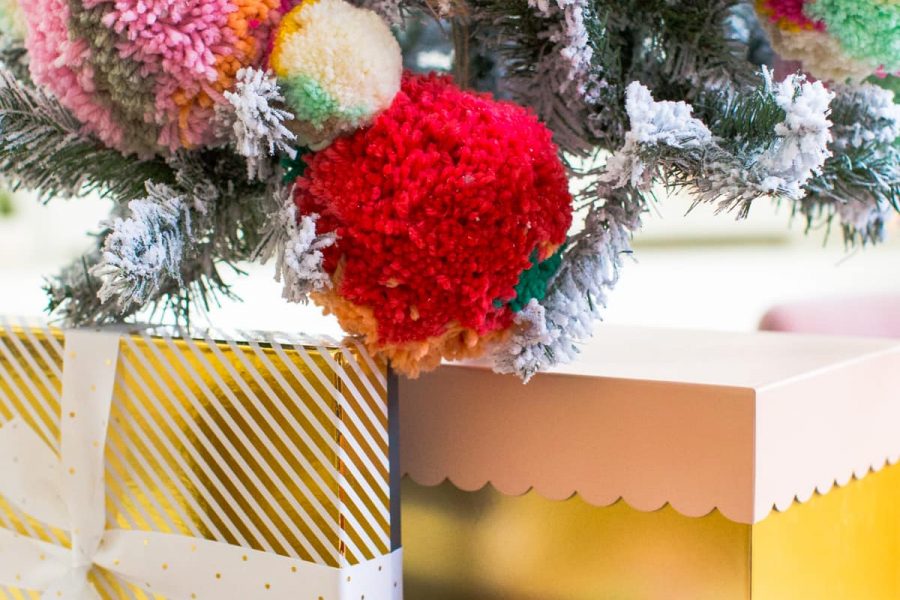 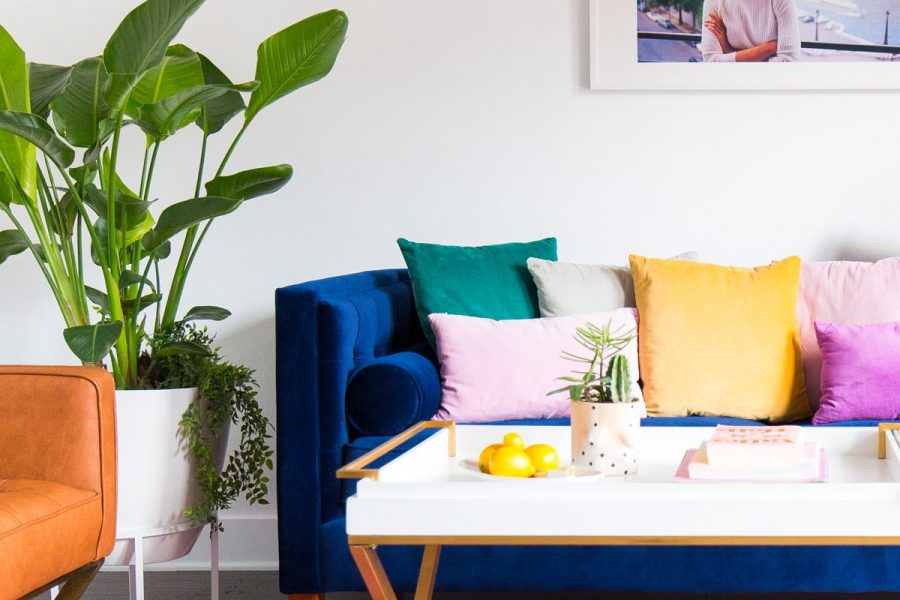 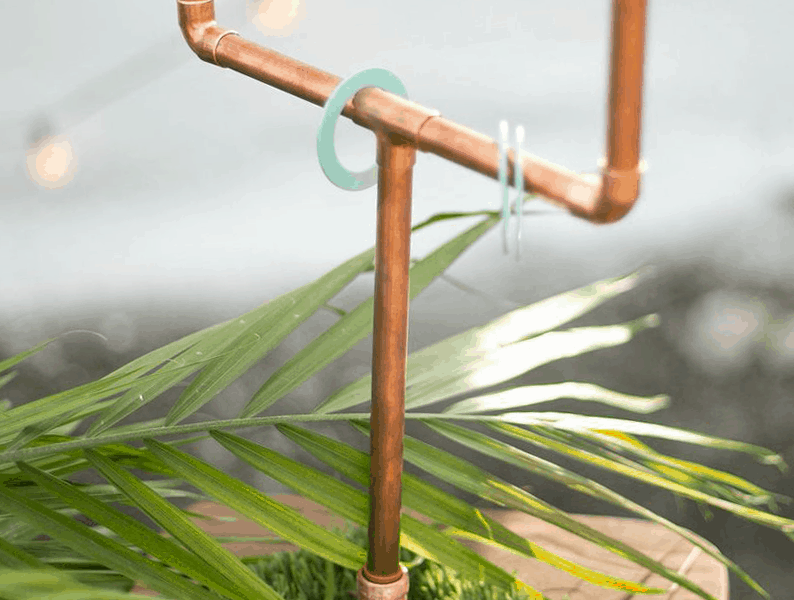 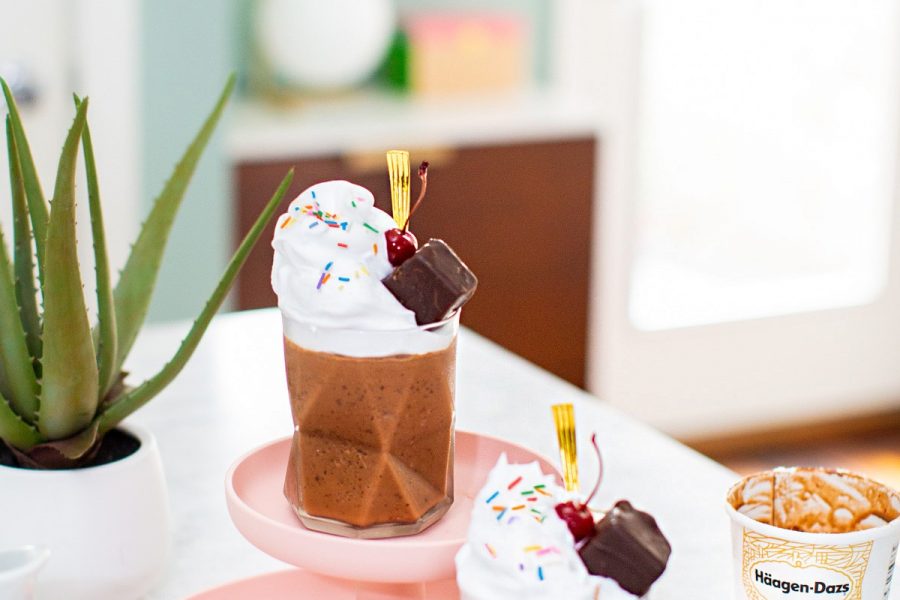