A Before & After Of A Simple Bedroom Makeover —  It doesn’t get much better than a before and after simple bedroom makeover as an engagement and house warming gift, does it?! 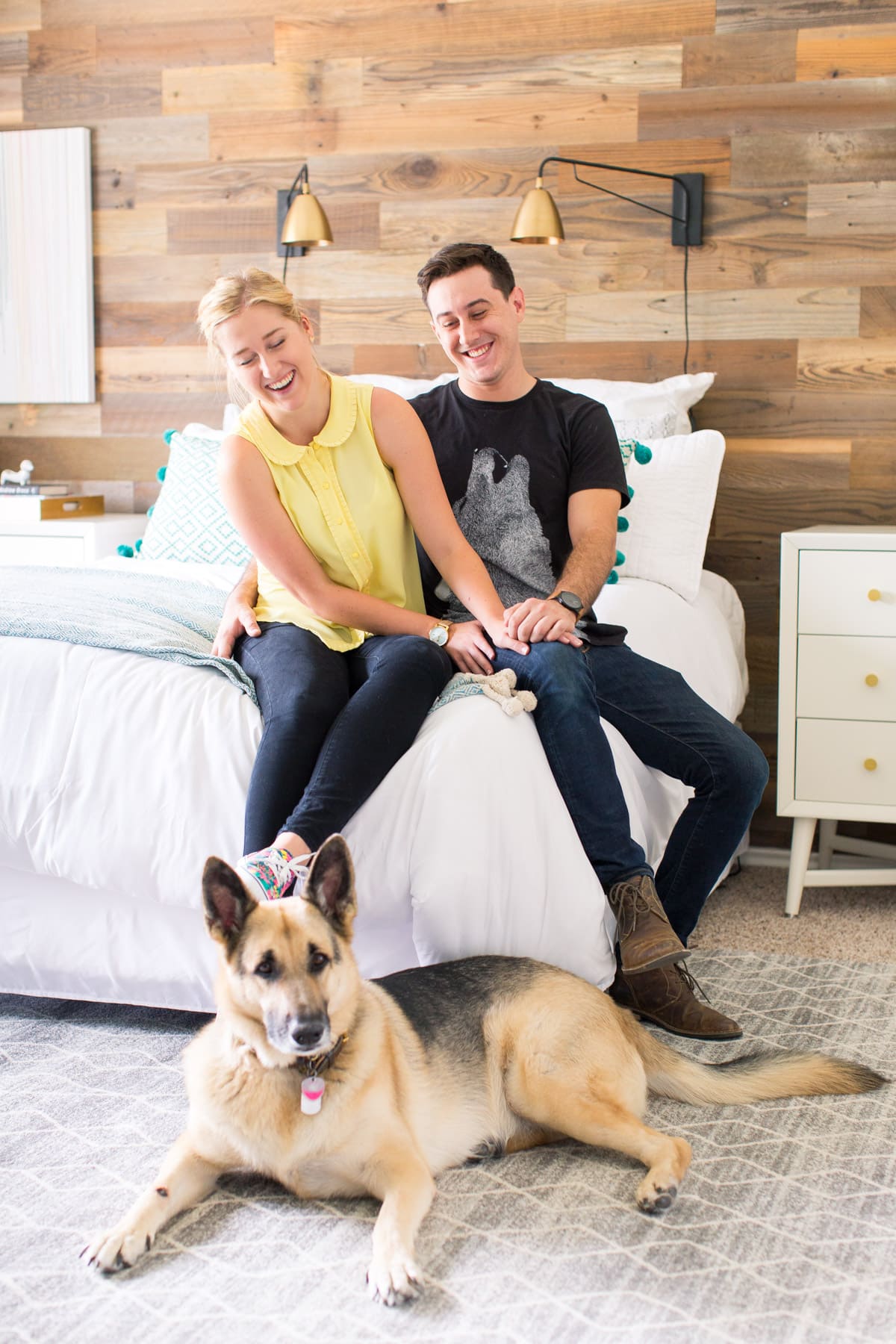 I hope you all are ready for some home decor action coming up. Because we’ve been very busy with this whole makeover thing!

I blame my out of control desire to be a homeowner. Basically, no one with an empty room is safe around me these days.

First up is a before and after simple bedroom makeover that we worked on for Jared’s sister, Caitlin and her fiancé, Zach!

They got engaged a few months before us, PLUS bought a house the same weekend. Talk about lots of Smith family confetti throwing my friends. You don’t even know!

I also happen to pride myself on having loved Caitlin before Zach (simply on account of knowing her before they met). But that’s a love story, I’ll save for another time.

The house they bought was already pretty updated… minus dark wall paint, some poor lighting choices and a few not-so-modern hardware/window fixtures from the previous owners.

Of course, we included glamour shots of the said ugly fixtures in the before shot below… 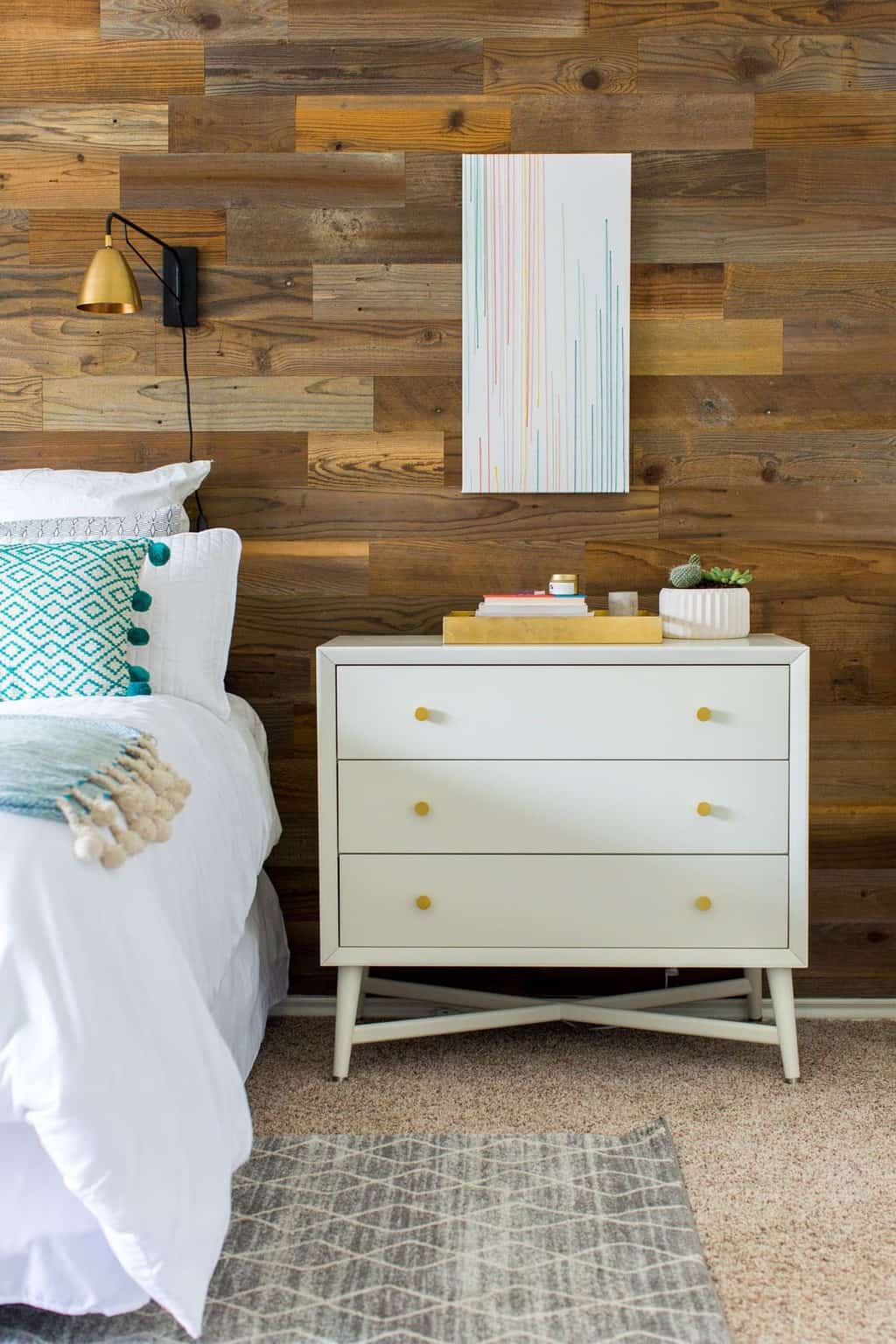 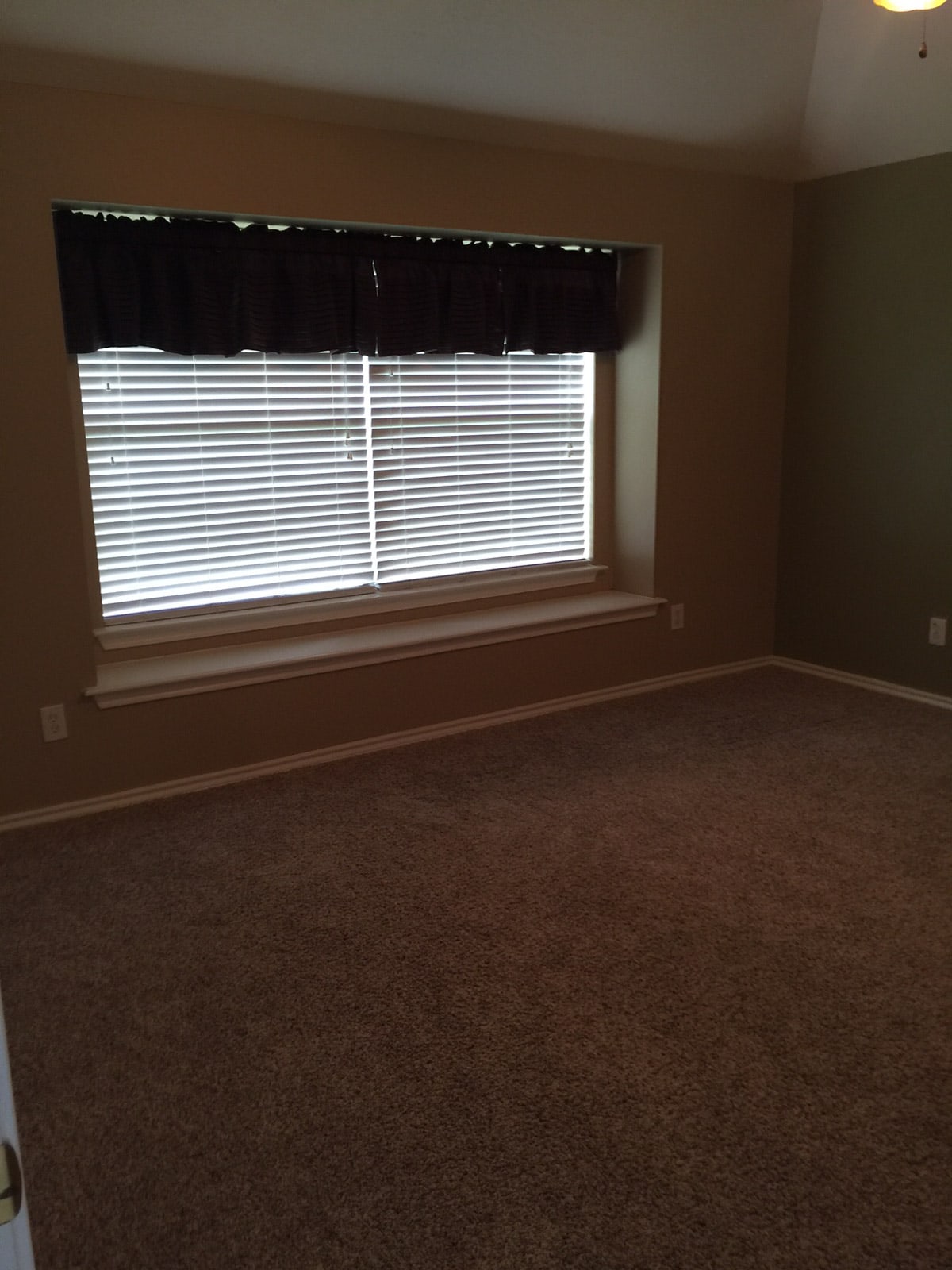 If this doesn’t prove that poor room lighting doesn’t make all the difference in the world, I don’t know what would!

They did most of the leg work before we got there for the fun furniture part. The first thing that had to go were those window treatments.

They also painted most of the house a pale, modern grey for a neutral tone to build from.

To play off of our popular DIY Stikwood headboard project, Zach really loved the idea of creating an entire Stikwood statement wall behind the bed in lieu of a traditional bedframe.

In an ideal world, we would have replaced the carpet with hardwoods like the rest of the house. But we kept this update super simple by only switching out minor elements. 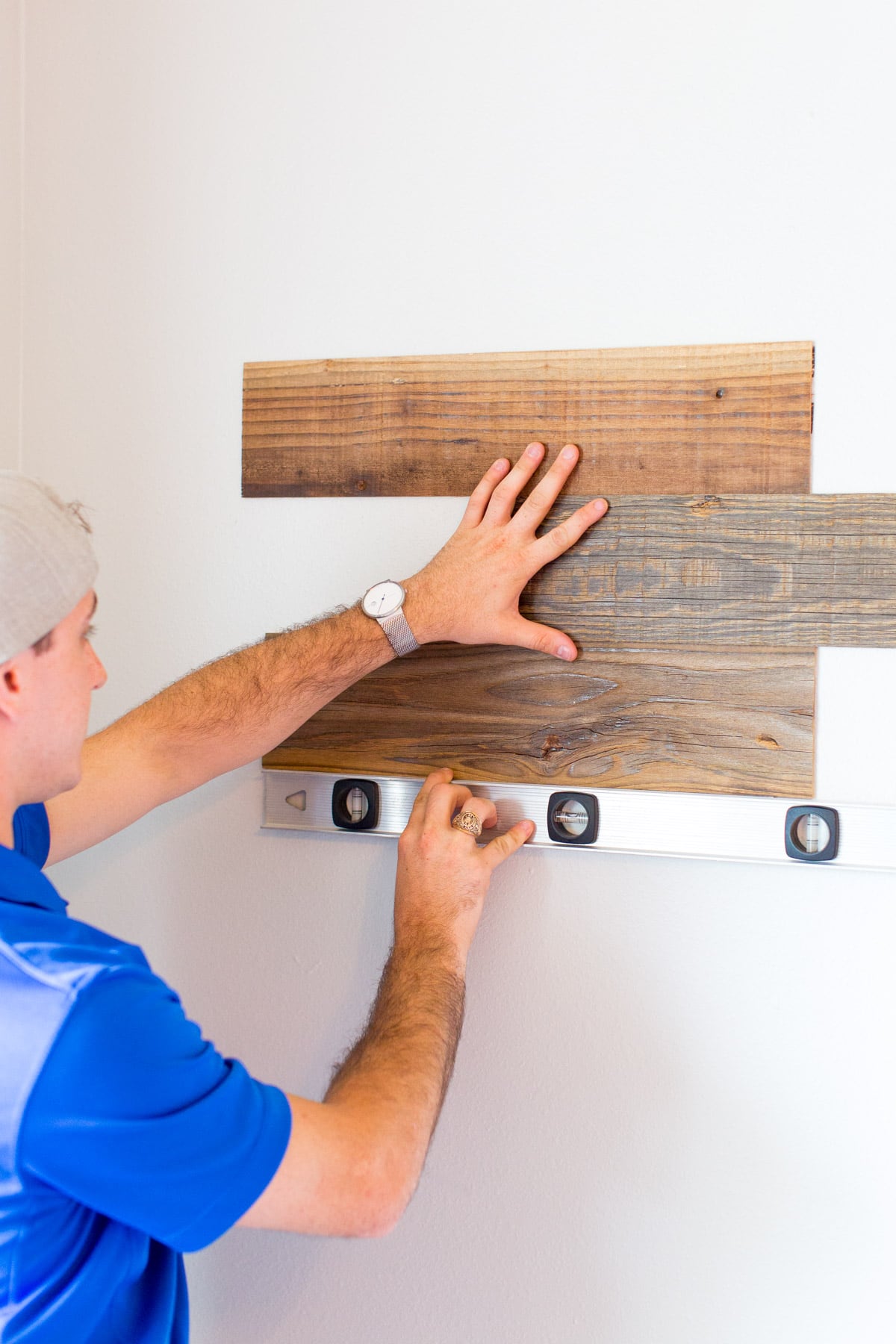 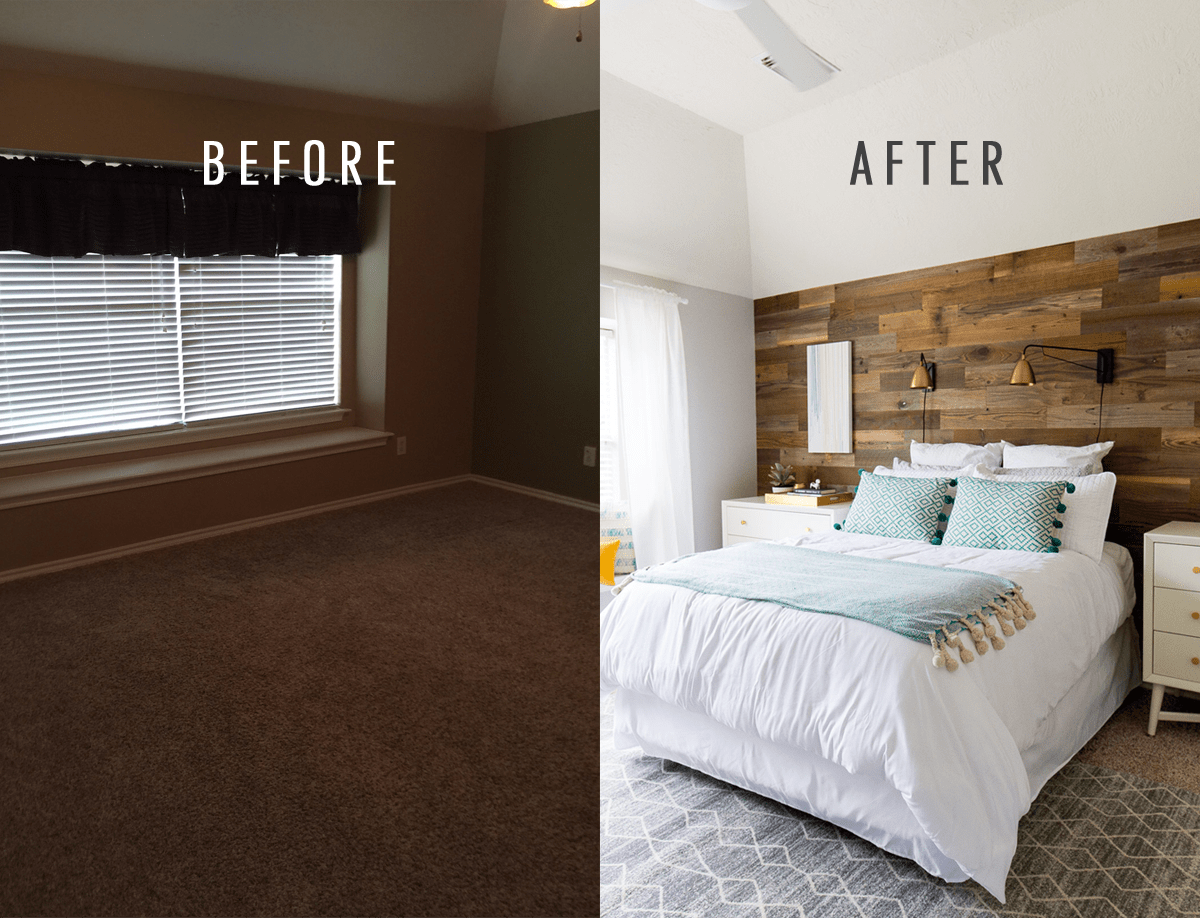 To break up the carpet from the finished Stikwood wall, I chose a neutral grey rug with an abstract pattern to layer on top of the carpet. It seems counterintuitive to layer carpet on carpet, but hey, whatever works in the visual department!

I wanted to keep the lighting and artwork on the Stikwood wall simple so we weren’t covering it right back up, but I still wanted to distinguish the spaces over the white Dwell Studio dressers (we switched the original knobs out for these gold versions) that we used in place of nightstands. Instead of trying to find artwork in our budget that was the right size, color, and style for above the dressers and the other side of the room, I just whipped some up myself using blank canvases from the craft store.

The two pieces over the dressers I made my gluing strands of embroidery thread in neutrals and colors that would pop. For the opposite wall, I painted a teal watercolor print to tie in the fun pom pom pillows on the bed. 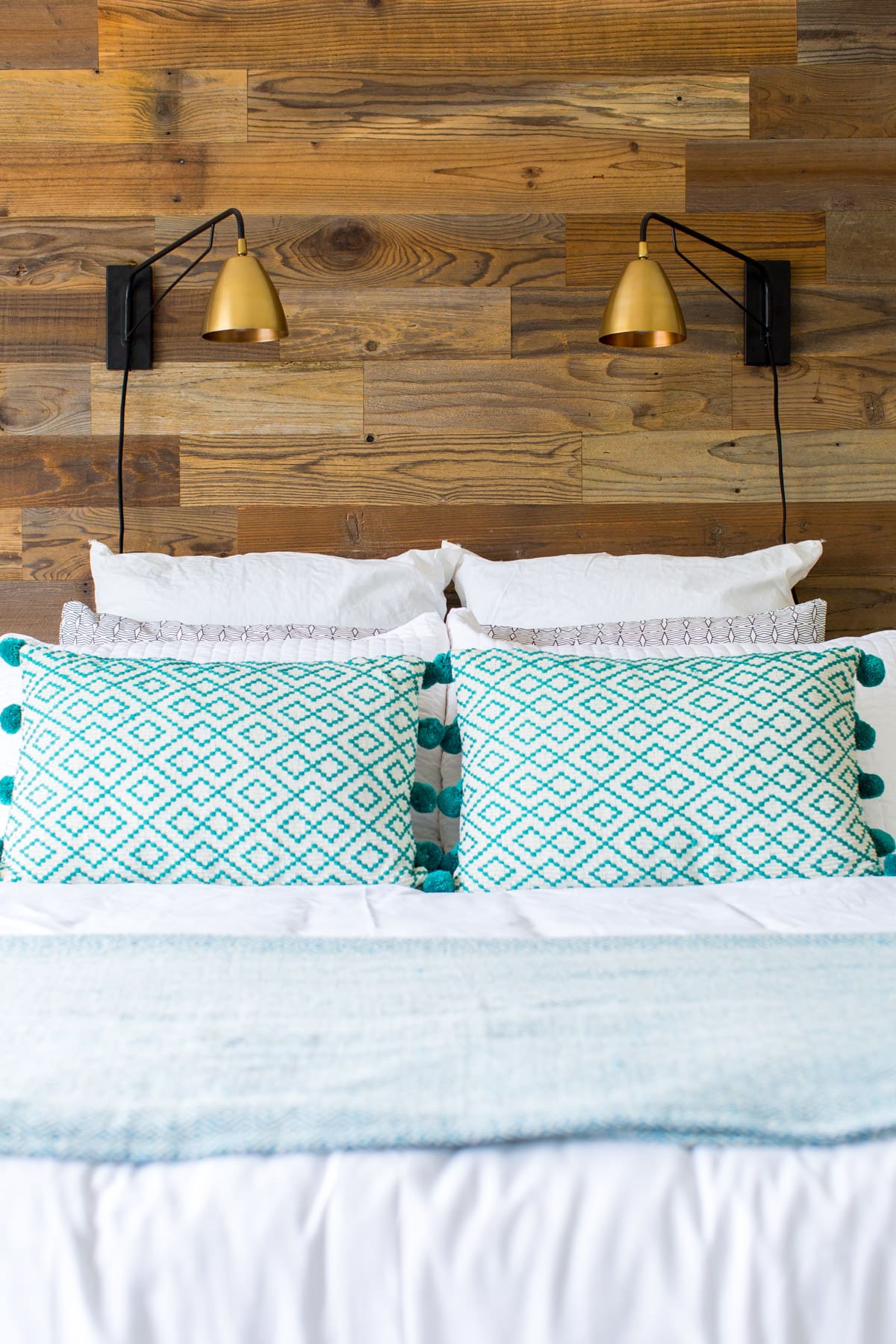 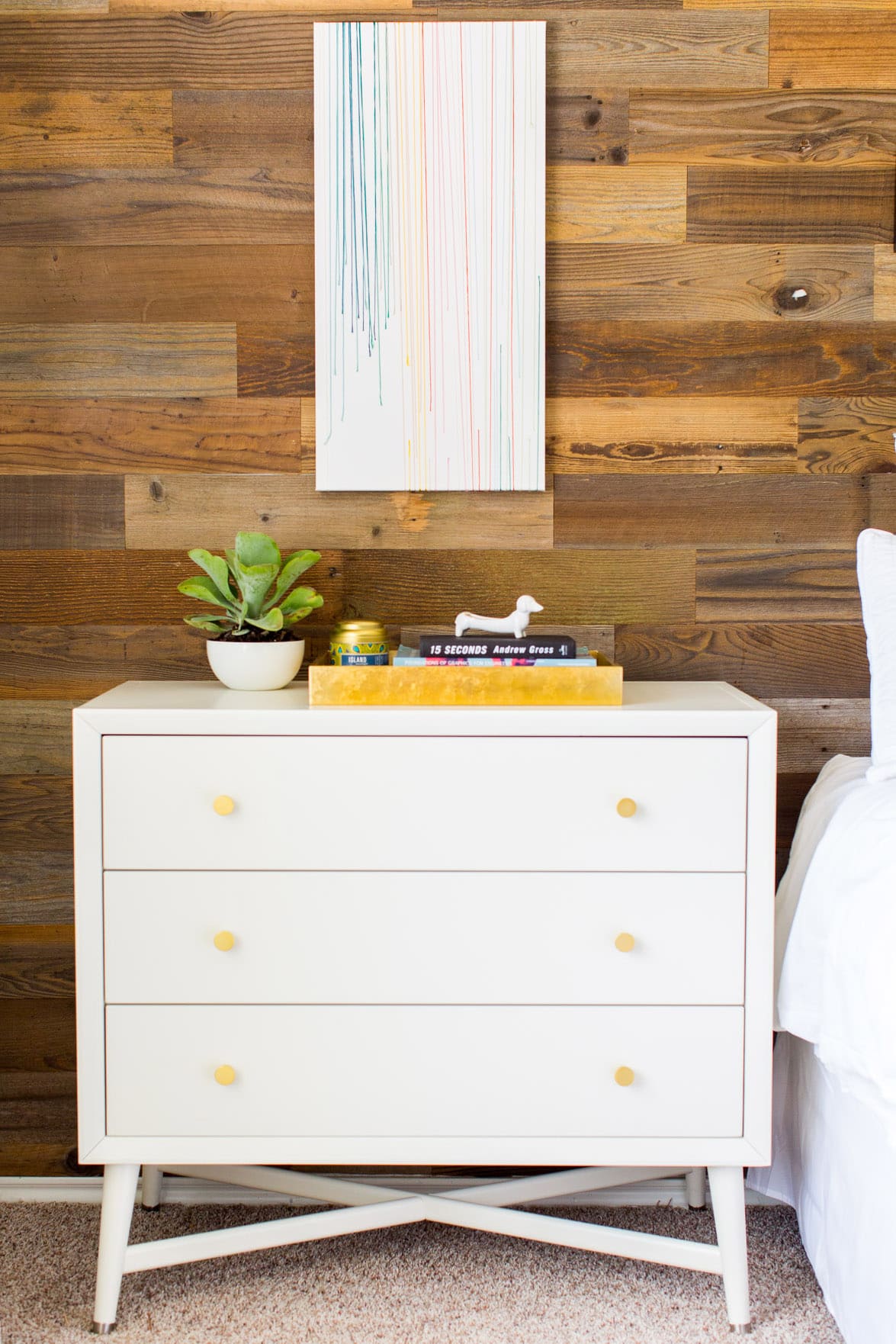 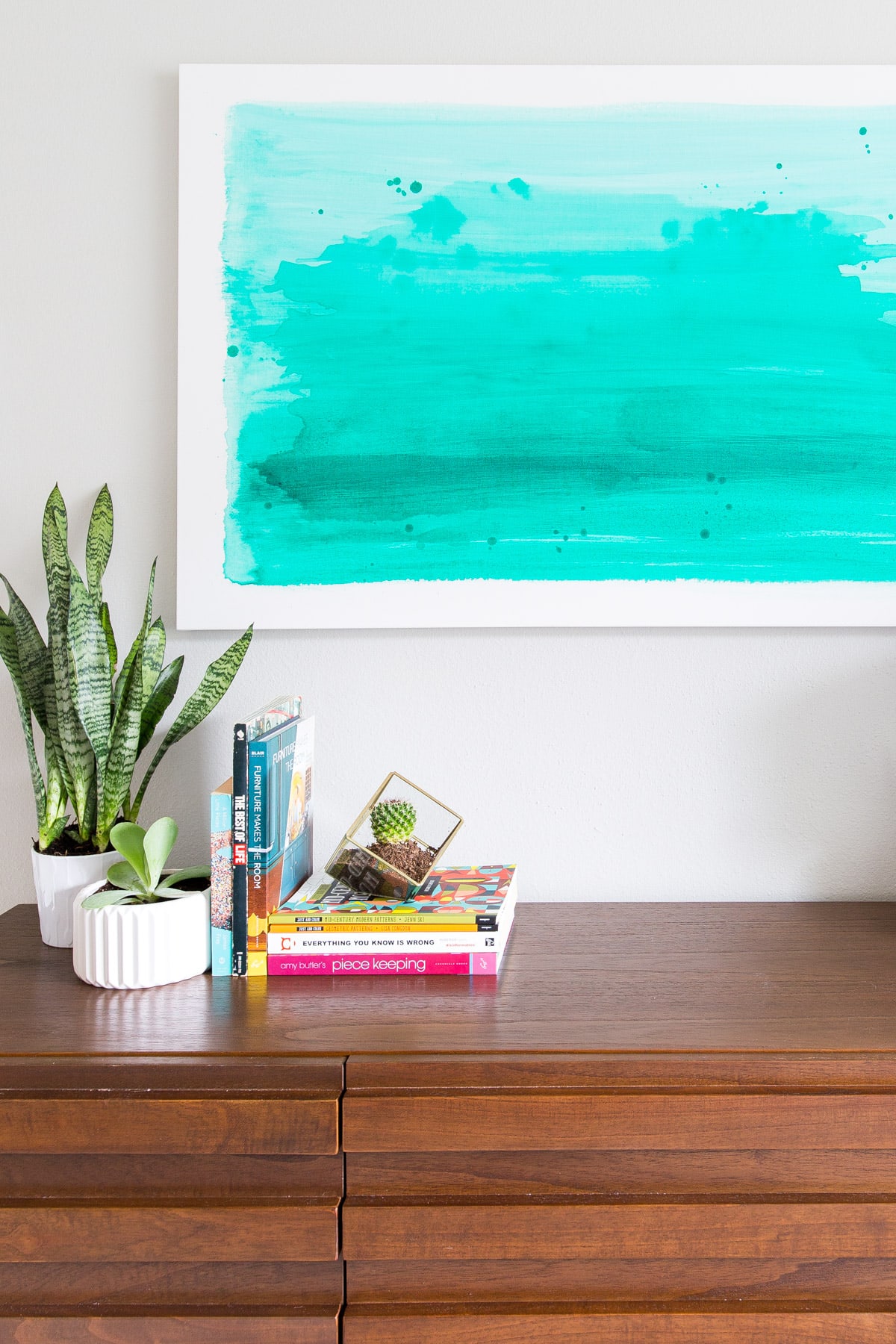 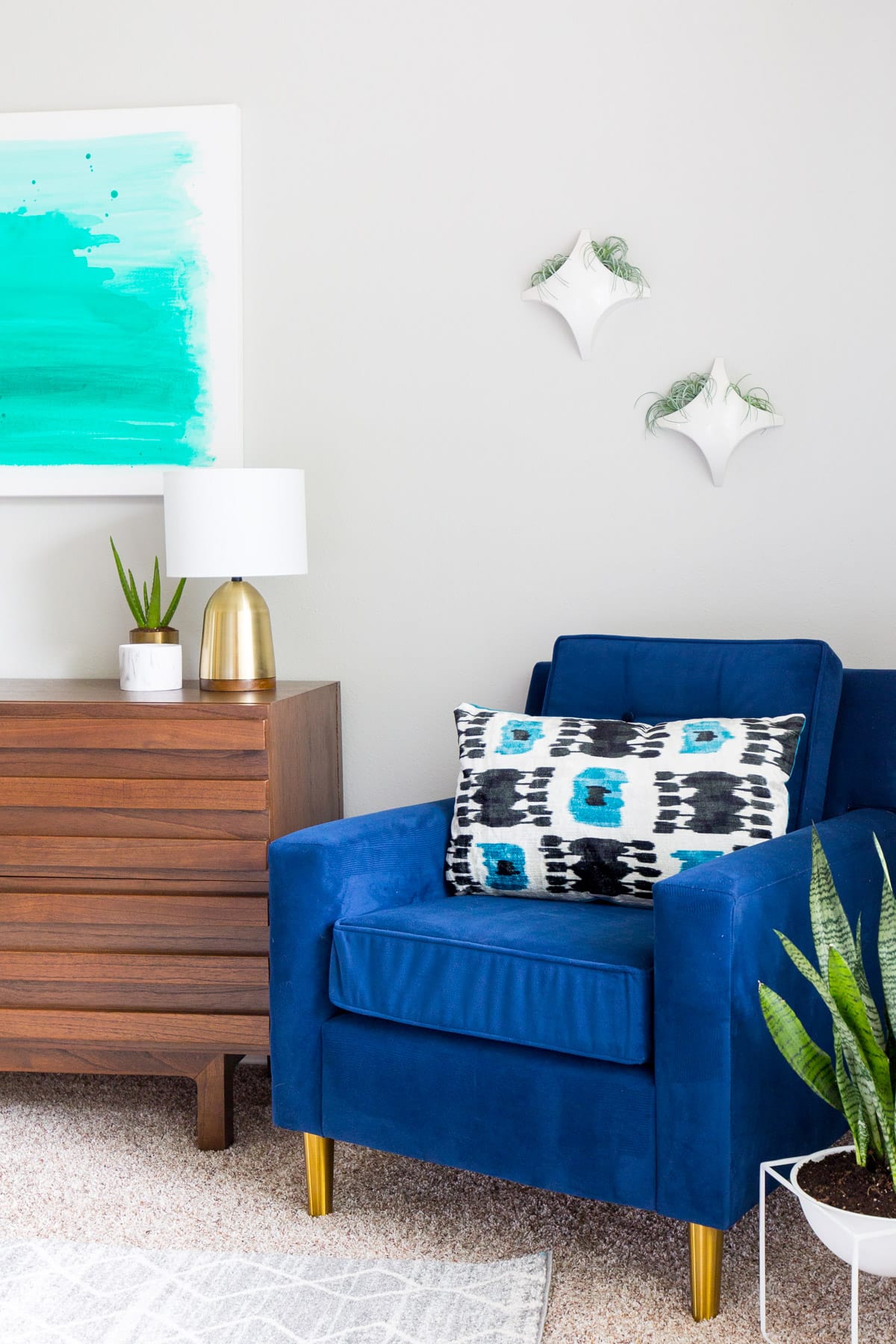 The opposite wall of the bed was a bit trickier because it was too big for just the statement dresser that we chose but not quite big enough for a full chair and lamp to go with it as a reading area.

I ended up going with a cool mod planter with a snake plant nestled with this velvet navy side chair, and skipped the floor lamp idea so it wasn’t too cluttered. 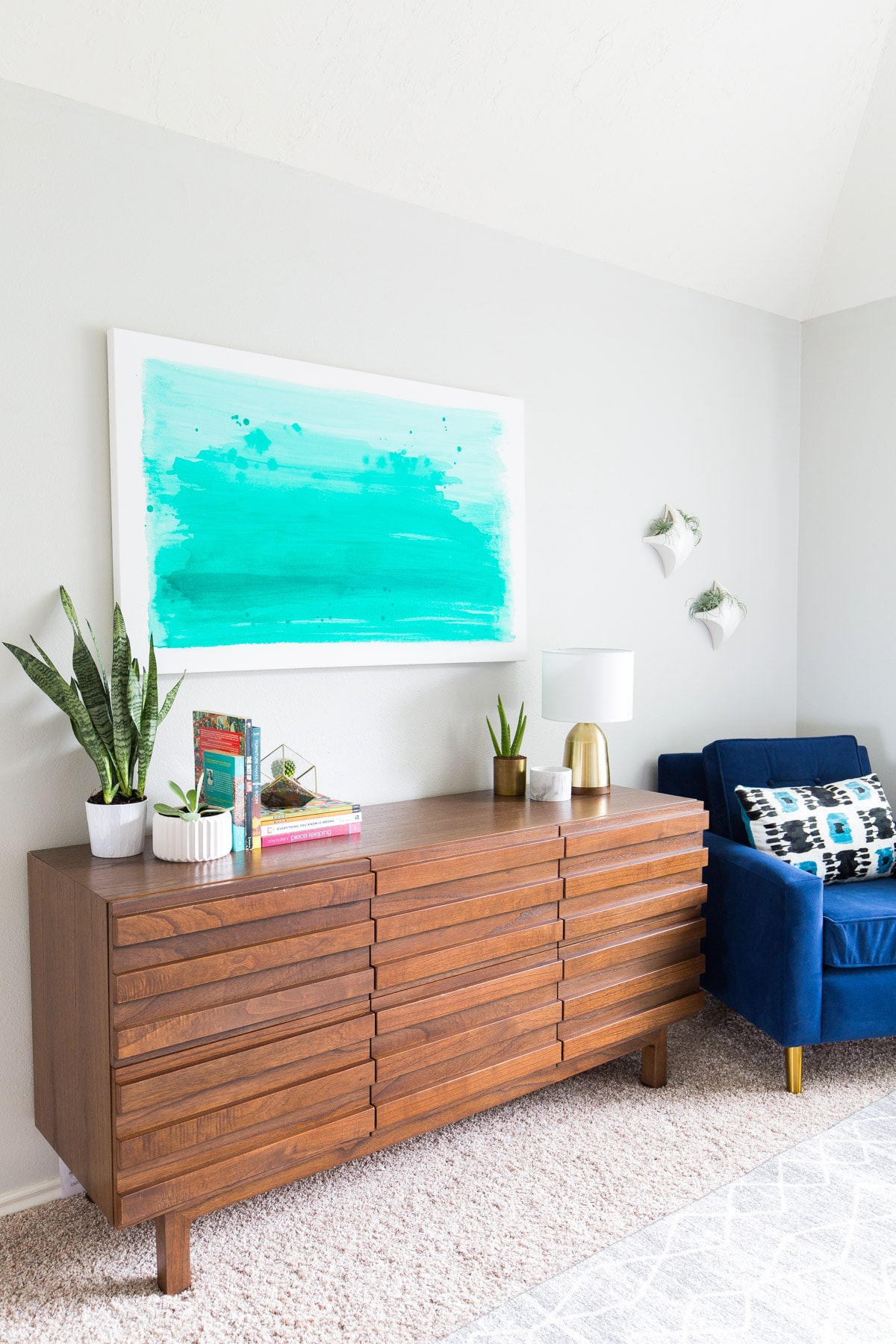 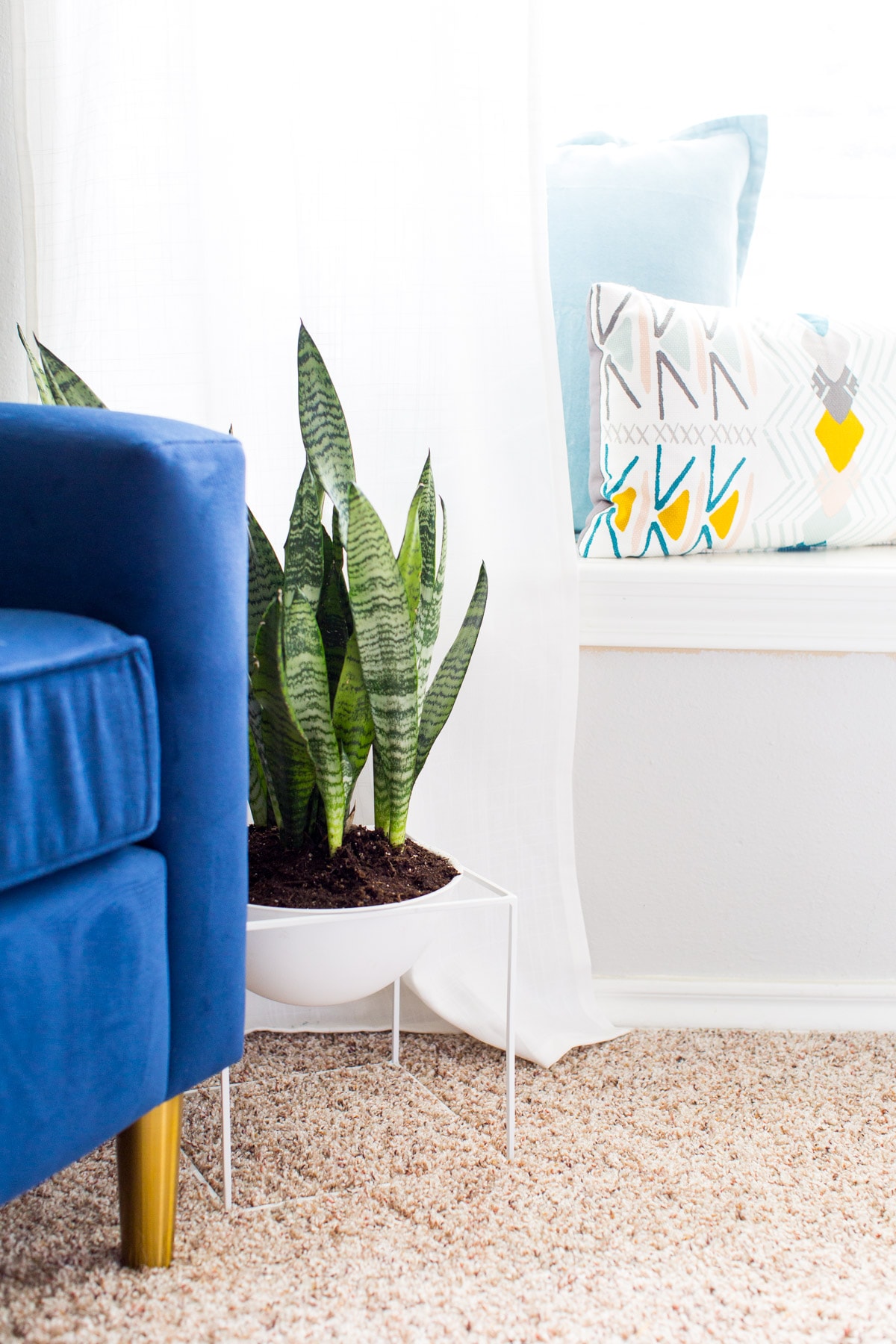 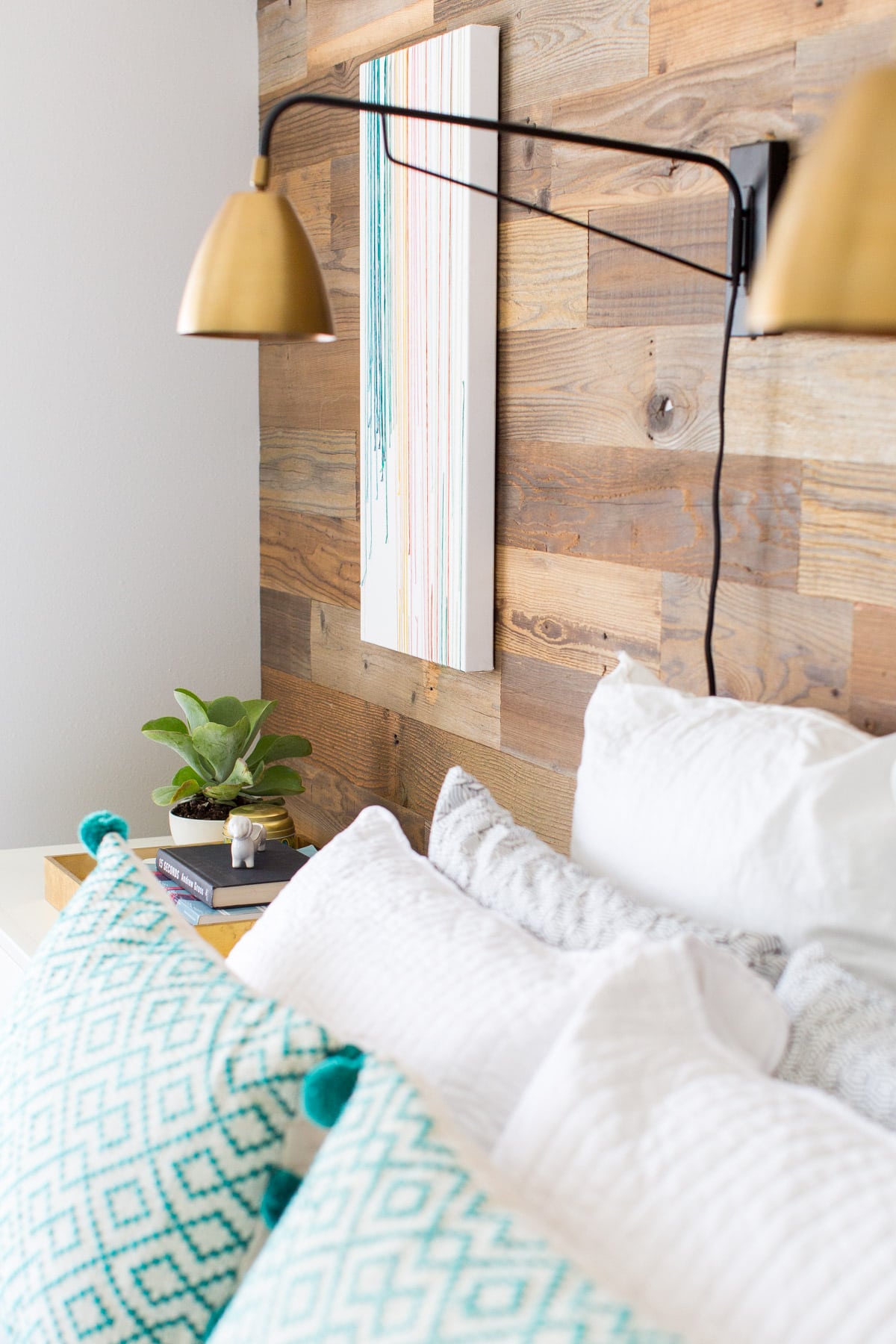 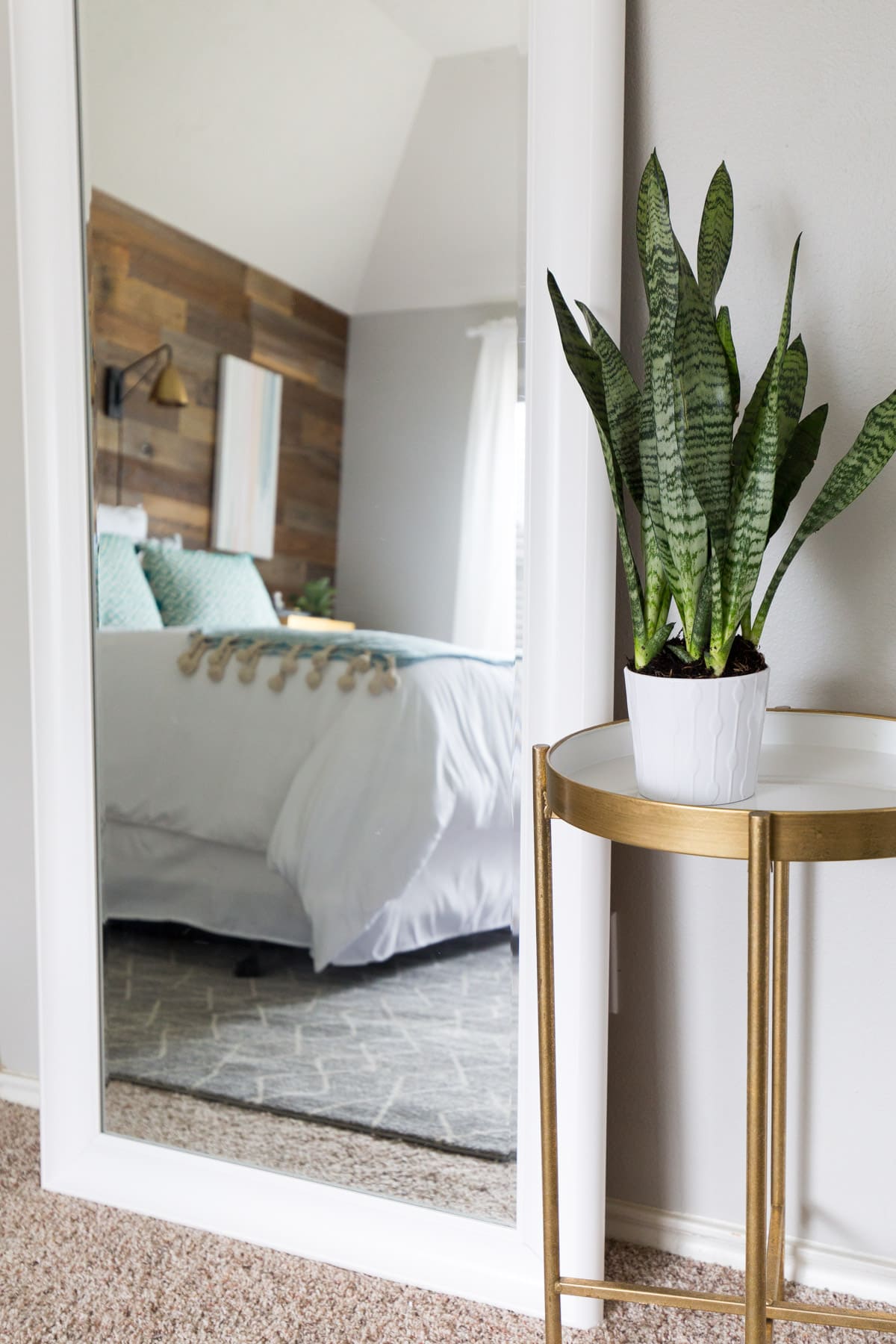 How To Balance The Furniture Placement In A Bedroom

To make sure the room didn’t feel as though it only had furniture on two sides, we added thin white curtain panels and accent pillows on the seated window ledge.

I also used a cute gold accent table with an oversized floor length mirror leaning next to it as a focal point at the entrance of the room. 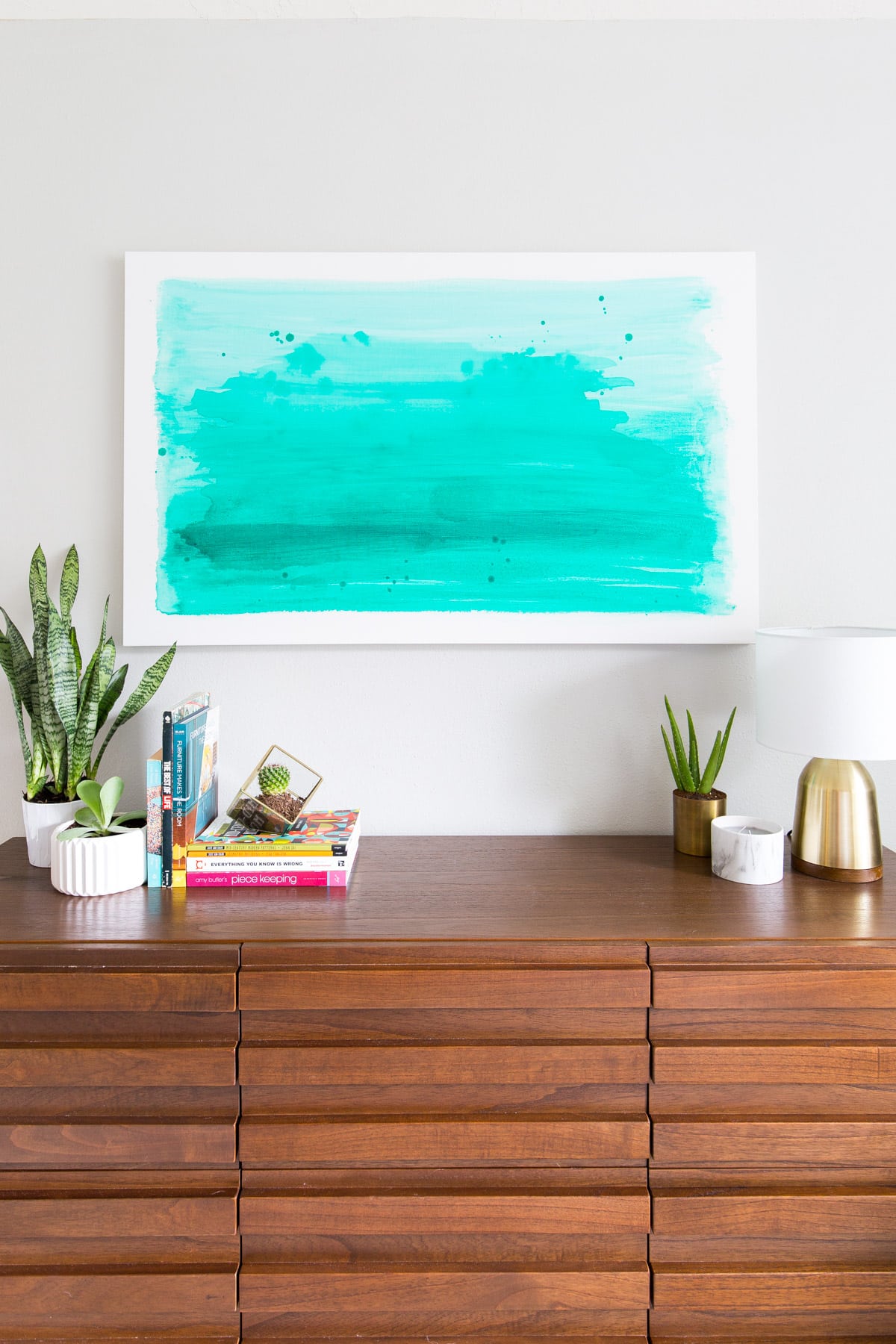 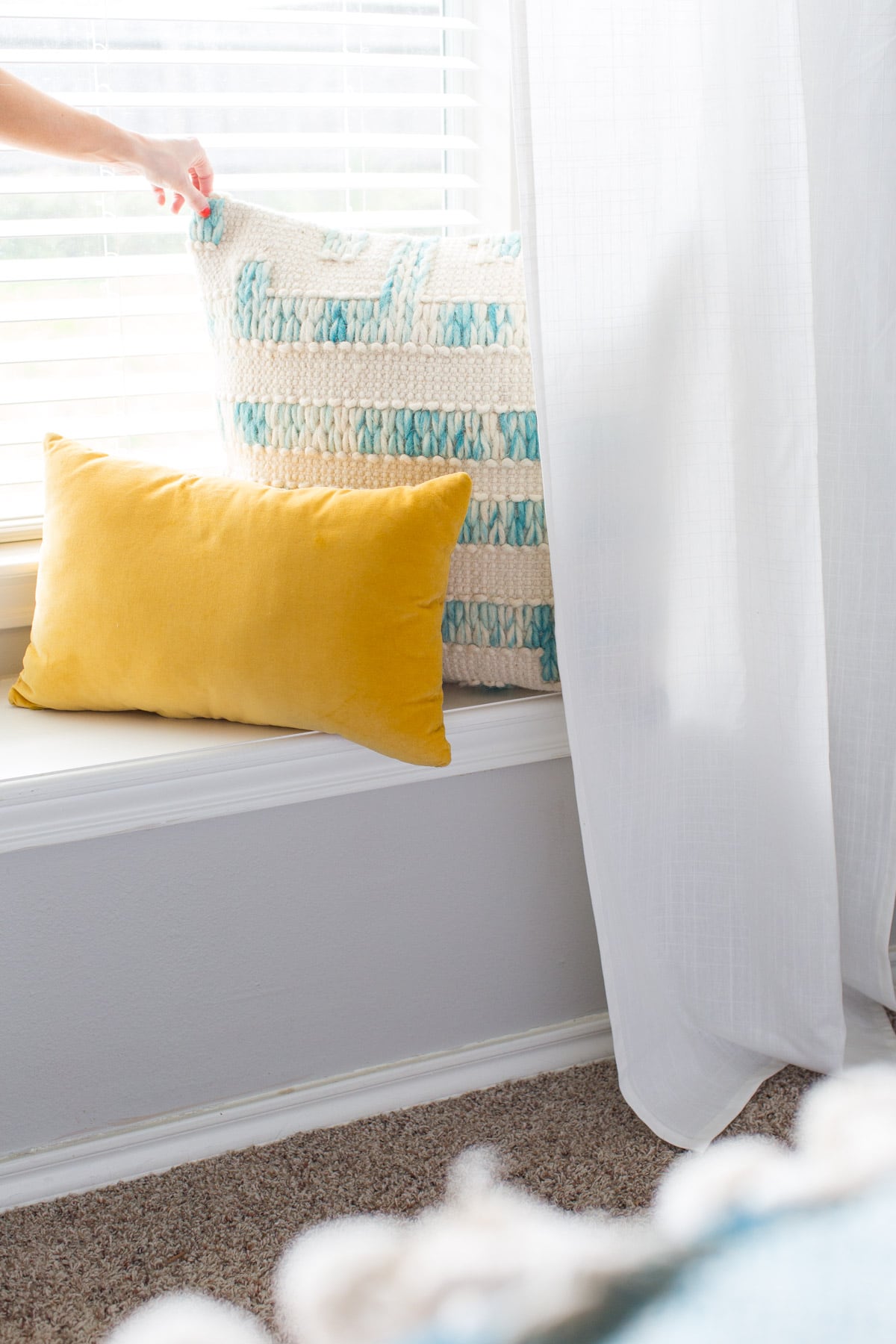 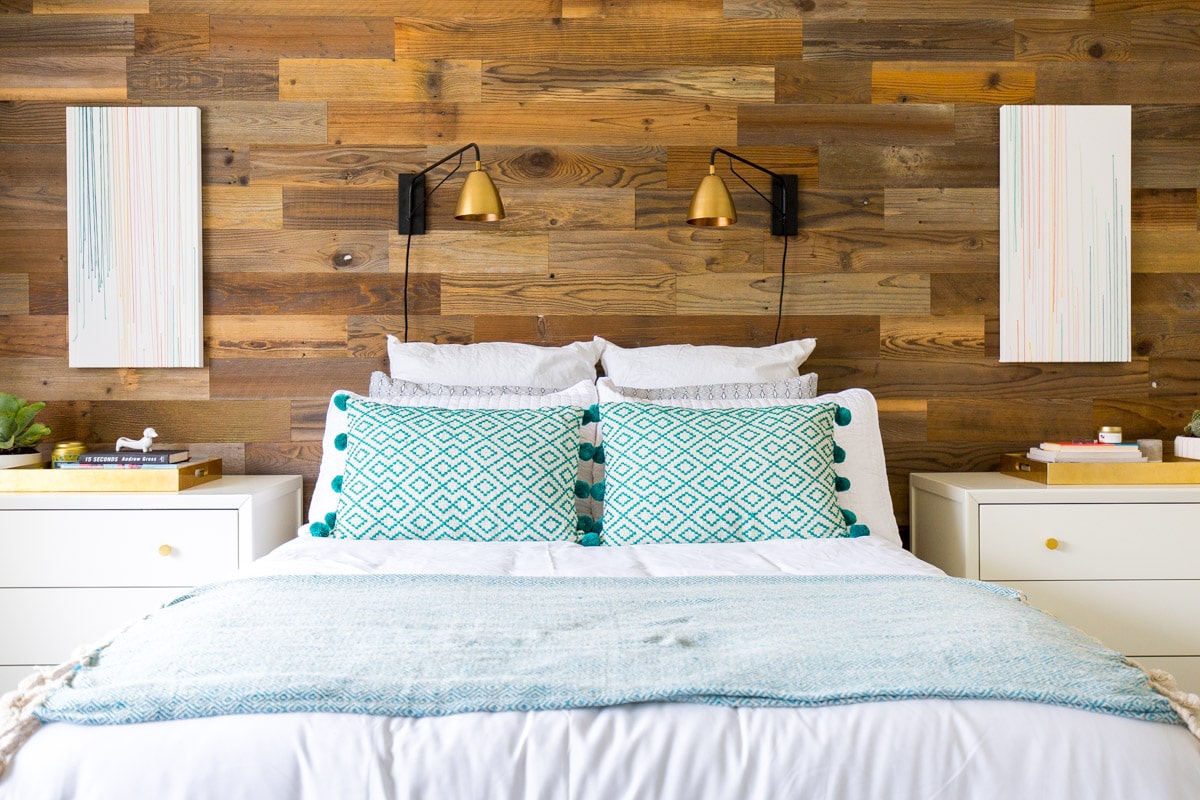 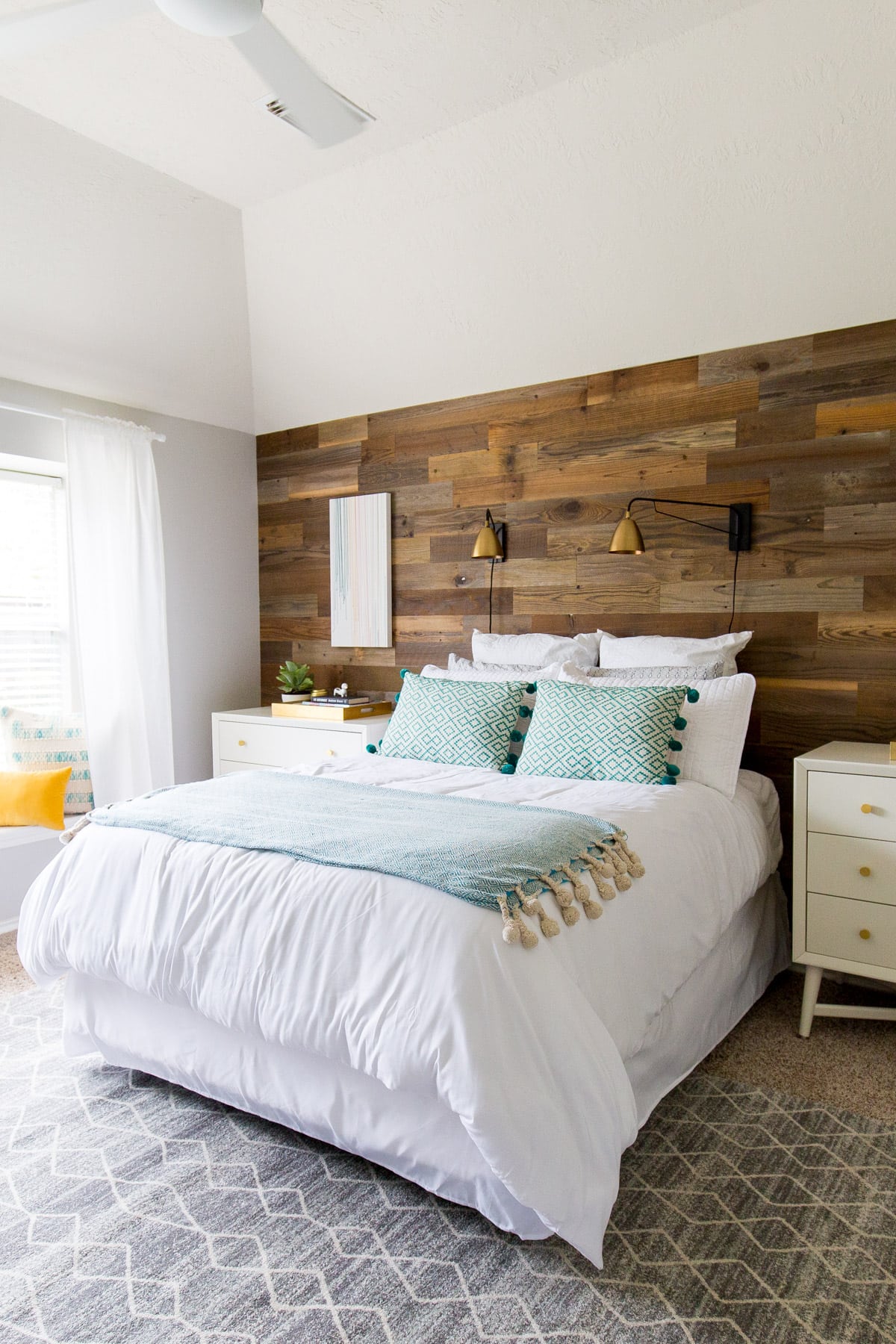 Also not pictured are the pretty hilarious candid photos we took in the midst of trying to sneak their fur child, Frank into a picture.

I figured I should stop at about 20+ photos this time around.

What do you guys think of the before and after simple bedroom makeover?! Things you love, don’t love?

It was awesome getting to gift this room facelift to them. And I’m excited to share a few more we have coming up in the next few months.

We may or may not even be giving a room makeover away, wink wink!