Would you all be interested in me sharing the full rundown of my postpartum experience? I still need to write Gwen’s birth story, but to give you a quick summary, it involved A LOT of stitches. I for sure underestimated the postpartum recovery process, let me just tell you.

So for those of you that might be in the same boat, I put together a concise list of my favorite postpartum necessities… 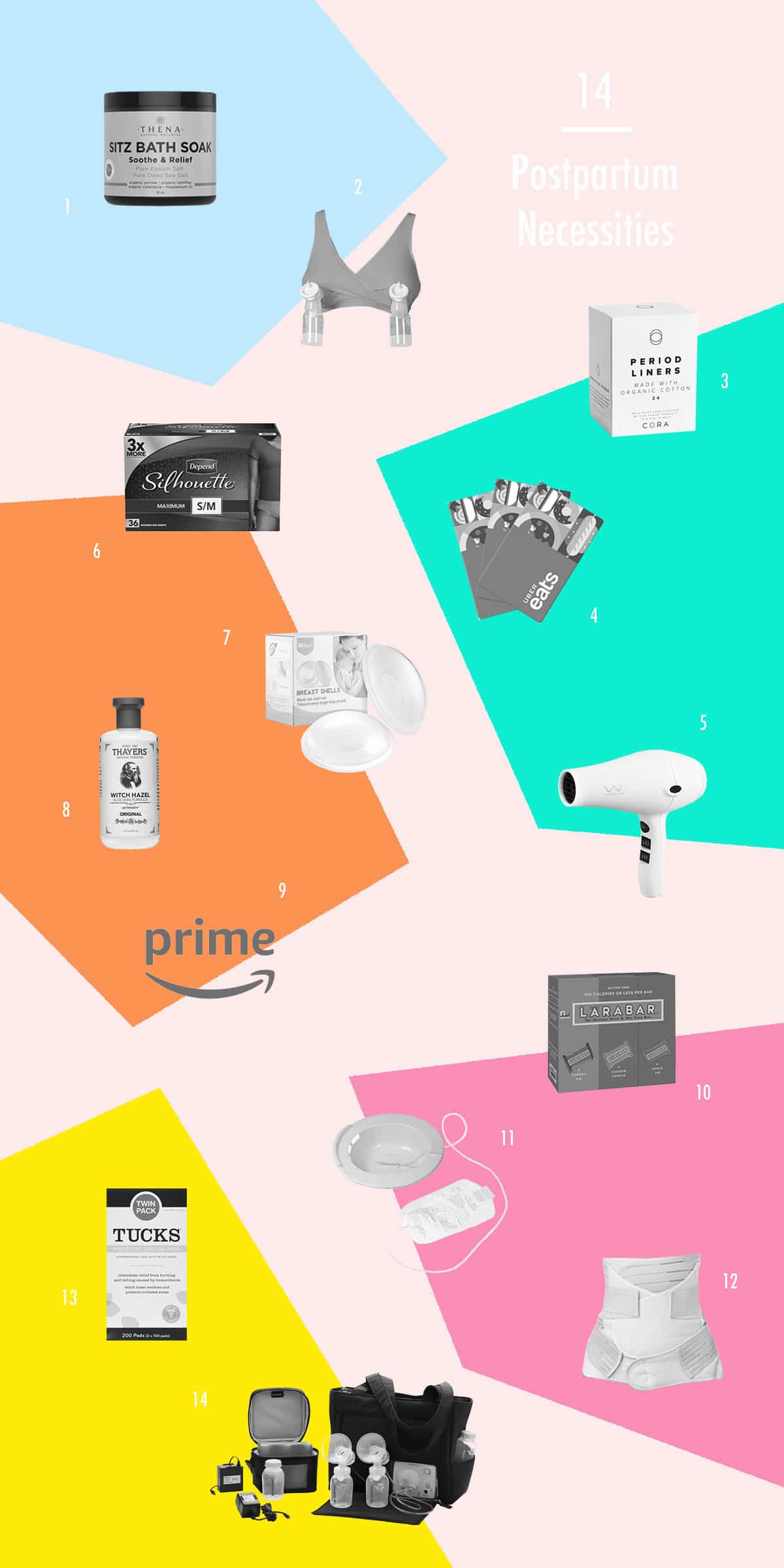 Not shown in the graphic, but equally important: loose black pajamas for fitting your diaper into and hiding any leakage, compression socks so you can see your feet again sooner than later, and stealing the peri-bottle and as many crackable ice pads as possible before leaving the hospital.

And if you’re really particular about cleanliness like me, you might also want a waterproof mattress liner if you don’t already have one. Between your milk coming in, baby spit up, overflowing diapers, bottles, and bleeding, it’s nice to protect your mattress. Plus you don’t have to worry about your water breaking in the middle of the night and ruining it either. Double win!

1. sitz bath soak:  I totally underestimated this one until I realized what a botch job I was down there, then I took it seriously!

2. nursing and pumping bra: if you’re planning to just breastfeed, this isn’t a necessity for you, but because I pumped a lot from the get to, being hands-free was a must! Be sure to size down if you’re using it as a pumping bra so that he can easily hold the weight of the pumps. I also really liked this one.

3. panty liners: after the heavy bleeding stopped, I still wore panty liners for the weird surprises that hang with you for several weeks after. Mine stopped, started, then stopped again a few times before I was fully healed!

4. Uber Eats: this is pretty self-explanatory, but just expect to not go anywhere for a while if you had half as many stitches as I did! We ordered food SO MANY TIMES.

5. blow dryer: this one seems weird, but in case you’re prone to yeast infections, you’ll be glad you have this on hand! Every time I used the peri-bottle when I got home, I would blow dry down there to avoid getting any yeast infections from all of the moisture. The last thing you need is an extra itch on top of being sore!

6. depends: I gave up on the massive pads and just went straight for the adult diapers after several friends recommended that route. I really like the fit of these…as weird as that is to say about diapers haha!

7. breast shells: if you are breastfeeding and still want to be able to get a slow stockpile of frozen milk going, you can use these inside your nursing bra on the opposite breast that you’re feeding with to catch your let down so store small amounts of milk at a time without doing any extra work.

8. witch hazel: I used this with a few drops of pure tea tree oil in a peri-bottle for WEEKS

9. Amazon Prime membership: trust me, you’ll just sit on your phone scrambling for the right size diapers, something you forgot, cleaning supplies, toilet paper because you haven’t left the house…you name it. Plus having Prime Now is a BEAUTIFUL thing. It’s a must in my book.

10. Larabars: we were gifted so many Larabars during postpartum which I thought was weird at first, but then I understood once I was rooting around half asleep at 2am feeling like a bear coming out of hibernation.

11. sitz bath: referencing the sitz soak above, this was WAY easier to manage than trying to get in the tub for me. Again, I could barely walk so getting in and out of the tub was a definite no. This just sits over the toilet like a hanging mini tub, so much easier.

12. belly band: I started using this about a week after birth (once the swelling was down enough to where it would even go around me!) and if nothing else, it made me feel a lot better about myself but it supposedly helps with restrengthening your muscles, etc.

13. Tuck’s pads: I used these in my purse the few times that we did go out in public (i.e.: doctor appts) and had to use the bathroom but obviously didn’t have a peri-bottle with me. Plus they’re nice to line your pads with for cooling/soothing effect at home.

14. breast pump: I used a classic Medela pump RELIGIOUSLY at first, but have since started using my wearable Willow breast pump 90% of the time, and the Medela only in the morning or to save on Willow pump bags when I know I won’t be doing a full pumping session.

Featured photo by The Cotton Collective from our newborn session with Gwen!