Hopefully no one is suffering from vision impairment from that feature before photo. The original kitchen in our renovation house was just…A LOT (you can see all of the before photos here). Our new kitchen design plan will be much more minimal in comparison, to say the least!

The one thing I hated about the before kitchen was the weird drop down for the ductwork. It made the space feel so small and sectioned off. I also didn’t love the fact that you had to step up into the kitchen, but we did really love the original terrazzo flooring and wanted to try to keep it if it all possible.

If you’ve ever renovated then you know first hand that your wish list doesn’t always add up to your budget. We worked with Genesis CP to figure out what was doable. Getting rid of the drop down came with a hefty structural beam price tag, but it’s worth it in my book!

Once they started to demo the existing cabinets we quickly realized that it was going to be tricky to save the terrazzo since it was in really poor condition (if it existed at all!) underneath some of the cabinets and wall divisions. After A LOT of debate, the most budget-friendly option for flooring was to lay the Stuga Studio wood we were using throughout the rest of the house on top of the newly patched, crumbling terrazzo.

The reason we wanted to save our budget with the flooring was so that we could spend more to rework the overall layout. You can get a better idea of the floor plan changes to the kitchen from my floorplans post right here. 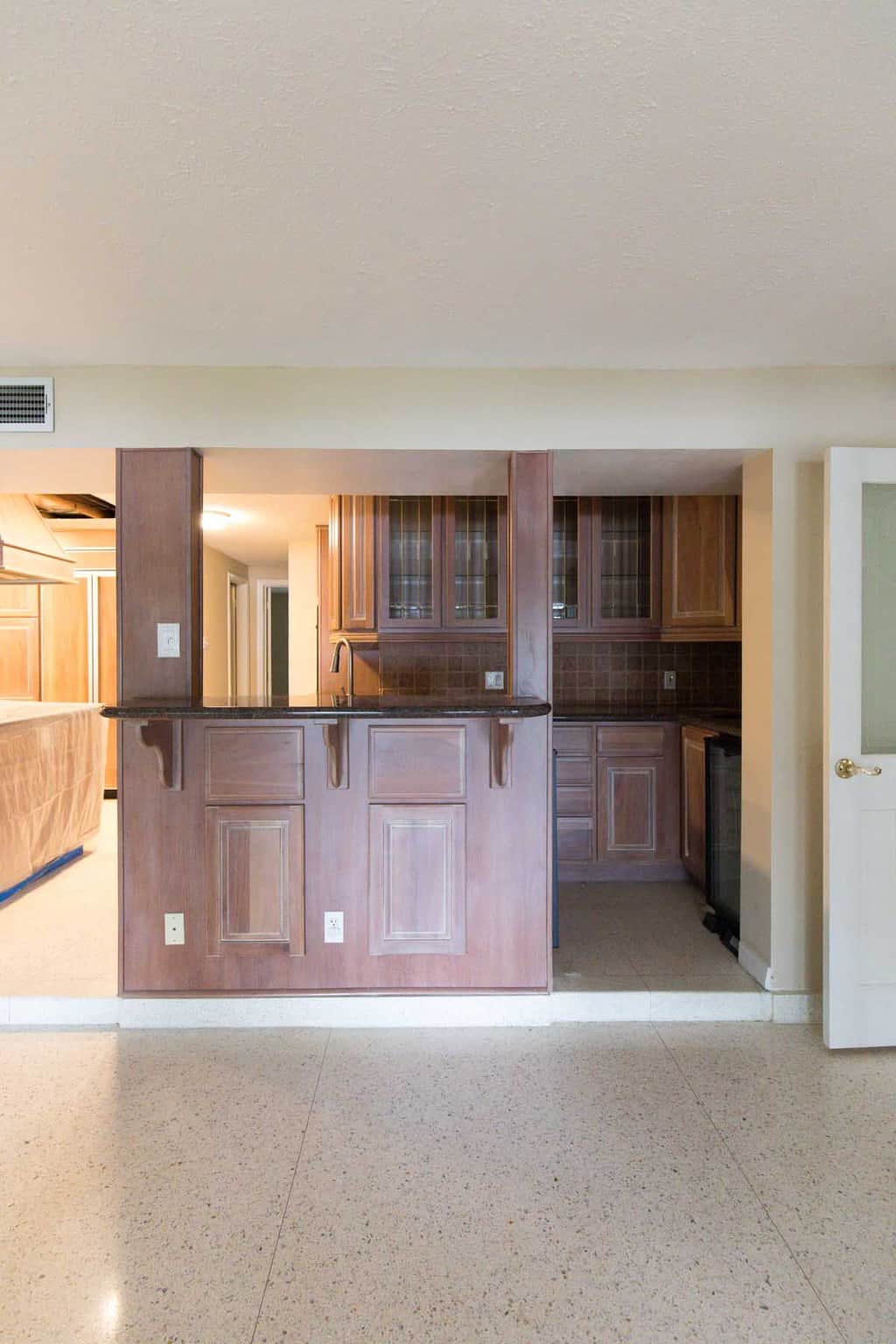 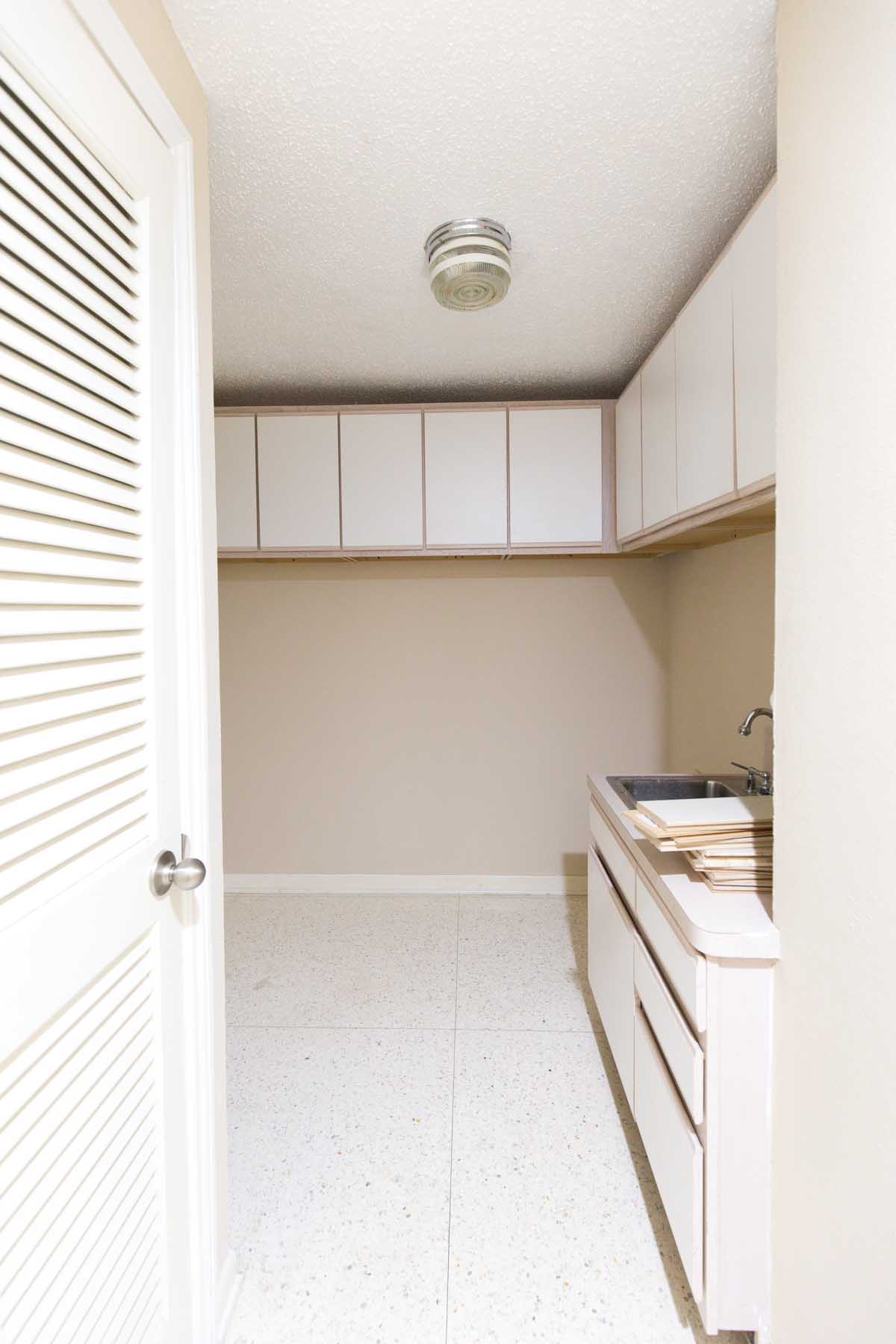 The old laundry room (above) is now the walkthrough pantry from the garage entrance with a spot for keys, mail, etc. It made the space much more versatile for us and a better flow getting into the house from the garage as well. 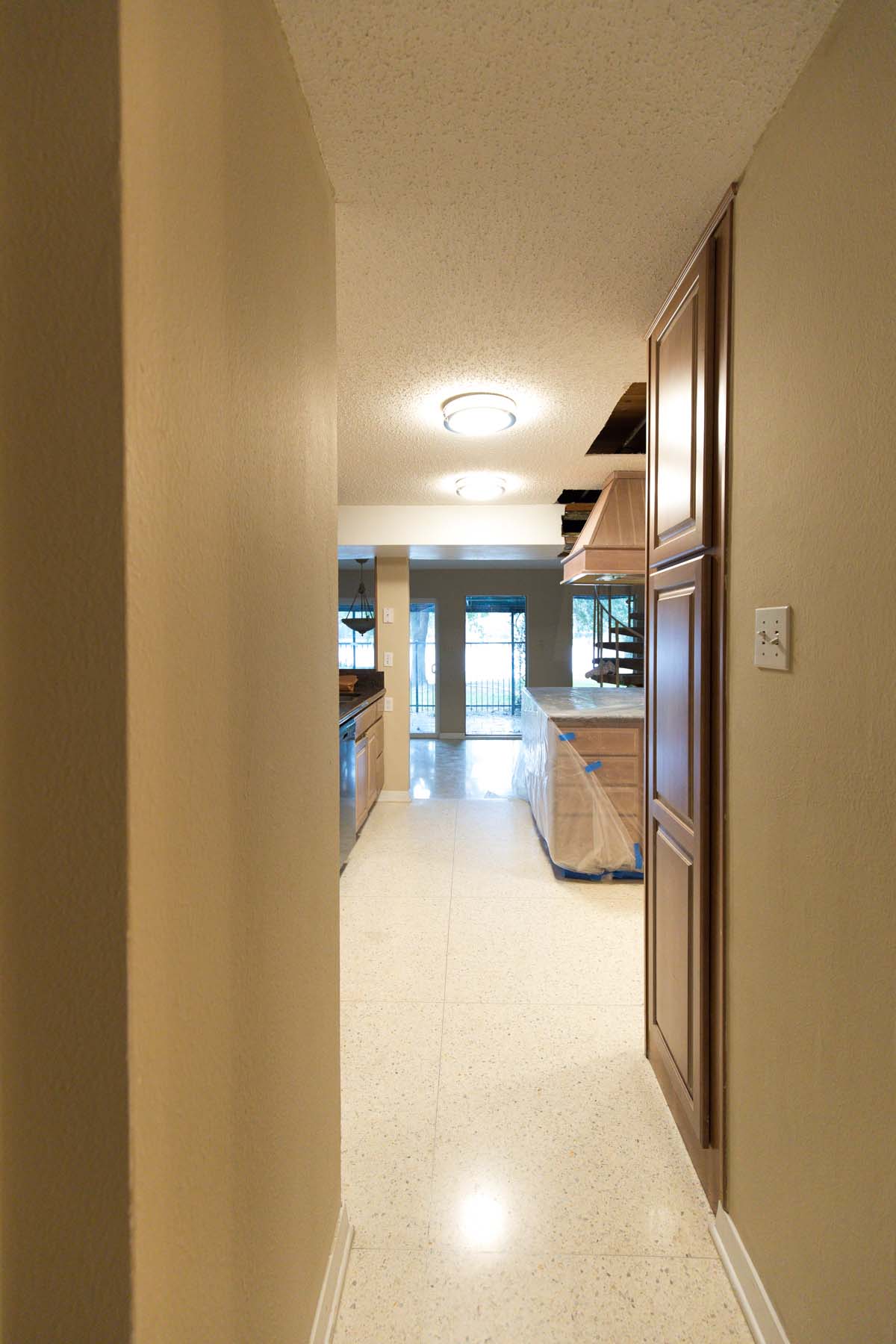 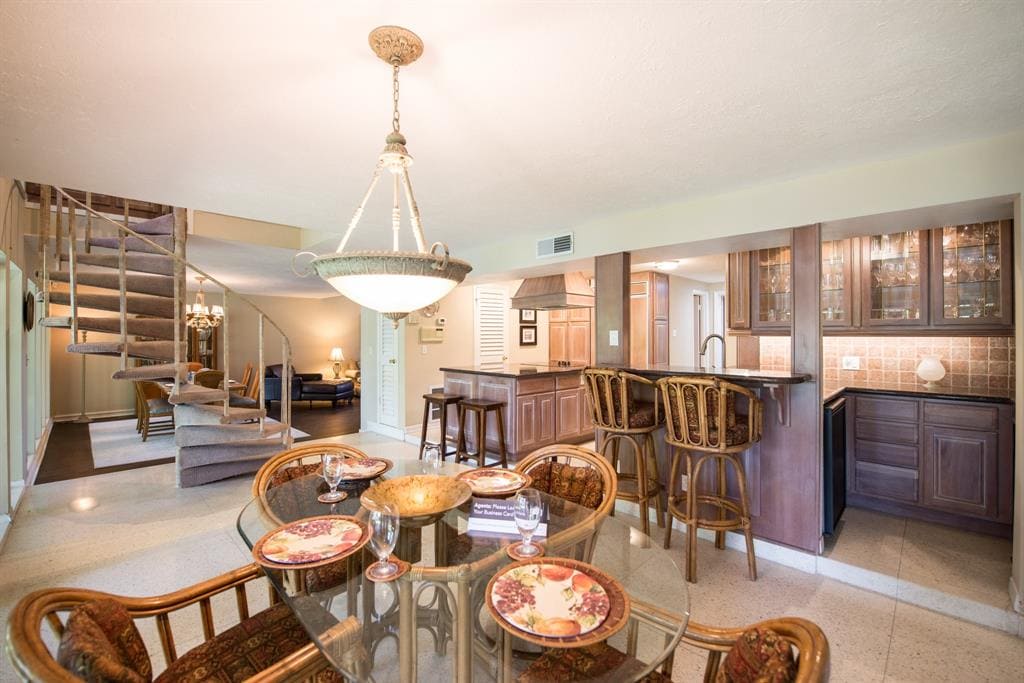 As far as cabinetry, we’ve always wanted to try out the Semihandmade cabinet fronts. They make sleek, high-end cabinet doors that fit Ikea cabinets. Though the Semihandmade fronts are very user-friendly, plus they offer white glove delivery and consultations for choosing your pieces, the Ikea kitchen planner isn’t quite as easy.

From our experience, you should 100% use all of the Ikea kitchen designer and planner services rather than doing it yourself. We made that mistake once, and it won’t happen again haha!

Basically, don’t plan to virtually build, measure for, and install the base of your kitchen yourself unless you’re VERY DIY savvy and/or have a strong marital relationship. Haha! Pretty sure Jared and I almost killed each other several times.

Overall I’m so happy with upscale it looks (reveal coming soon!) using the Chris Loves Julia x Semihandmade shaker style cabinet fronts, but it’s worth it to handoff the installation specifics when it comes to the Ikea details. 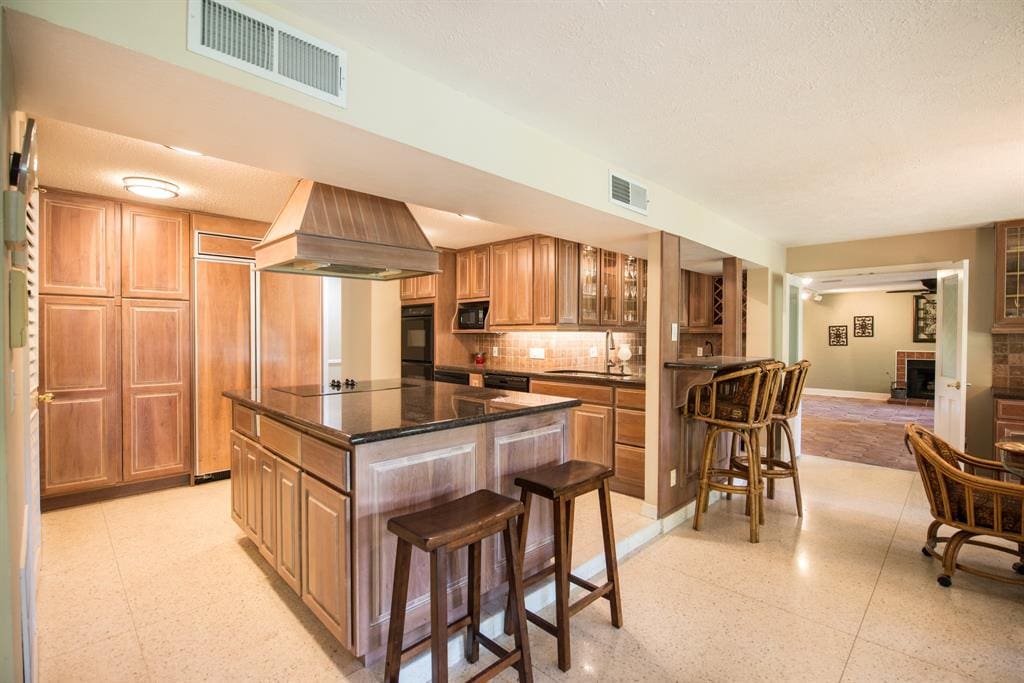 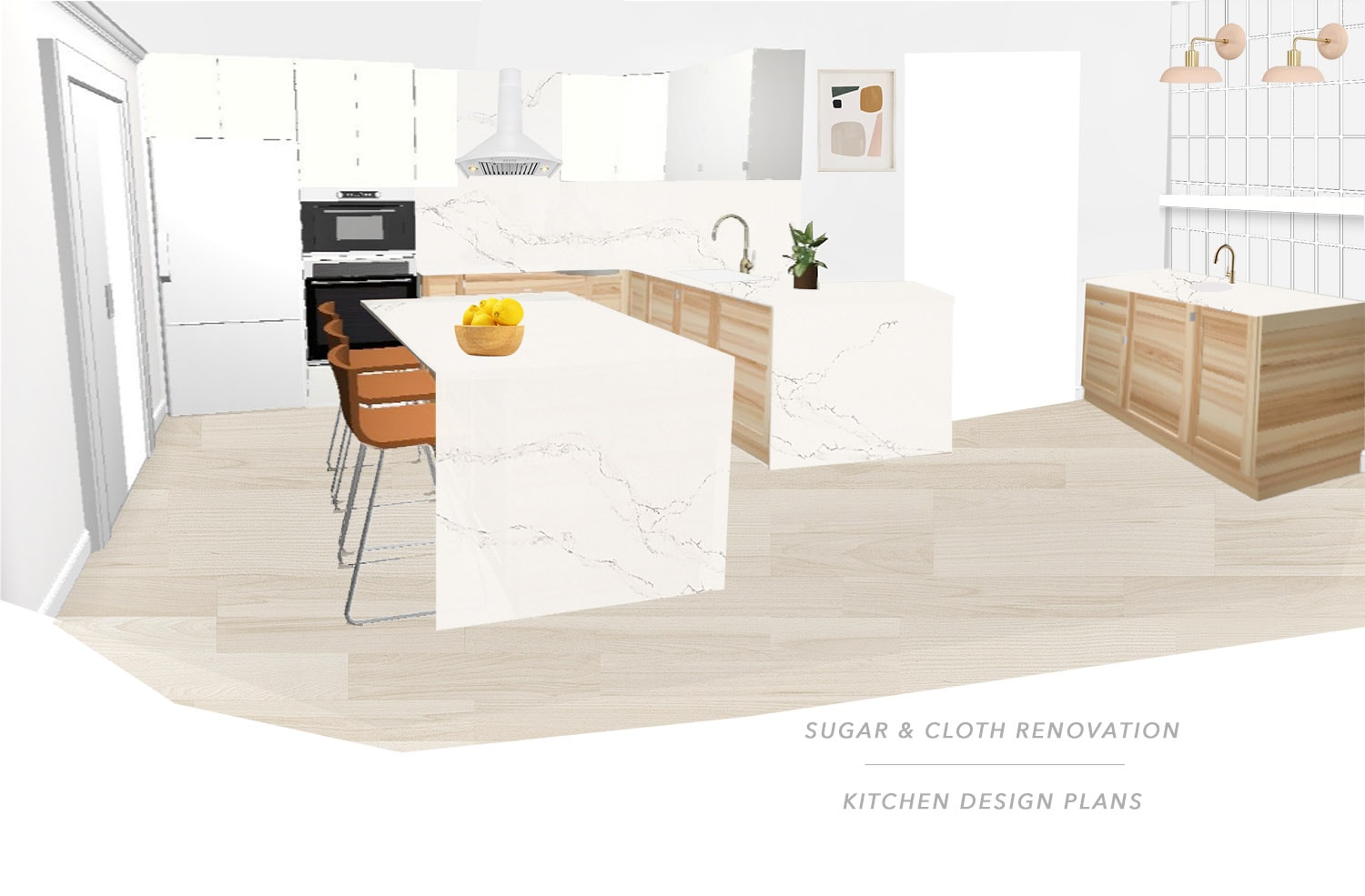 For countertops, we were originally loving Caesarstone Frozen Terra to mimic the terrazzo floors that we had to cover up, but once we saw the samples in real life it looked a lot darker in the space. There aren’t any windows in the kitchen, so we ended up choosing Calcutta Nuvo for a brighter feel.

Originally we only planned to have an infinity edge on the island, but thanks to having to create a weird adjoining wall for plumbing near the kitchen sink, we opted for doing a second infinity edge countertop there instead of a custom cabinet piece.

We still kept part of the wet bar feel with a floating shelf accent wall on the right of the kitchen, and I’m super excited about styling this space!

You can get an idea of all of the pieces we used for the kitchen in the links below, and I’ll be sharing the final kitchen reveal here in the next two weeks! Yay!