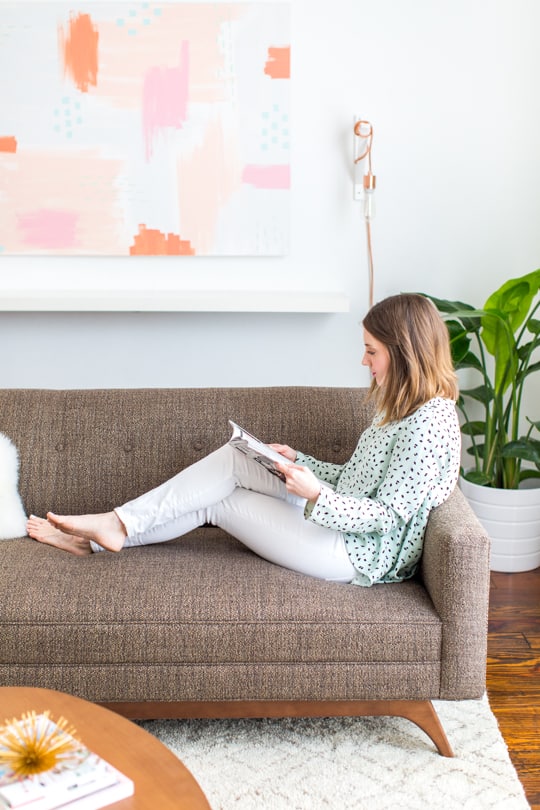 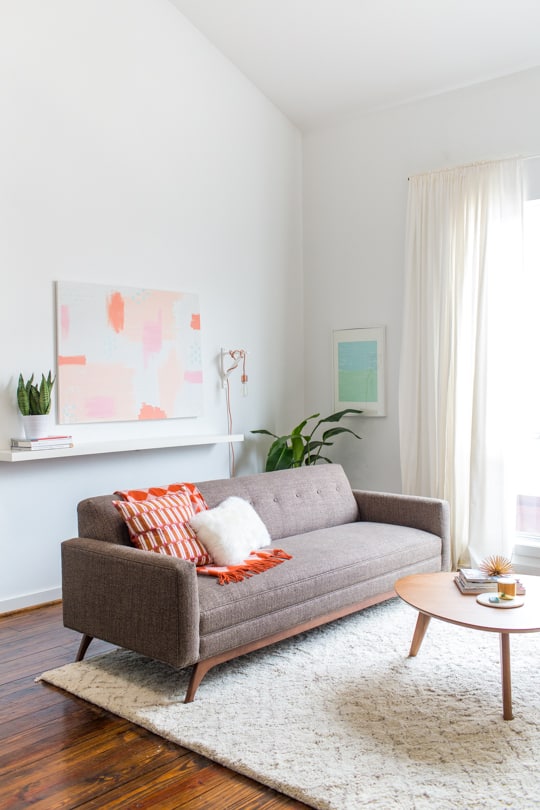 If any of you remember my old home tour and living room reveal, then you know it’s been a while since it’s had some updating! It was looooong overdue for something a little more sophisticated and gender neutral, but I think I’ve accomplished just that with my living room makeover and some key pieces from Arhaus! It’s funny how just changing the sofa, rug, and accent chairs makes a huge difference even with the same general layout, wall color, and style, isn’t it?

I also feel pretty adult considering this is the first time I’ve owned what I like to call “long lasting” furniture that’s worth investing in, as opposed to things I’ve picked up really quickly just to fill the space. Don’t get me wrong, I still have lots of not-so-great budget furniture, and I still love my DIY accent pieces (there are still plenty in this room, can you spot them?!), but I’m now a firm believer that investing in the big stuff is worth every penny. The fact that my previous couch was (literally) propped up on stacked books because the legs weren’t sturdy is a great example of this, ha!

Now for the before and after details!… 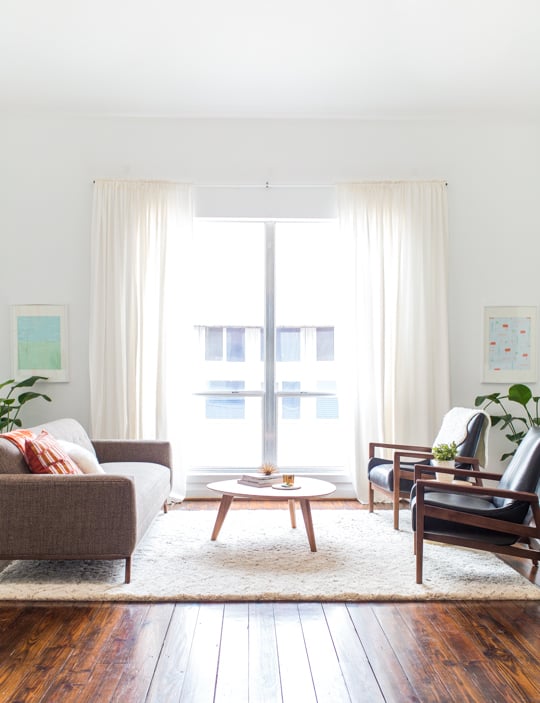 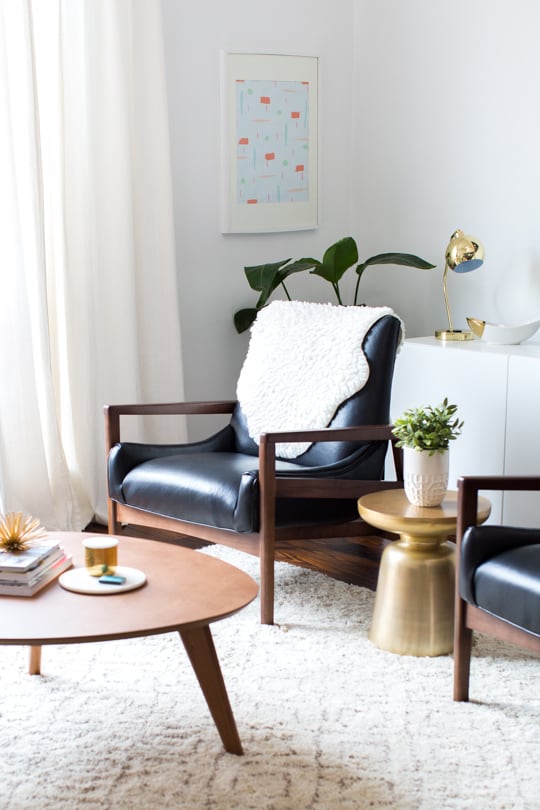 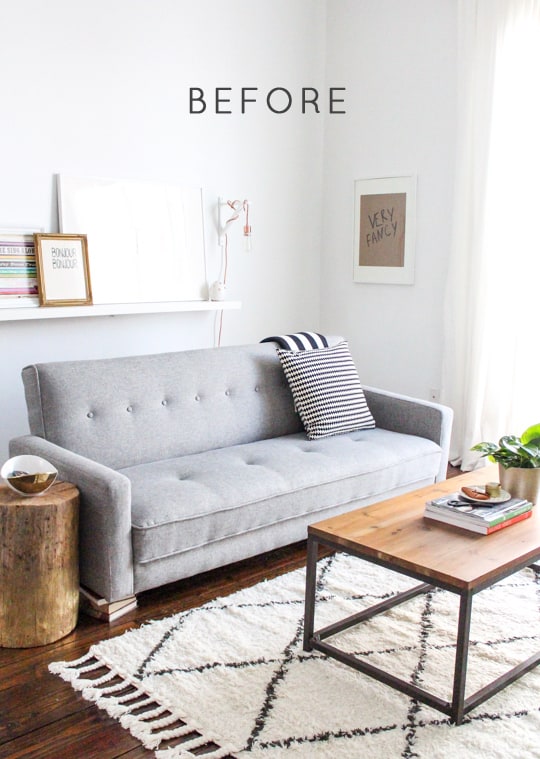 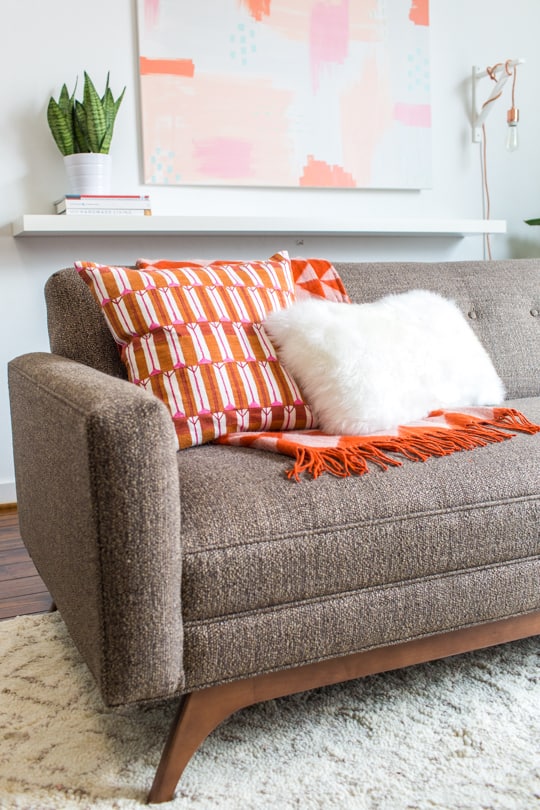 I replaced the old, grey sofa with legs that were falling off with this Brekan upholstered sofa in Tribeca Pewter, which is approximately one million times sturdier and better built. It’s also a lot wider and comfier to sit on when it comes to lazy days around the house.

We paired it with two Kerouac leather chairs in black, and at first I was a little concerned that it went from too feminine to super dark and masculine with the wood floors, but the Marciano grey rug lightened everything up.

This rug is also a lot like walking on a cloud, and I’m not even kidding you. It’s super thick and fluffy which was a nice change of pace from my previous rug that was basically a step up from being textured paper. 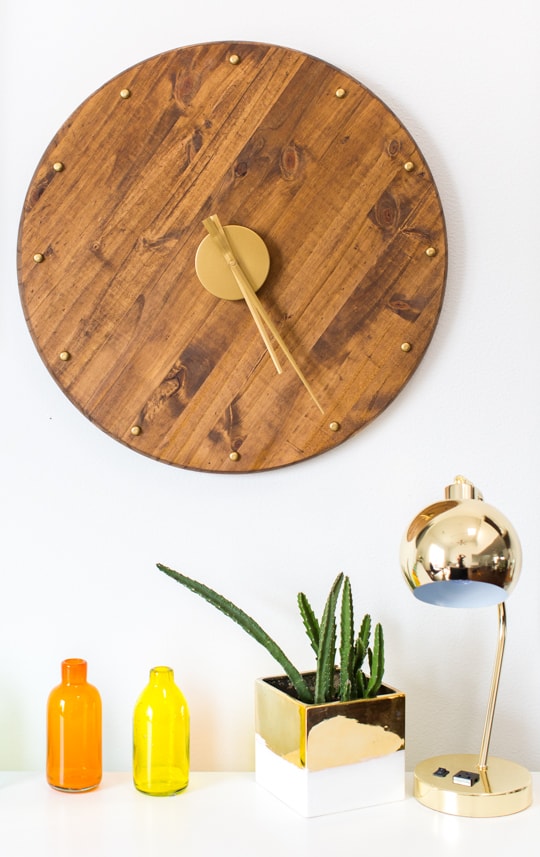 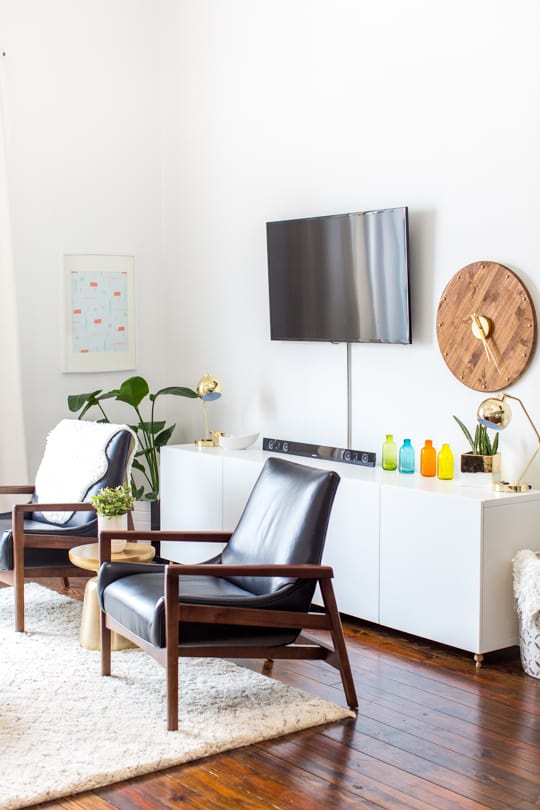 I used to have the bookshelves open and exposed, but the duty of dusting them was just never going to be my strong suit, so we put white doors on the fronts, and streamlined the TV necessities on top.

I’m also clearly still in love with this DIY mid century clock since I have used it EVERYWHERE. I’m not ashamed, though, the heart wants what it wants, you know?! 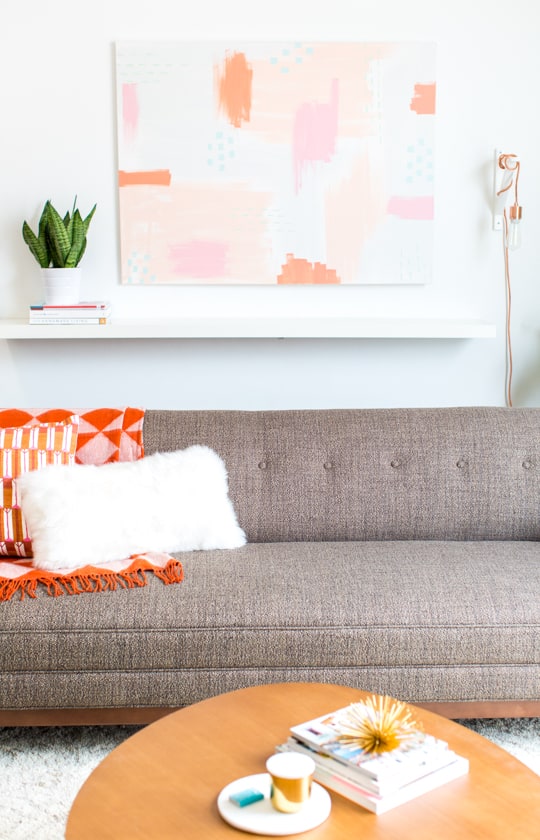 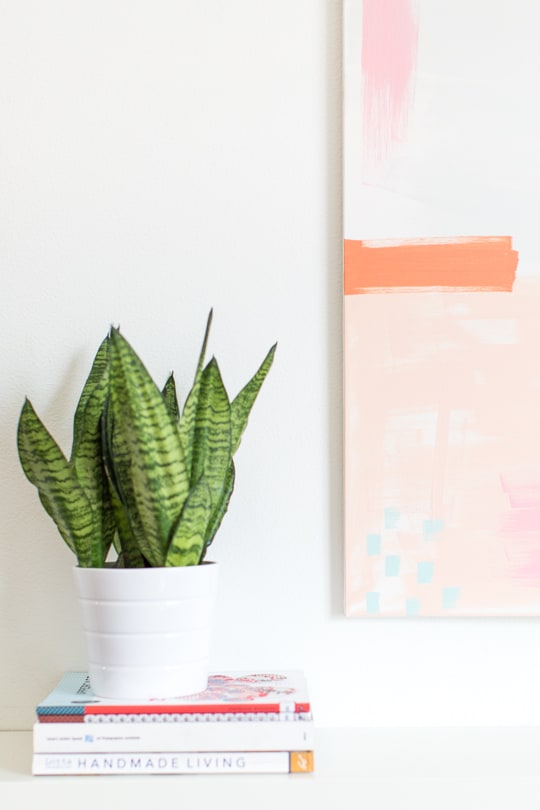 I didn’t want to break the bank on artwork, so I actually just bought a large canvas from the craft store and painted it myself, along with the two horizontal pieces on either side of the window. I’m not totally decided on the two smaller ones yet, but the room definitely needed some color to feel like “me”, and they definitely do the job when it comes to that. 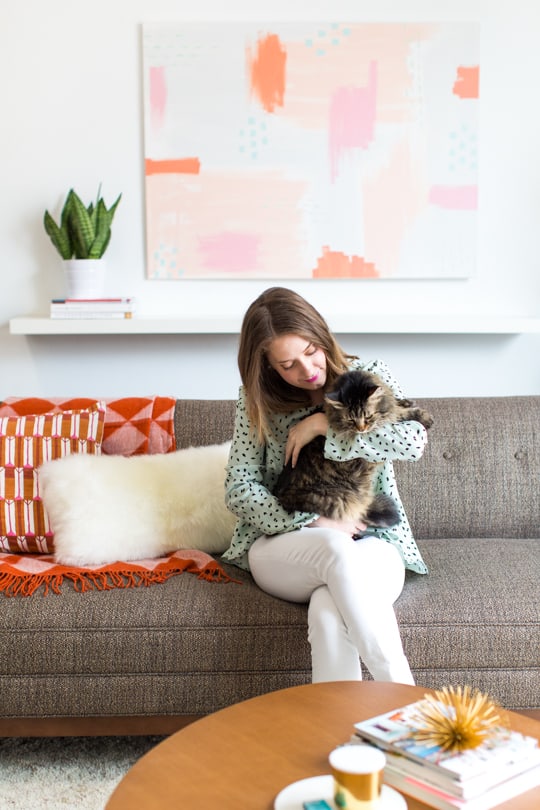 Of course Thomas had to make his appearance, ha! If you only knew how many photos we really had to shew him out of. Between the fur pillow and Arhaus rug, he basically lives in this space! 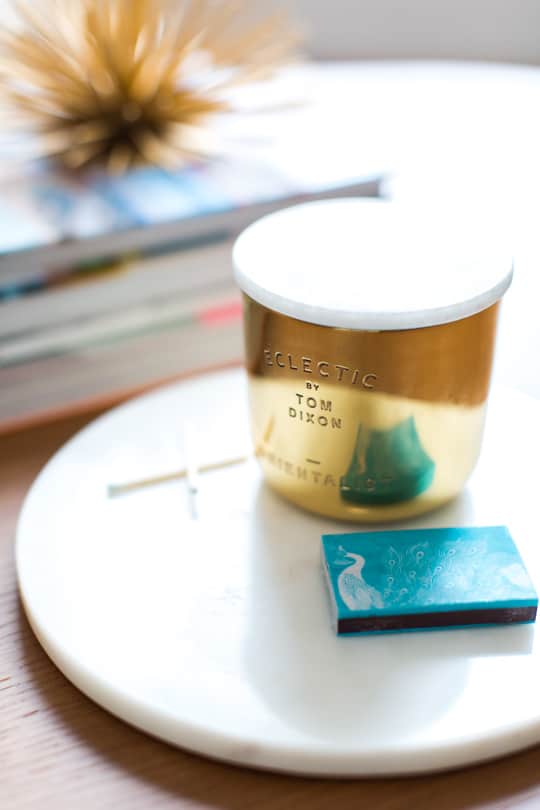 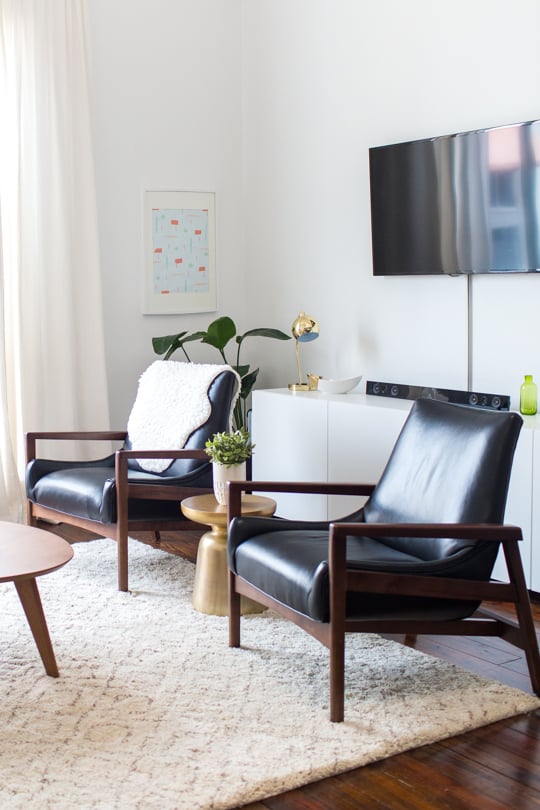 Now if only we could 100% cure the ugliness that is living room technology. Until then, I’m feeling pretty good about the Arhaus cuteness outshining the rest!

What do you all think of this space? Am I crazy for wanting to change things up after just two years, or do you all switch things up often? I think now that I have quality furniture pieces I’ll just stick with switching out accessories when I have the itch for something new.

This post is made possible by Arhaus. Thank you for supporting the brands that keep bigger and better DIY’s and even sweeter sweets coming straight to your inbox!

25 thoughts on “Before + After: My Living Room Makeover”