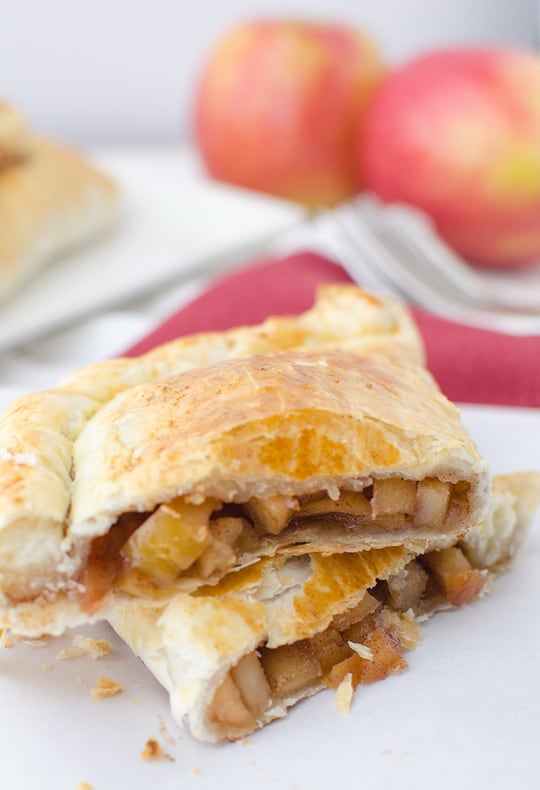 I, Alex am of the firm belief that summertime eating is all about the hand-held food. Burgers, popsicles, corn on the cob and of course, a token apple pie hand pies recipe.

If I can eat it without needing a plate and a fork, I’m sold!

This hand pies recipe is infinitely tastier than the iconic fast-food version. But just as adorable.

The beauty of apple hand pies is that even novice bakers can feel like kitchen superstars. Because it’s almost impossible to mess these up, don’t be intimidated by the amount of steps, the entire process is really intuitive.

Cook the apple, swirl in a few spices, and taste. 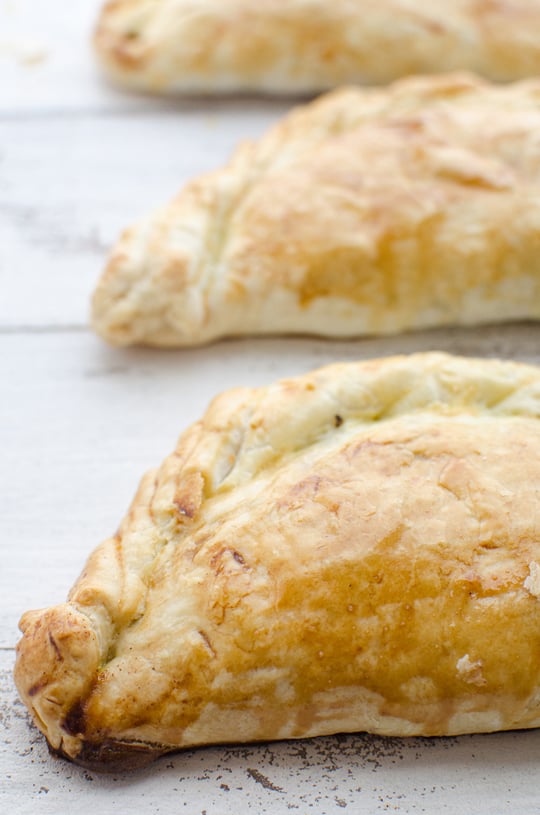 Feeling frisky? Add a splash of whiskey or bourbon to the batter.

Or if you want more warmth, add in more ground ginger or cinnamon.

While most baking recipes need to be followed to the T, apple pie filling is much more forgiving. So summon your inner Nigella Lawson and let your taste buds be your guide! 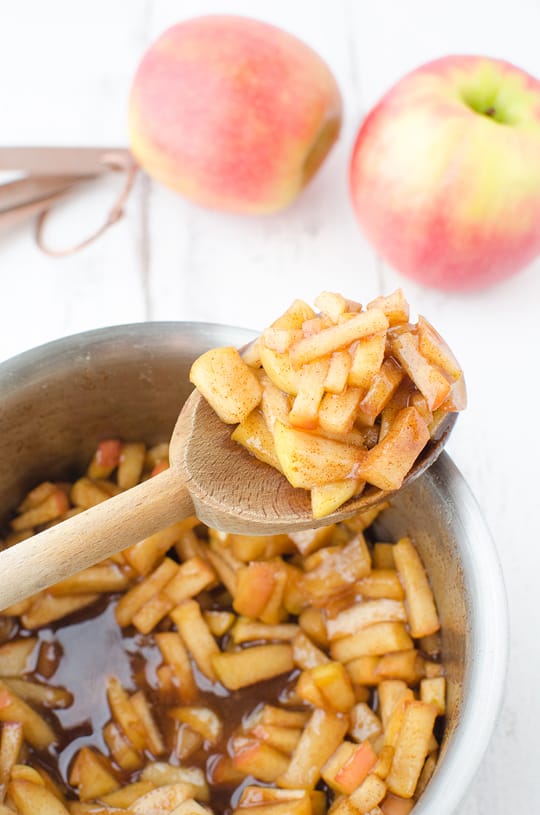 Since we’re going for a rustic look with these pies, don’t worry too much on how the final product looks.

You can make these pies mini for a 2 bite dessert or a little on the larger side like I did here for a heartier evening treat.

I included my tried and true pie crust recipe below. But if you’re wanting these in a hurry, feel free to opt for store-bought crust.

Either way, make sure to take the time and add the egg wash at the end. It’s the key to getting that golden brown crust that just begs to be eaten. 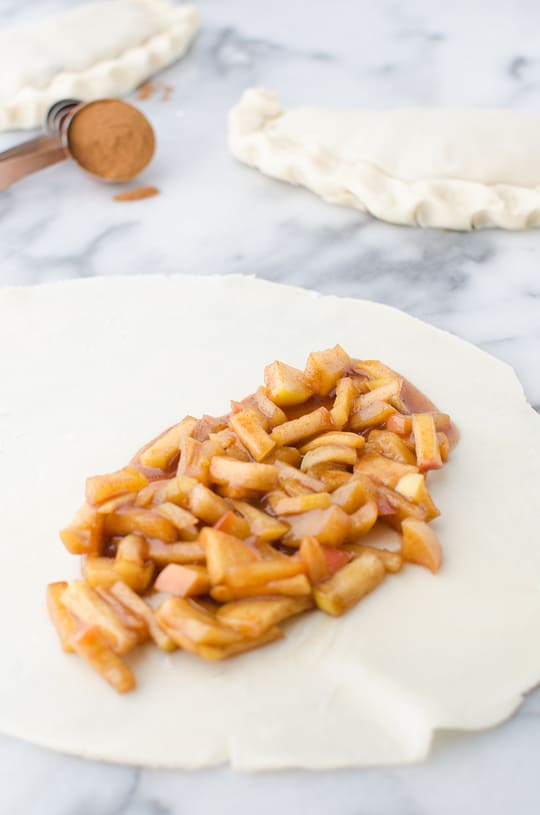 Ingredients Needed To The Apple Filling 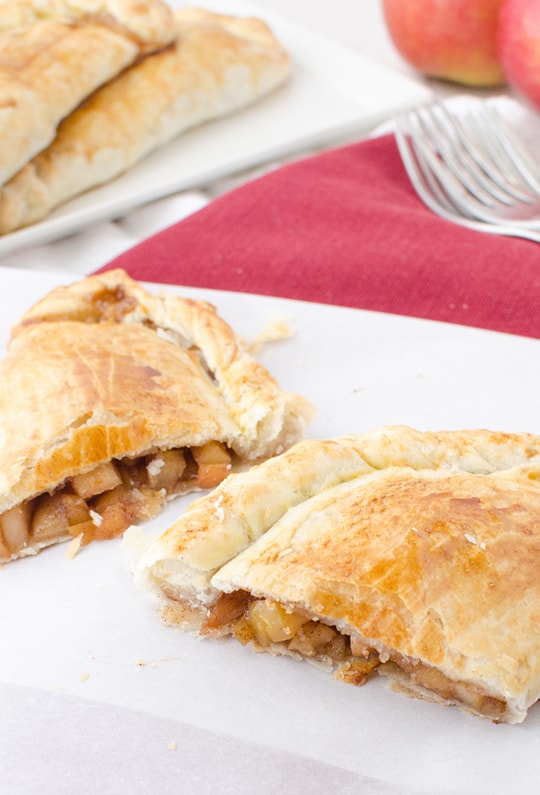 How To Make Apple Pie Filling

In a large bowl, combine flour and salt.

Cut in the butter using a pastry cutter until mixture resembles coarse crumbs, like wet sand.

Stir in water, a tablespoon at a time, until mixture forms a ball.

Wrap in plastic and place in the refrigerator while you make the filling.

Place butter in a large skillet and melt over medium heat.

Cook until butter begins to turn a golden brown color, about 1 minute.

Add apples, sugars, and a pinch of salt. Cook, stirring often until apples are soft, about 5-7 minutes.

Add in spices and cook another 2-3 minutes.

Remove from heat and let cool. 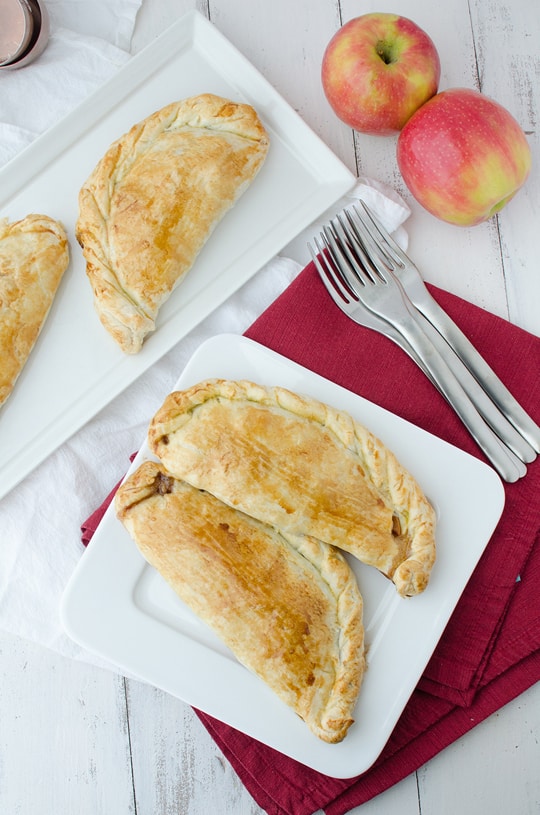 Now It’s time to make the pies! You have a few options on how to do this. You can roll the pie dough out and then cut circles using a biscuit cutter or large glass.

This method will create even, miniature pies. Add a tbsp. of the filling to the circle, fold in half and crimp with a fork to close.

For a more rustic look, roll the dough out and free cut into circles using a knife.

Spoon filling into the center, fold in half and crimp to close. Depending on how large your circle is will determine how much filling to add.

To make the edge as pictured here fold the overhanging bottom part of the dough up over the top edge, working your way around the crust.

Crimp the edge tightly closed, pinching a little bit of dough with the thumb and forefinger of one hand and using your index finger on the other hand to push a small notch into the pinched dough.

Continue for the rest of the crust.

Whisk egg in a small bowl and brush top of each pie with egg wash.

Cut 3 small vent holes in the top of each pie.

Bake for 25-30 minutes until golden brown. 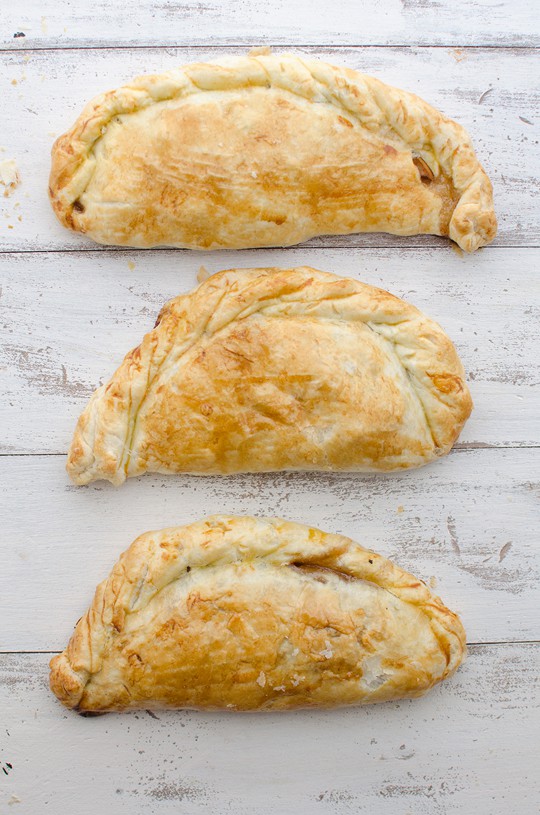 Once you’ve tried the apple version, give this recipe another go with blackberries, cherries and/or blueberries.

Whatever combination you choose, make sure to make enough to share with friends!