Fake Pregnant Belly — My husband wore an empathy belly to get a small taste of the pains of pregnancy. It was an interesting day… 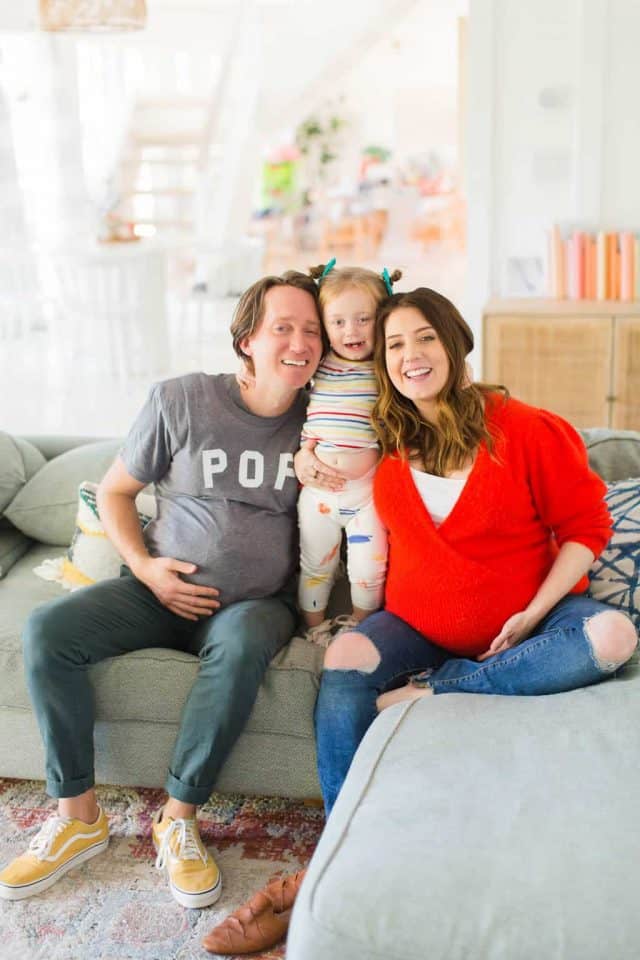 You receive it deflated and fill it with water and weighted spheres to mimic “fetal movement”. Overall, it simulates an added 30 pounds of weight and some extra sloshing around for theatrical effect.

For the record, I gained 40-lbs with both of our daughters, and I was 35 weeks pregnant when we filmed this video. That was after experiencing category five level nausea and needing prescriptions to keep the vomiting at bay for the first 17 weeks.

I won’t even get into the random crying spurts and extreme fatigue that could tranquilize a small elephant.

All of this to say that the symptoms and effects of being pregnant can never truly be recreated for our husbands to experience. At least, a good online rental can give them some idea of the weight gain and mobility problems.

Naturally, we had to film it all, and you can scroll to the bottom of the post to jump straight to the video if you’d like! In the meantime, here were the details… 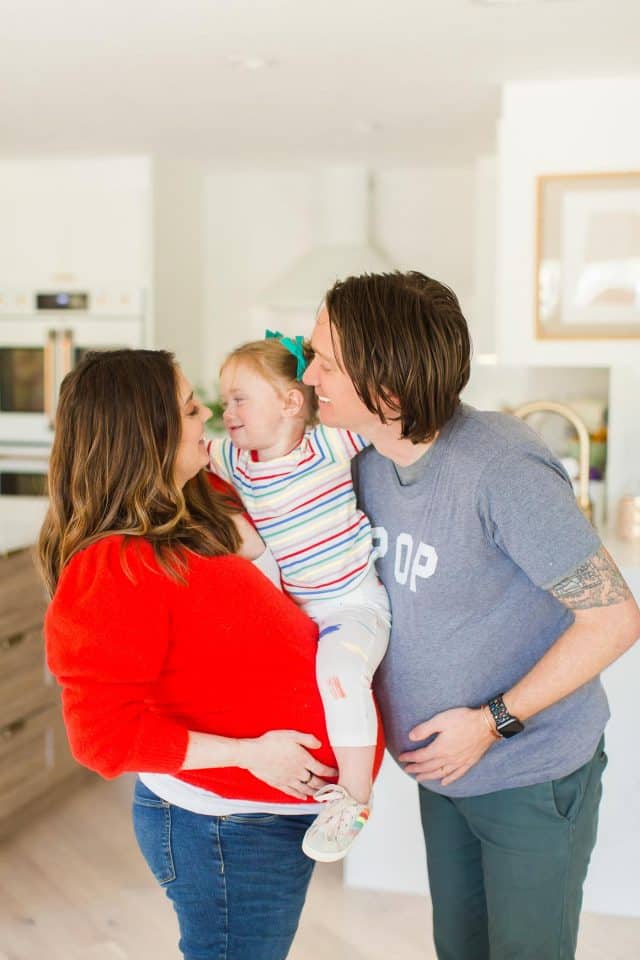 The original deal was that Jared had to wear it from the time he woke up until the next morning for a full 24 hours. Plus, that would give him a little appreciation for trying to get comfortable sleeping at night.

I don’t want to spoil the ending, but let’s just say he didn’t make it quite that far. 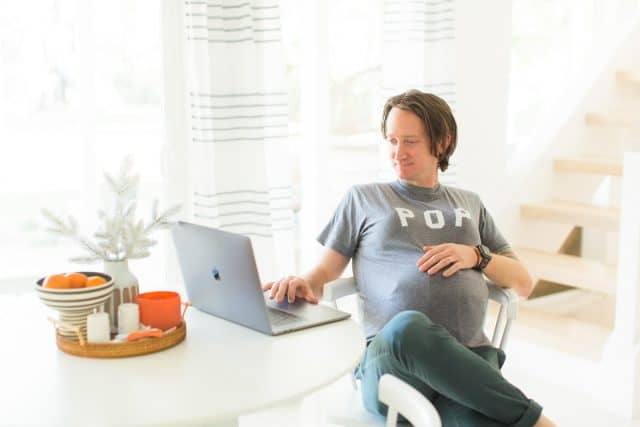 While the video at the bottom of the post does a lot of the talking, I thought it would be fun to ask Jared a few quick questions on both his experience with a pregnant belly AND how he felt dealing with a pregnant wife this time around.

Q: Was wearing a 30lb belly around all-day harder than you thought it would be?

A: “No….(insert me staring at him like he’s a liar, then he proceeds to laugh)…yeah, it was much more annoying to get normal day-to-day things done. Plus, trying to carry a toddler along with it.”

Q: Did it give you more sympathy for your very pregnant wife?

A: “One day of wearing, it wasn’t horrible, but no, I honestly can’t really imagine going months with it.” 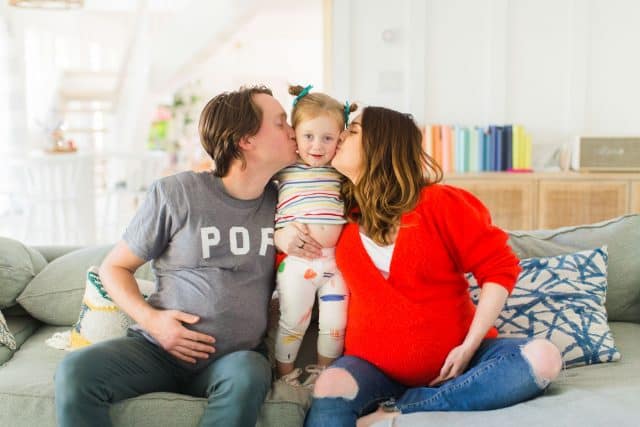 Q: What was the hardest thing you had to do that day?

A: “Anything that required bending down.”

Q: How was it trying to parent with the belly on?

A: “I ran out of energy chasing Gwen around and picking her up a lot quicker.”

Q: Do you think other husbands should have to wear a fake pregnant belly? 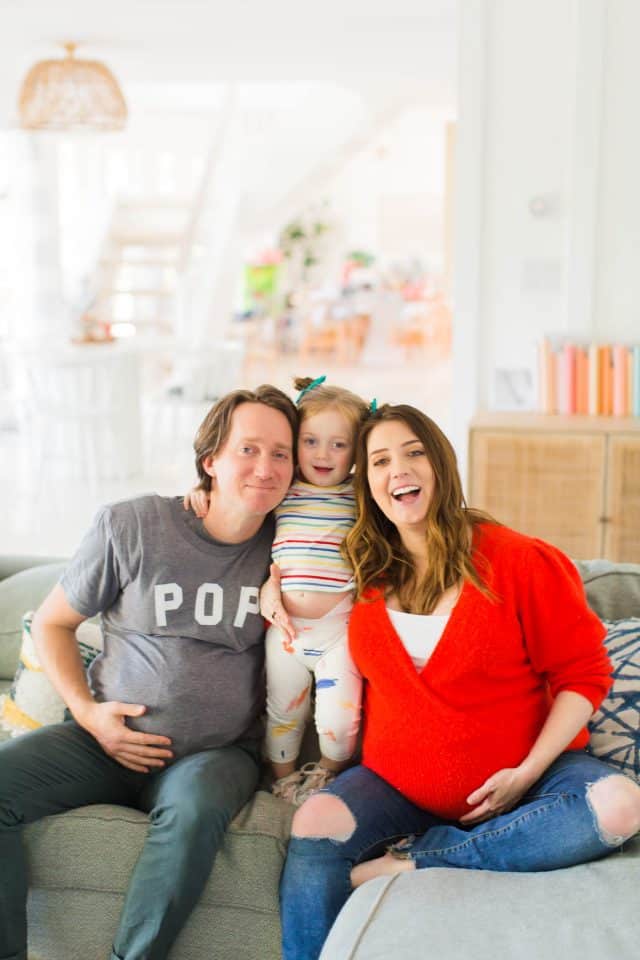 Q: Speaking of being out in public, how did that feel with people staring at you?

A: “The craziest looks I’ve ever gotten in Target, but all in all it was funny.”

Q: How come you didn’t make it the full 24 hours and sleep with the belly on?

A: “Ummm, honestly I was just super uncomfortable and wanted to take it off…”

Q: Would you ever let me sign you up for a pregnancy pain simulator?

Let’s all take a vote and see if we can make Jared sign up for a video on the pain simulator, okay?! 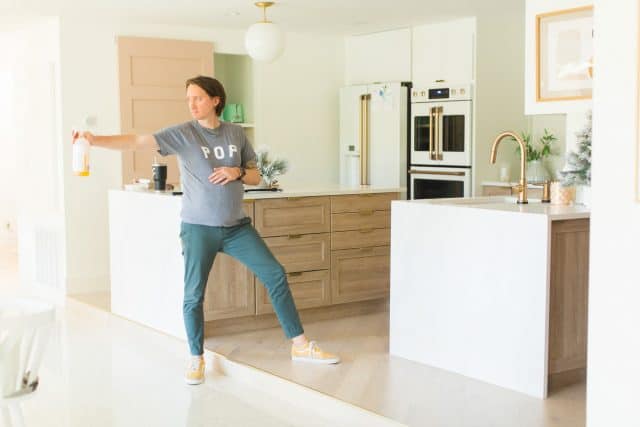 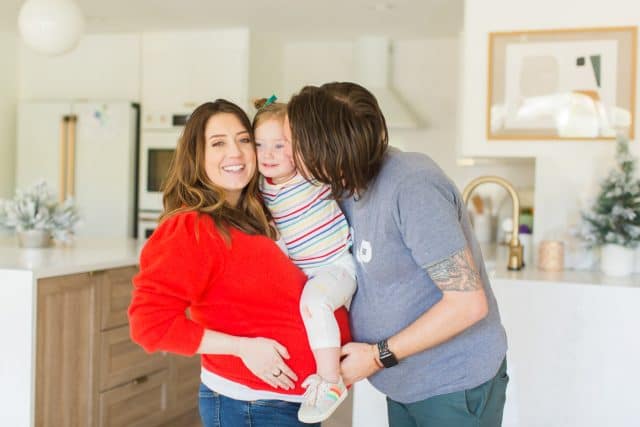 Where to Get an Empathy Belly

Ironically, this is our second experience with renting an empathy belly for Jared to wear, so we’re basically experts. Ha! And I know you all are just dying to get one!

In all seriousness, we have had a great experience with renting from Home School Babies and would highly recommend it.

It’s worth it for the laughs if nothing else! 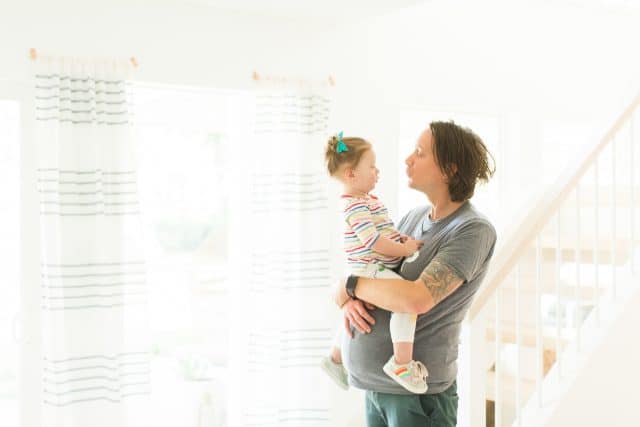 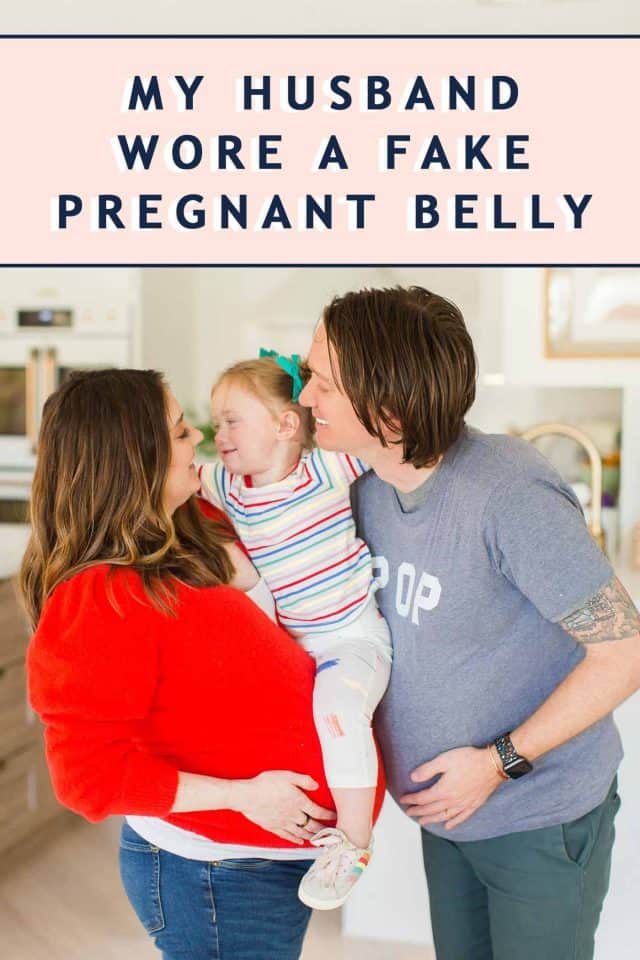 And now, boys and girls, here’s for the video we’ve all been waiting for…

For anyone curious how Gwen reacted to seeing her Dad wearing the pregnancy belly, she honestly wasn’t phased. She actually kissed his belly whenever I asked her “where’s baby?”, haha!

Also wanted to give Alyssa Renee a huge thank you for the video and photos of this slightly chaotic day in the life.

While they might not be as exciting as fake bellies, you can find more of our parenting and mom life reads here — 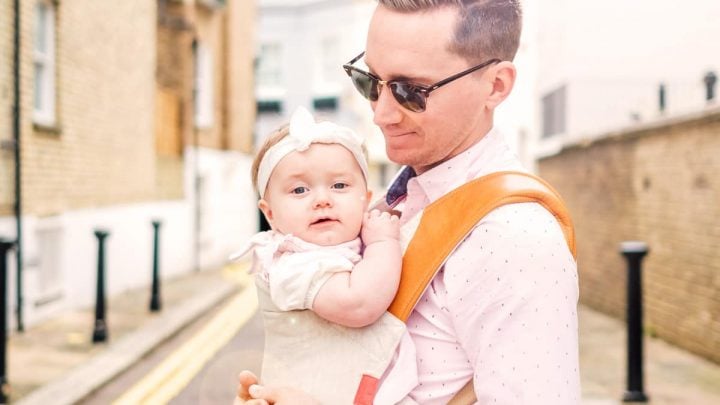 Tips For Traveling With A Baby 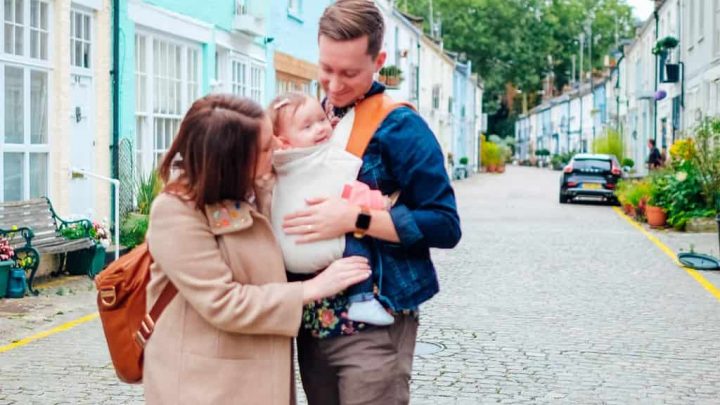 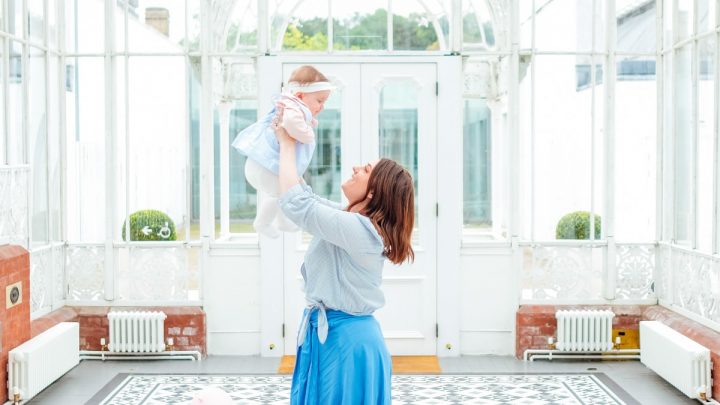 Flying With A Baby: Our Tips + Travel Documents You Will Need 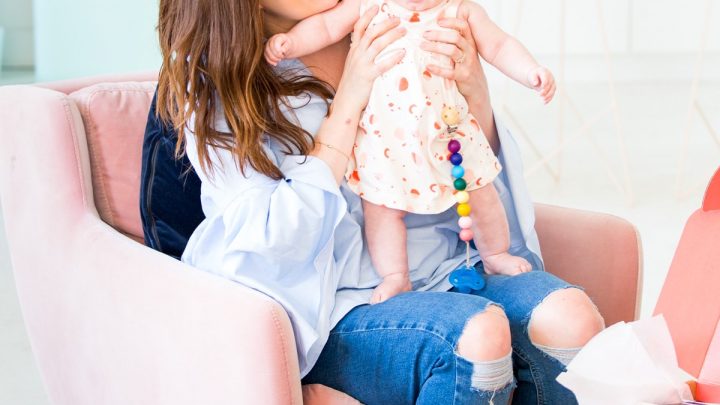 My Favorite Baby Products To Register For 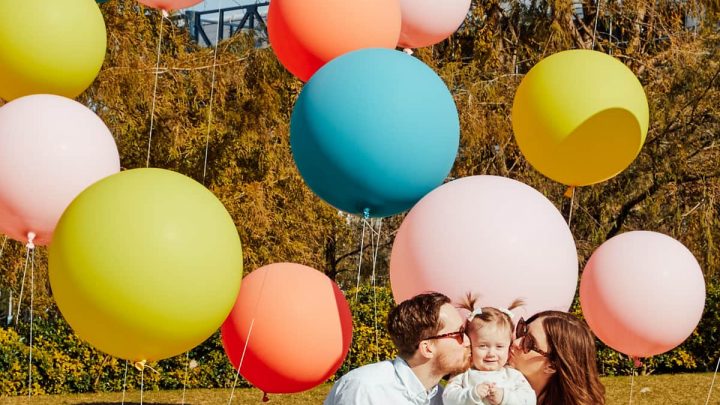 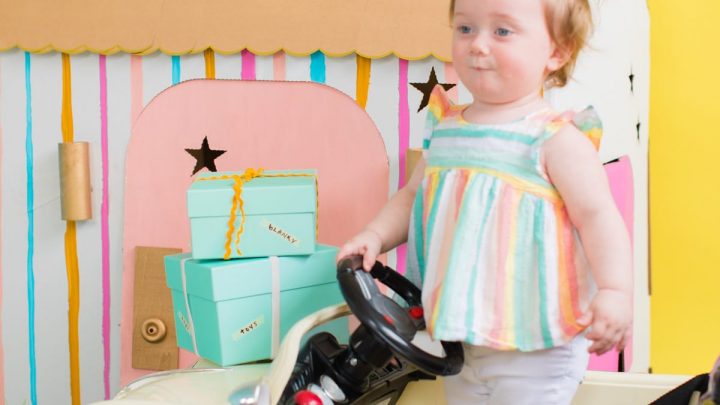