Kitchen Before And After — I’ve never been more excited about a room reveal than getting rid of our old kitchen! Here are the new kitchen before and after photos… 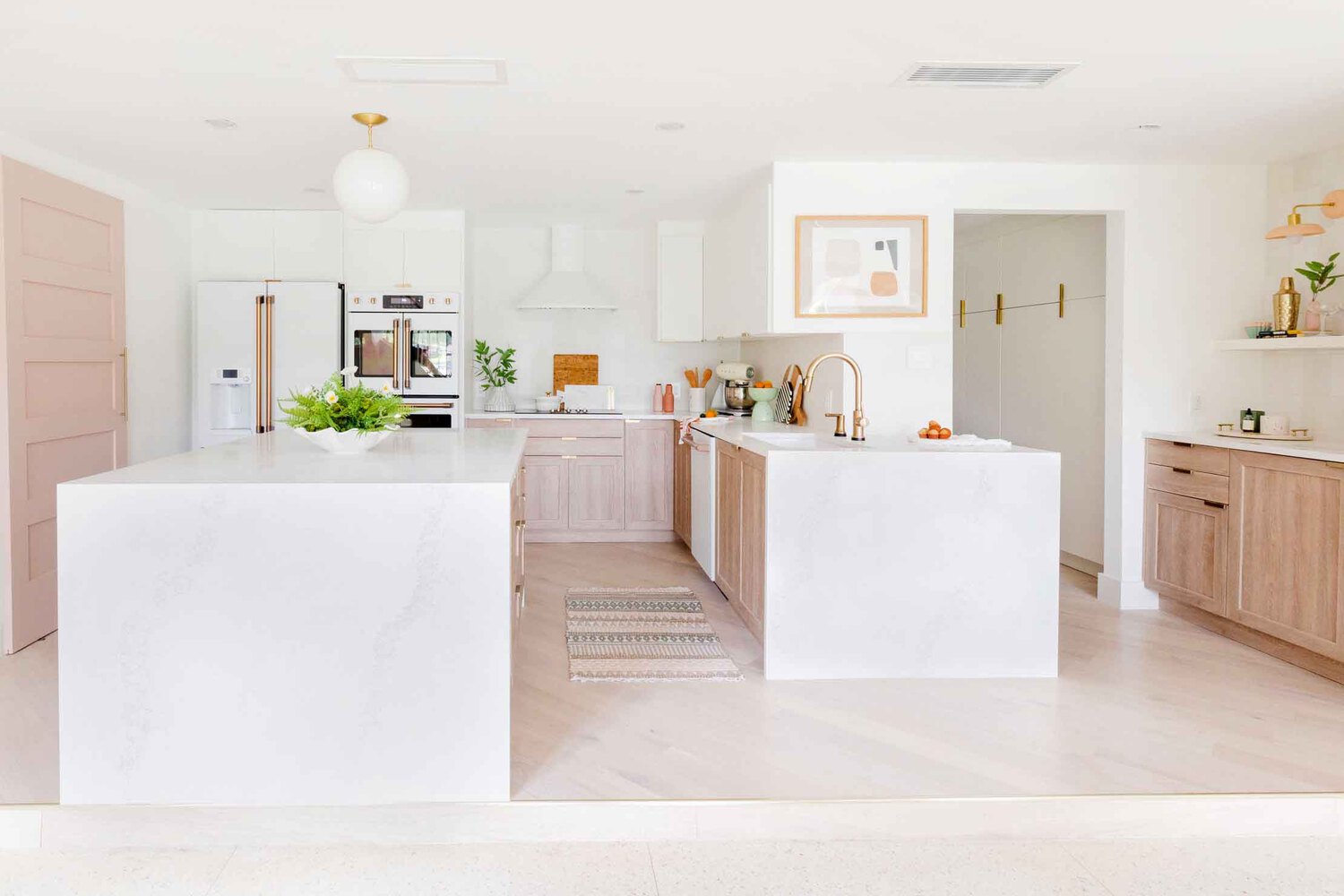 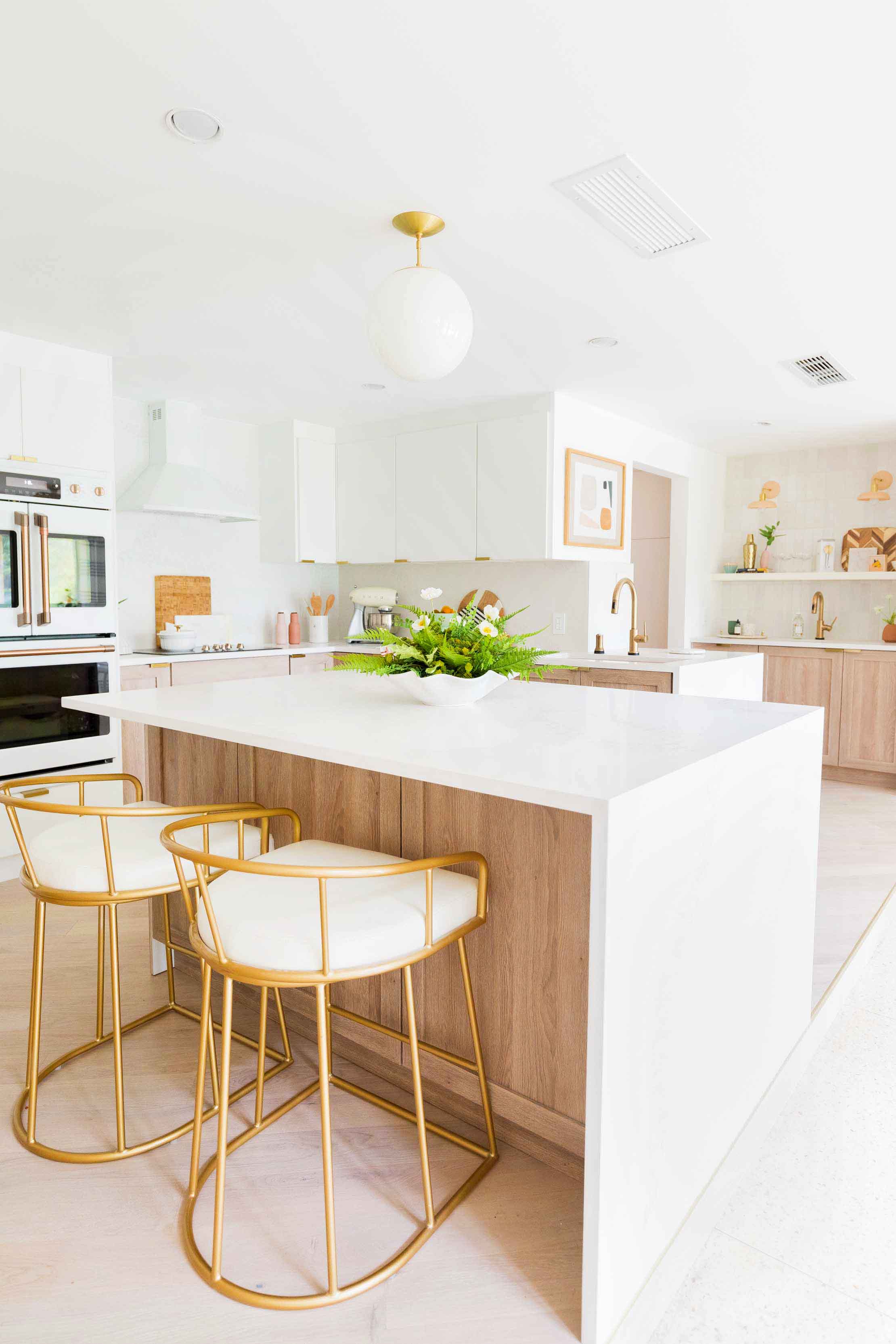 This post has been SUCH a long time coming! I shared our kitchen design plan a while back. But I literally cannot tell you how excited I am to share the kitchen before and after photos!

By far this was our most hated space from the original house listing photos. When we bought the house, the kitchen was really sectioned off, had an awkward layout, and generally just very dreary.

After redesigning the floorplan (see the changes we made right here!) and working with Genesis construction to gut and reframe the space, it’s now a much more inviting area.

We had about five thousand hurdles along the way, which I talk about in more detail here, However, I’m super happy with the finished product!

I’m not sharing photos of the walk-in pantry or breakfast nook off of the kitchen just yet. So stay tuned for those posts coming soon!

We do, however, have an appliance closet off of the main island and it’s what KITCHEN DREAMS ARE MADE OF.

In case you’re looking for the cliff notes version of this before and after, you can scroll to the bottom of the post for the side-by-side before and after photos and the list of room sources! 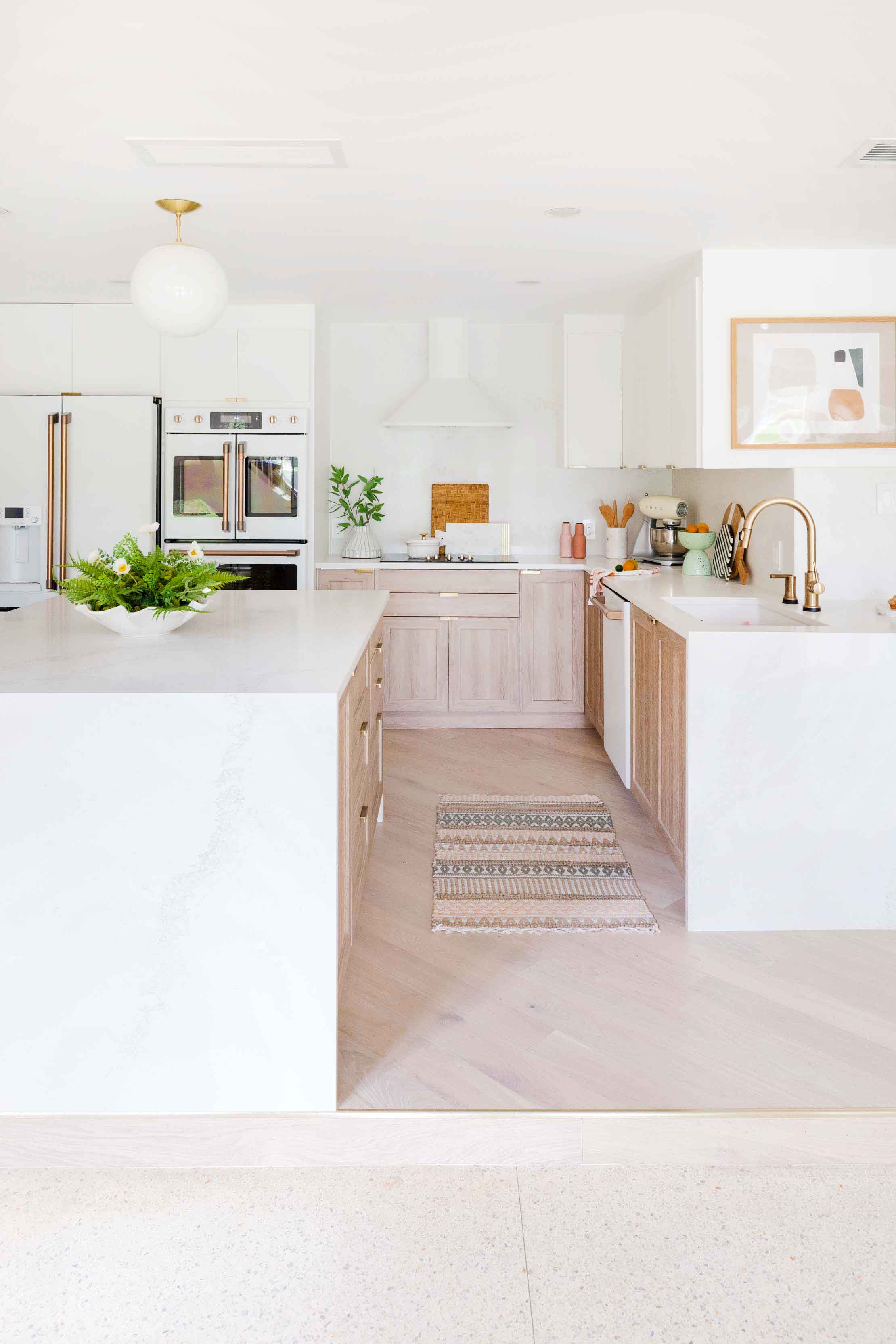 One of the non-negotiables of this renovation was getting rid of the weird ceiling drop down from before.

The previous owner added ductwork to the house to flow into the family room addition just past the kitchen. And it made everything feel very confined.

In an ideal world, we would’ve done away with the ductwork drop down AND the step up into the kitchen, but it was too much for our budget.

Plus, we were originally trying to keep the old terrazzo in the kitchen. Unfortunately, we weren’t able to salvage it. 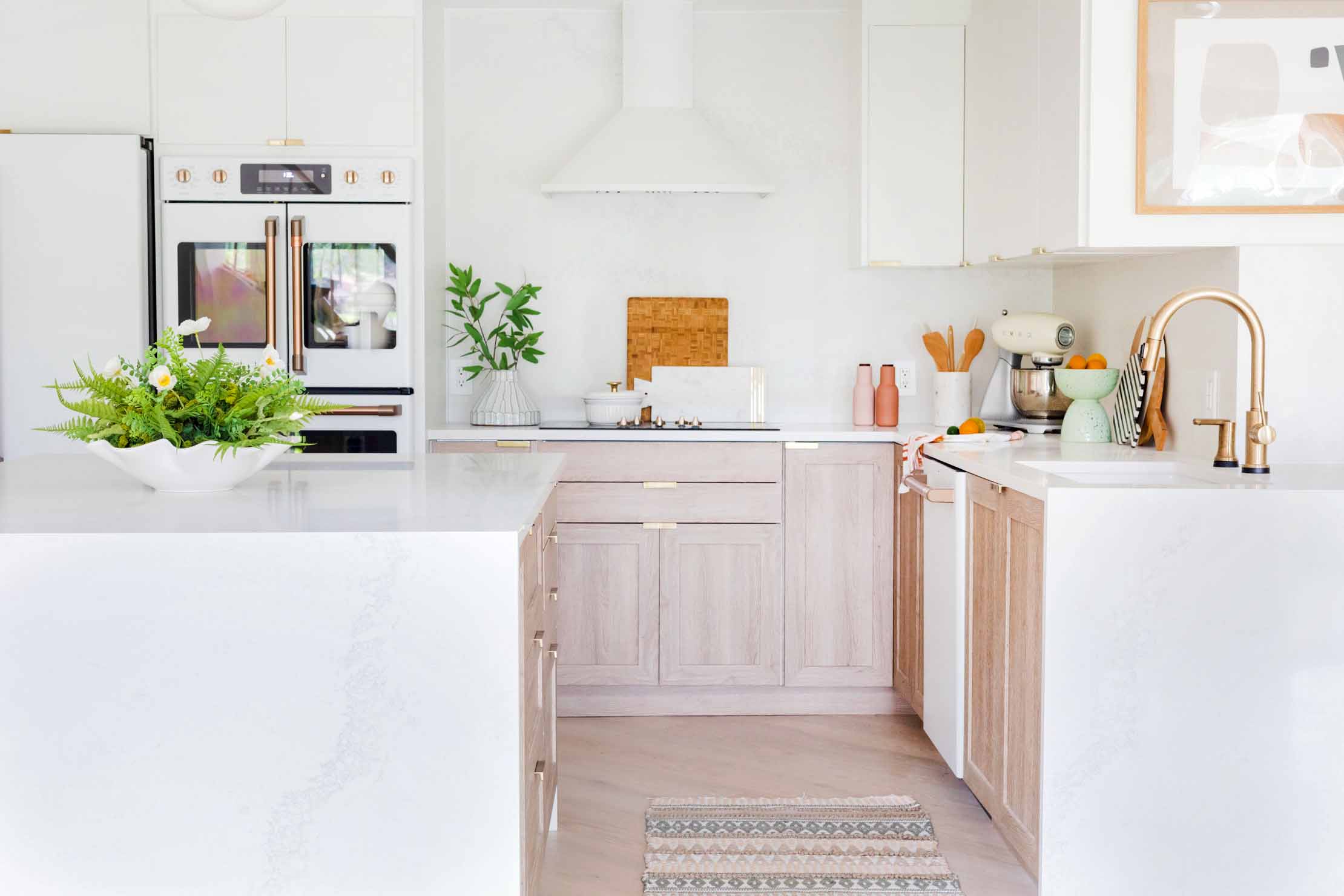 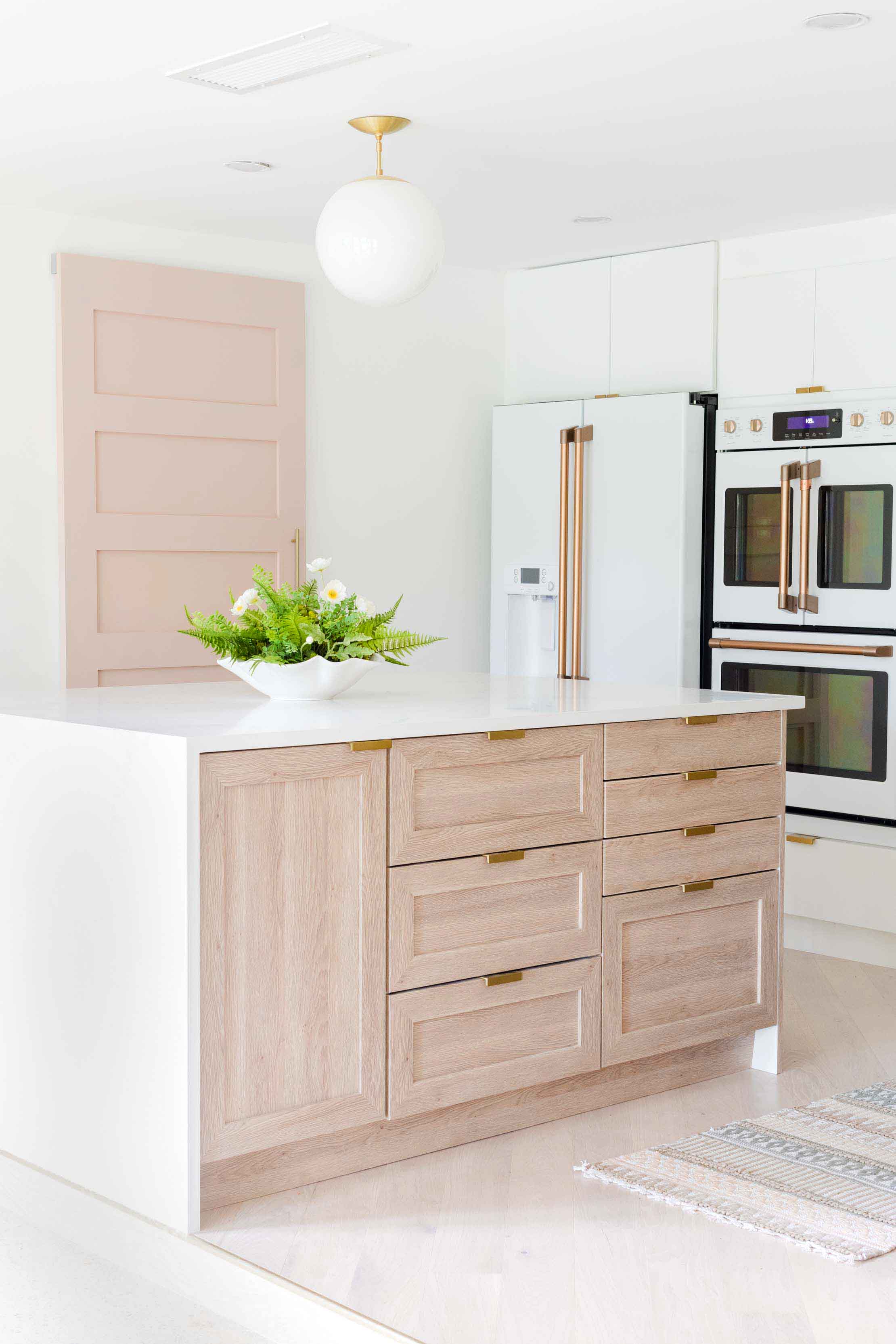 The cabinet fronts are meant to be used on Ikea kitchen bases. And it gave us a custom look without needing all custom cabinetry for the kitchen and pantry!

It gives the space a really serene feeling when paired with the white upper cabinets and walls.

We also kept the countertops and backsplash very minimal with matching Caesarstone slabs in Calcutta Nuvo. 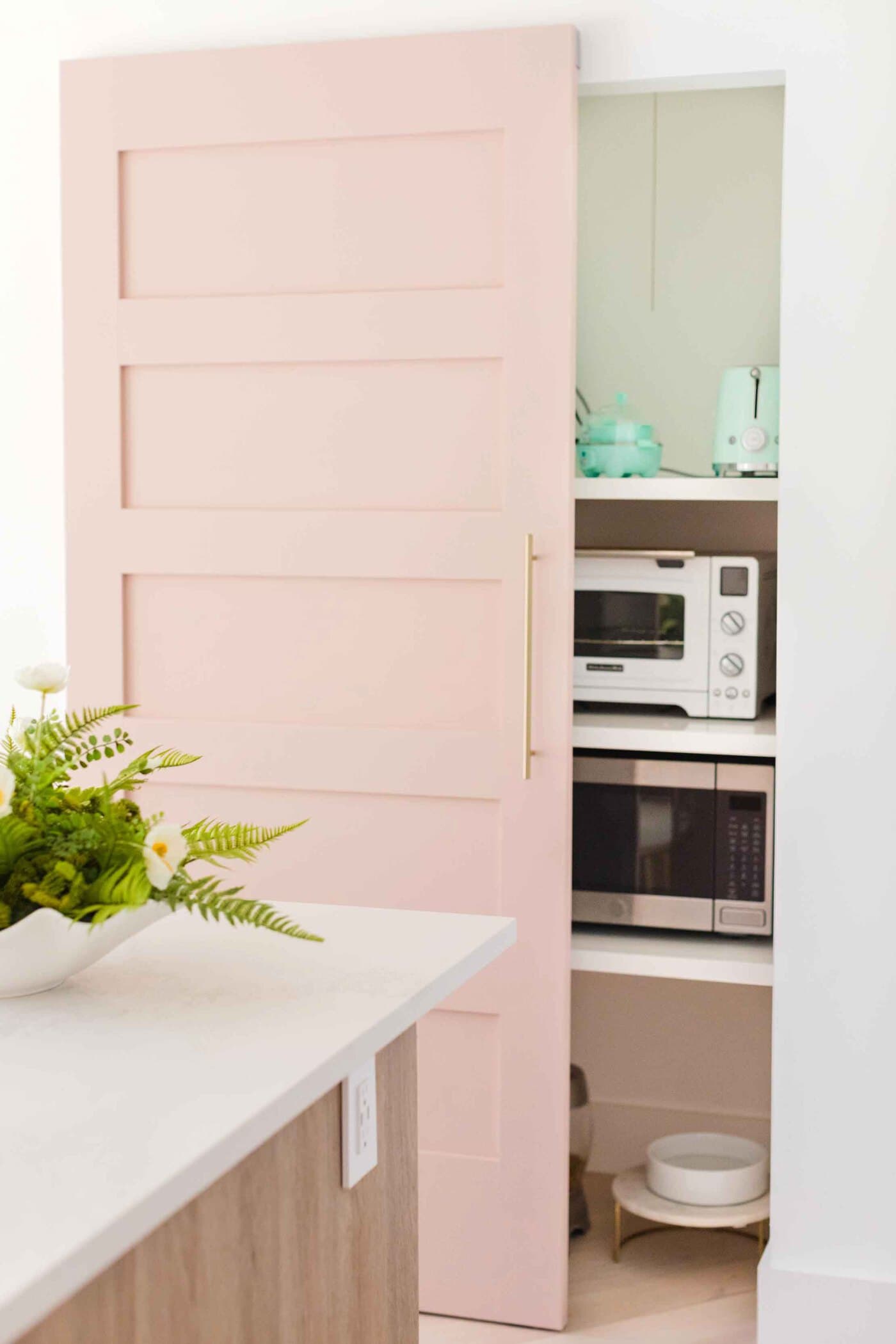 I was deadset on the appliances before we even began the design process! The GE Cafe collection from Ferguson Showrooms was so so beautiful that I HAD TO HAVE THEM!

I mean, can you even believe that double door wall oven with bronze hardware exists in real life?!

I love that they’re a major focal point in the kitchen and so glad we were able to conceal our usual countertop appliances in the old pantry that we turned into an appliance closet.

I wanted the appliance closet to be concealed rather than open. But because of the structural supports, we could only use a sliding door.

The traditional barn door hardware wasn’t the vibe I was going for in this room, and a reader actually let me know about a concealed sliding door system.

It’s definitely pricey, but so worth it for a streamlined final look! 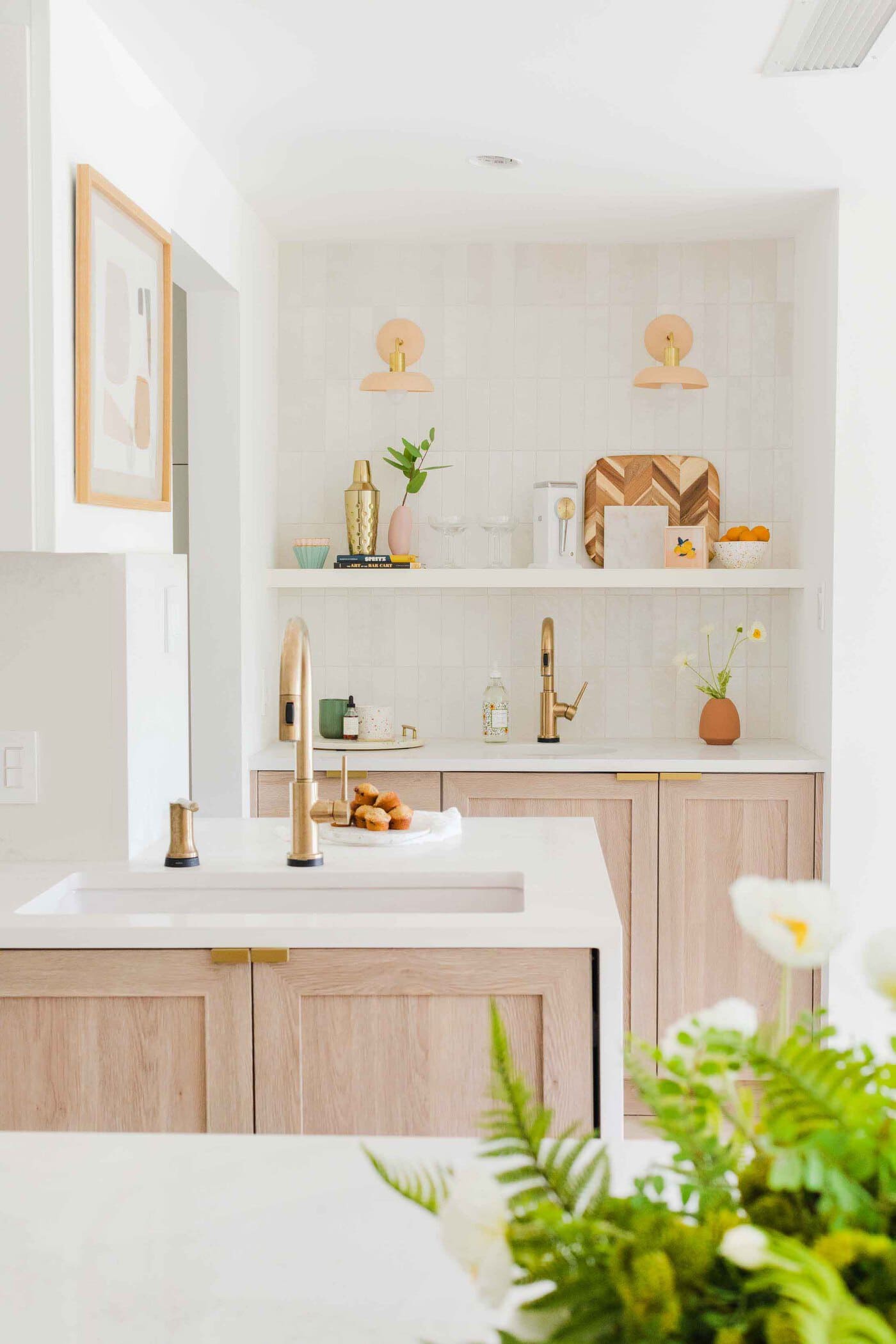 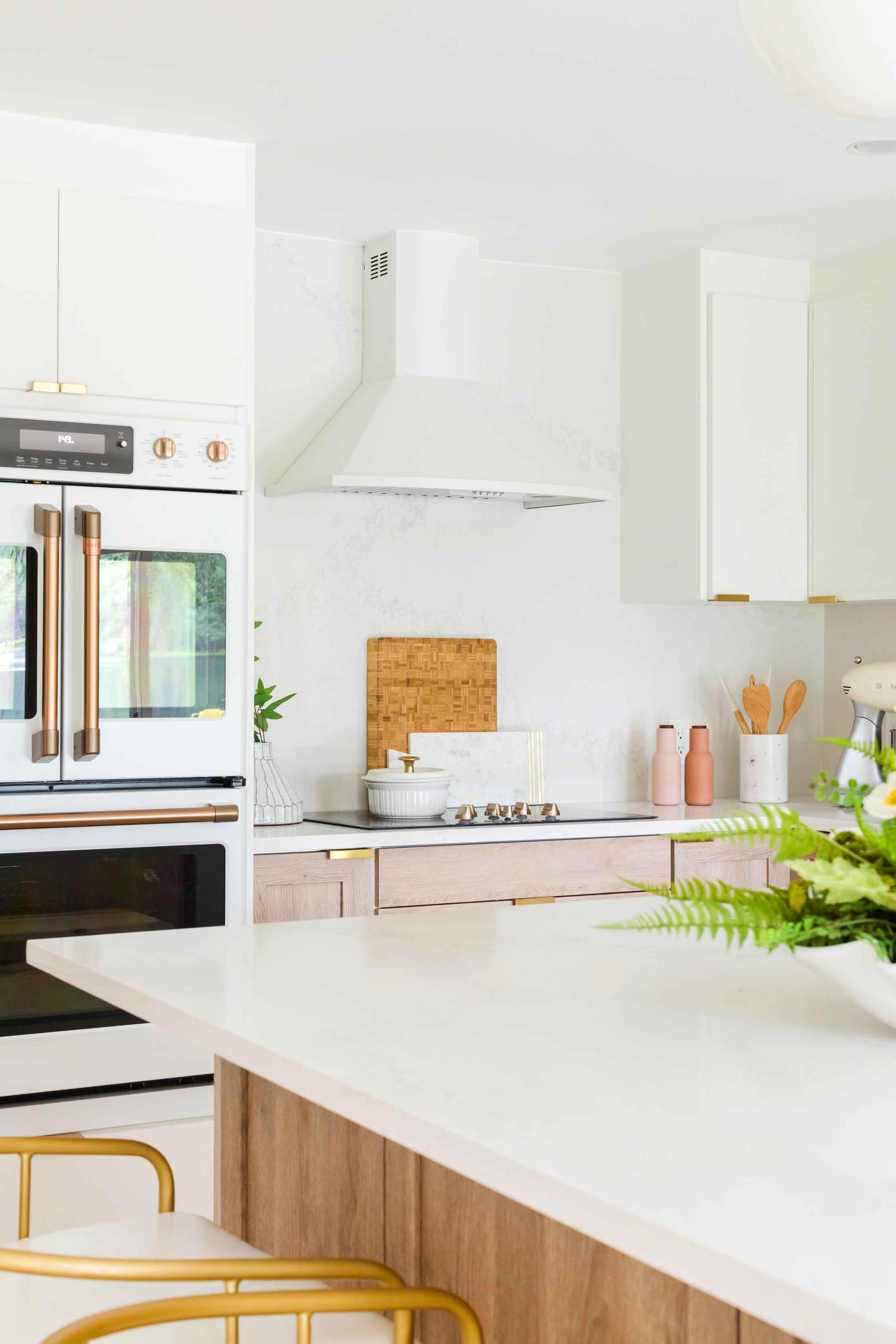 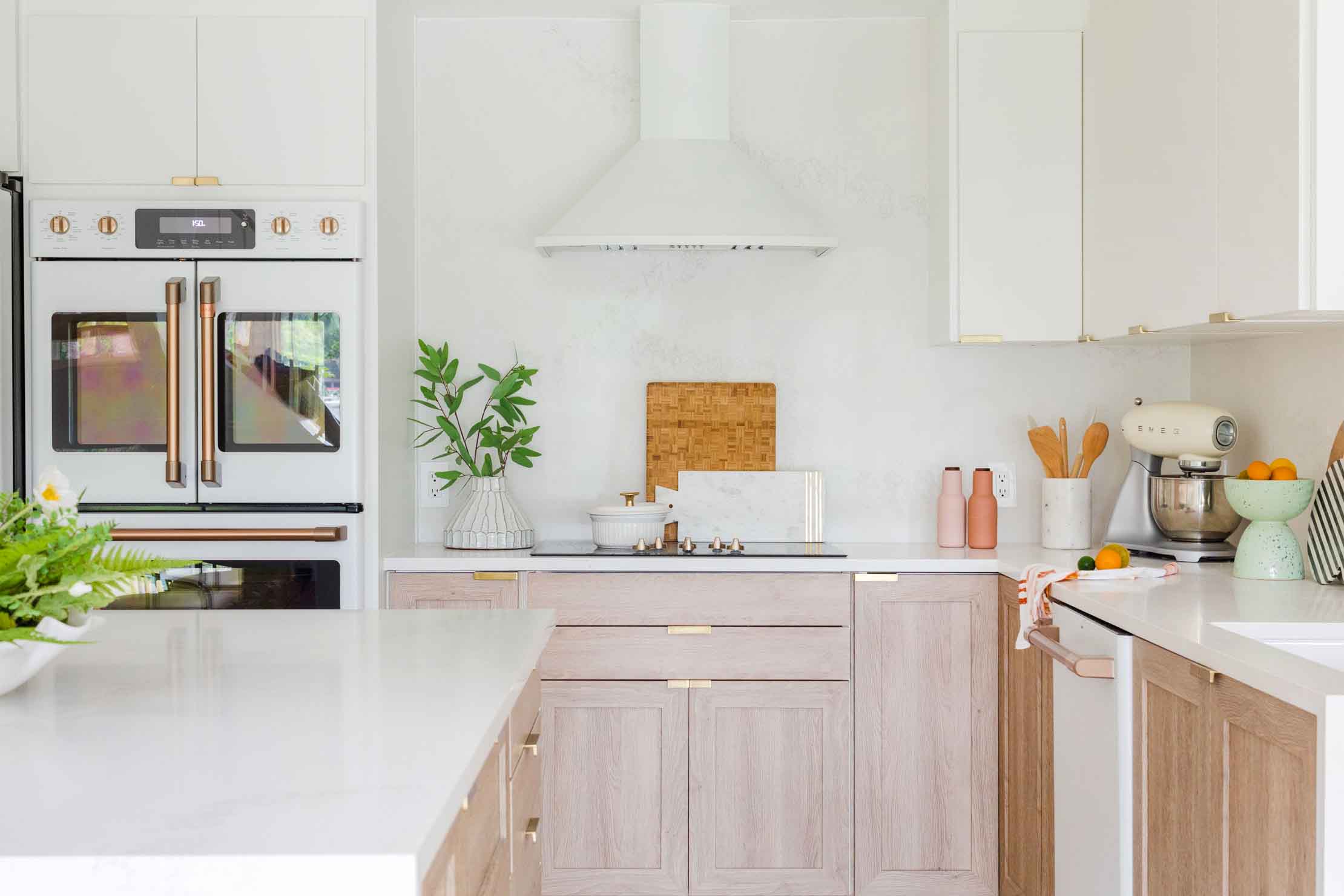 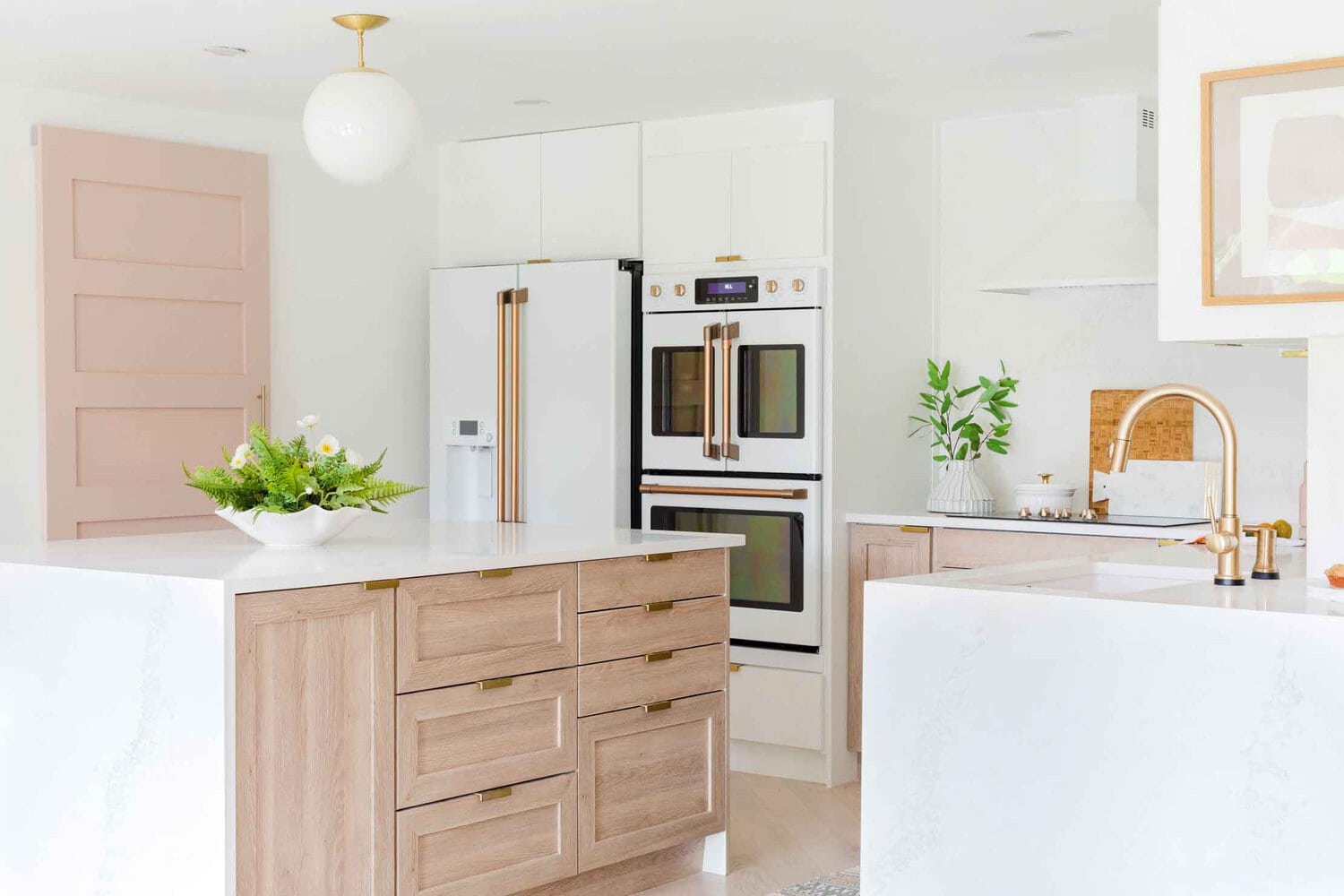 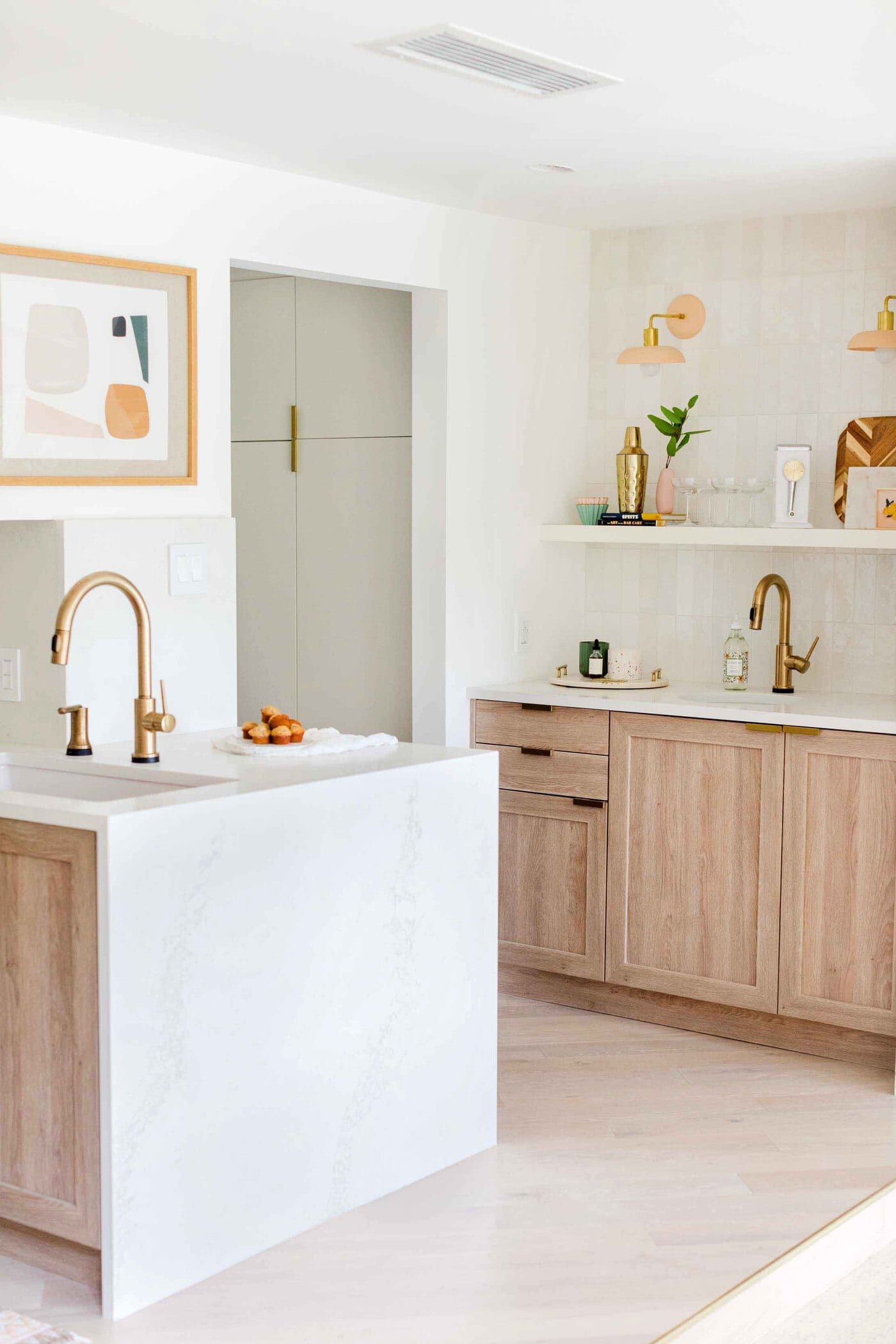 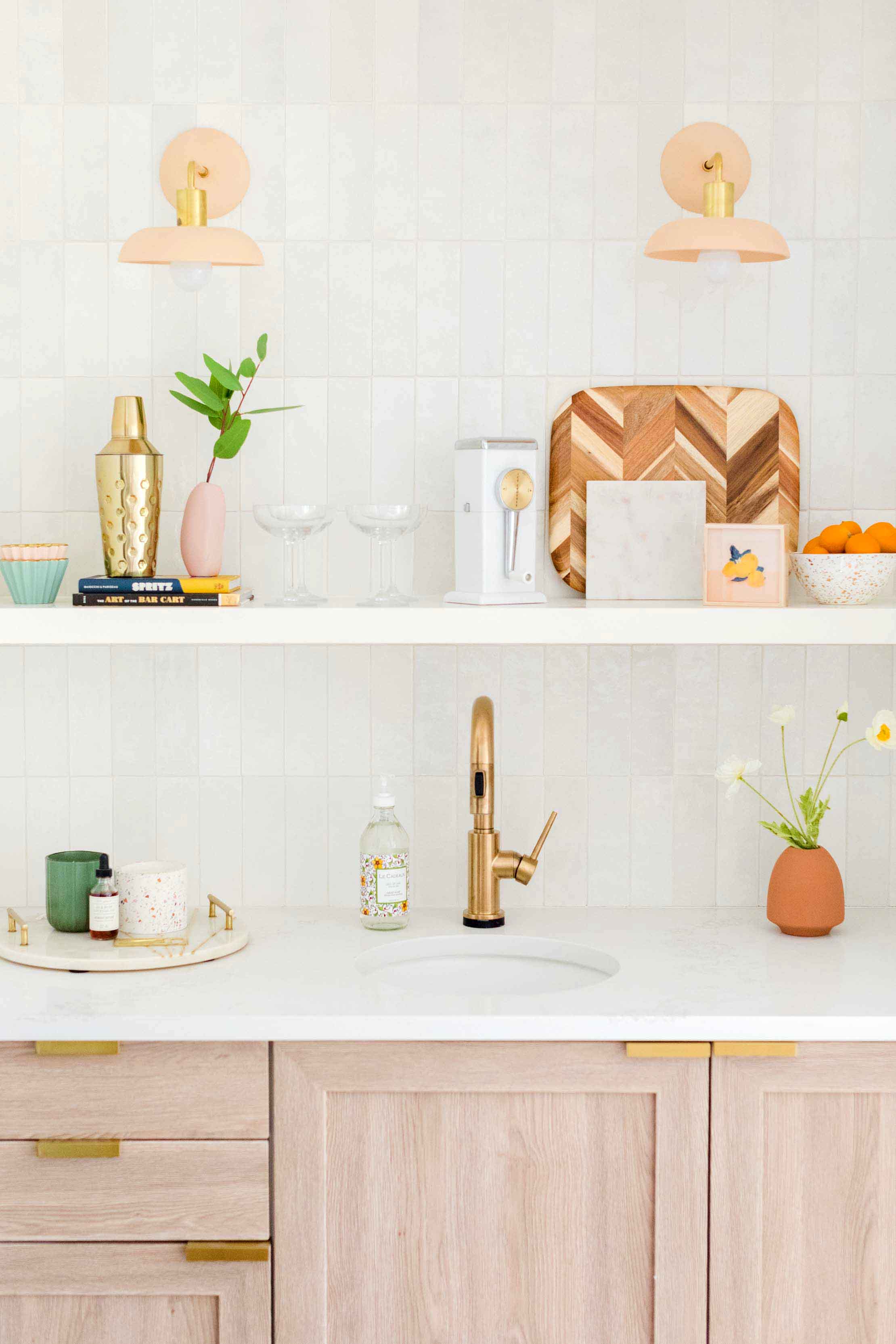 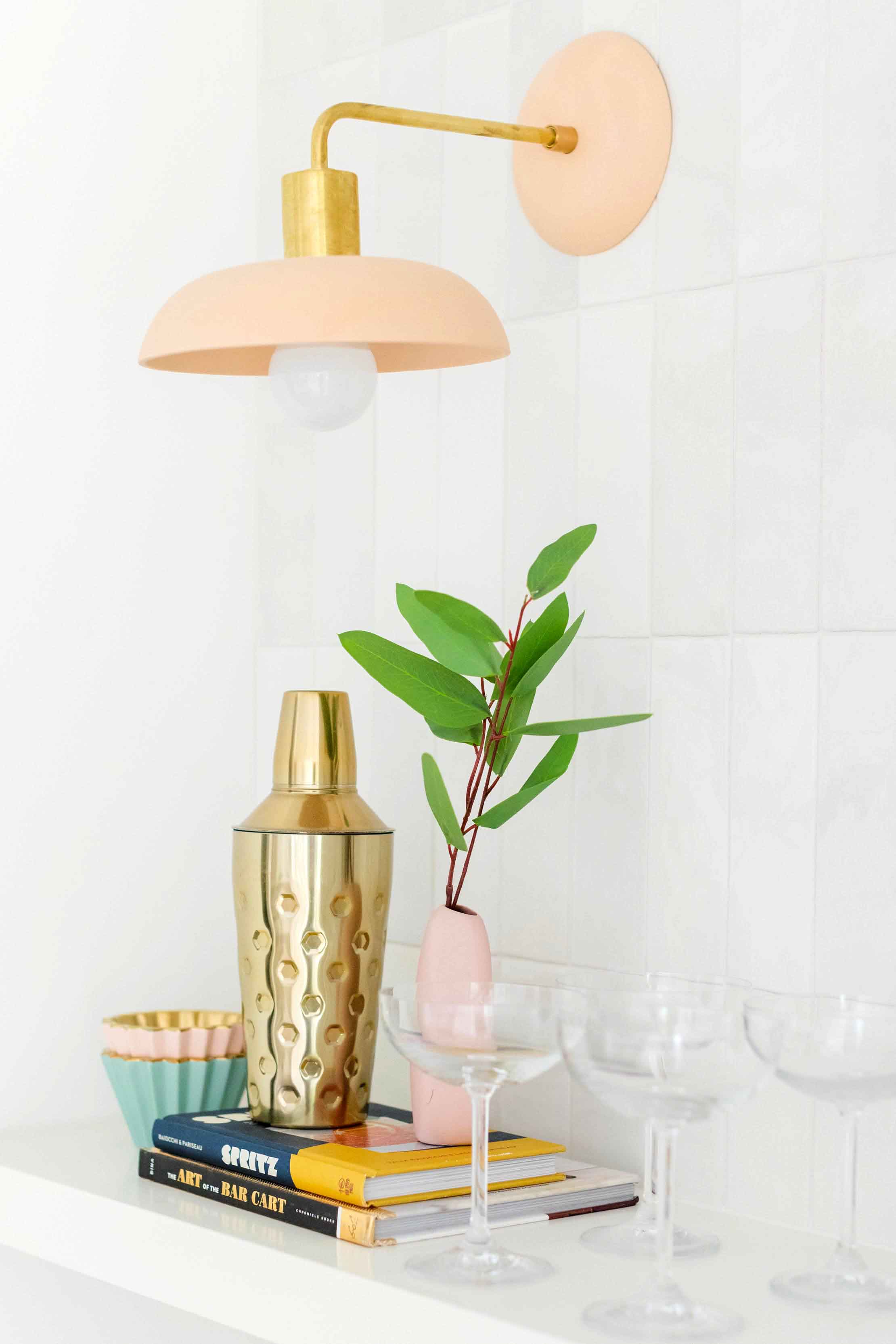 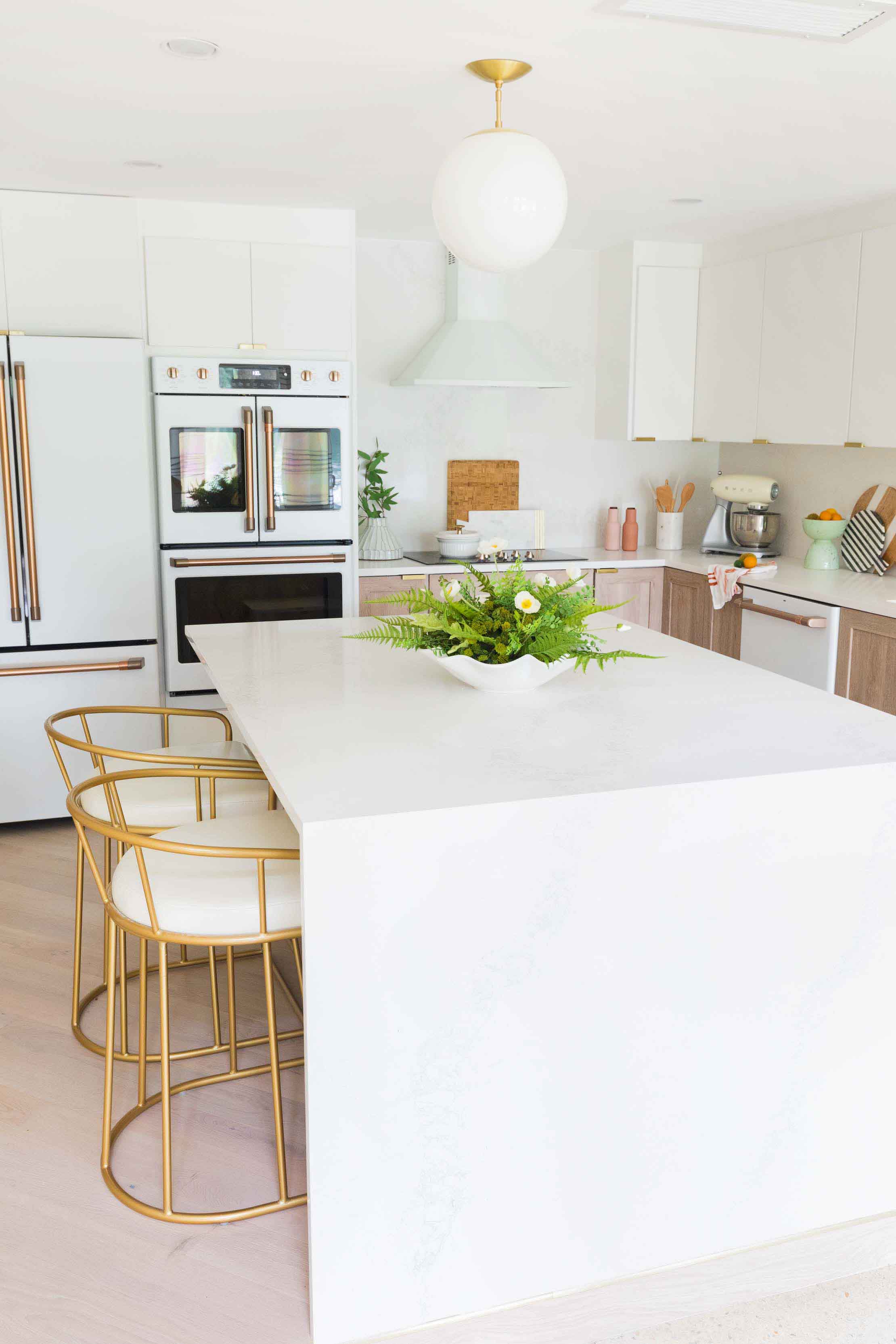 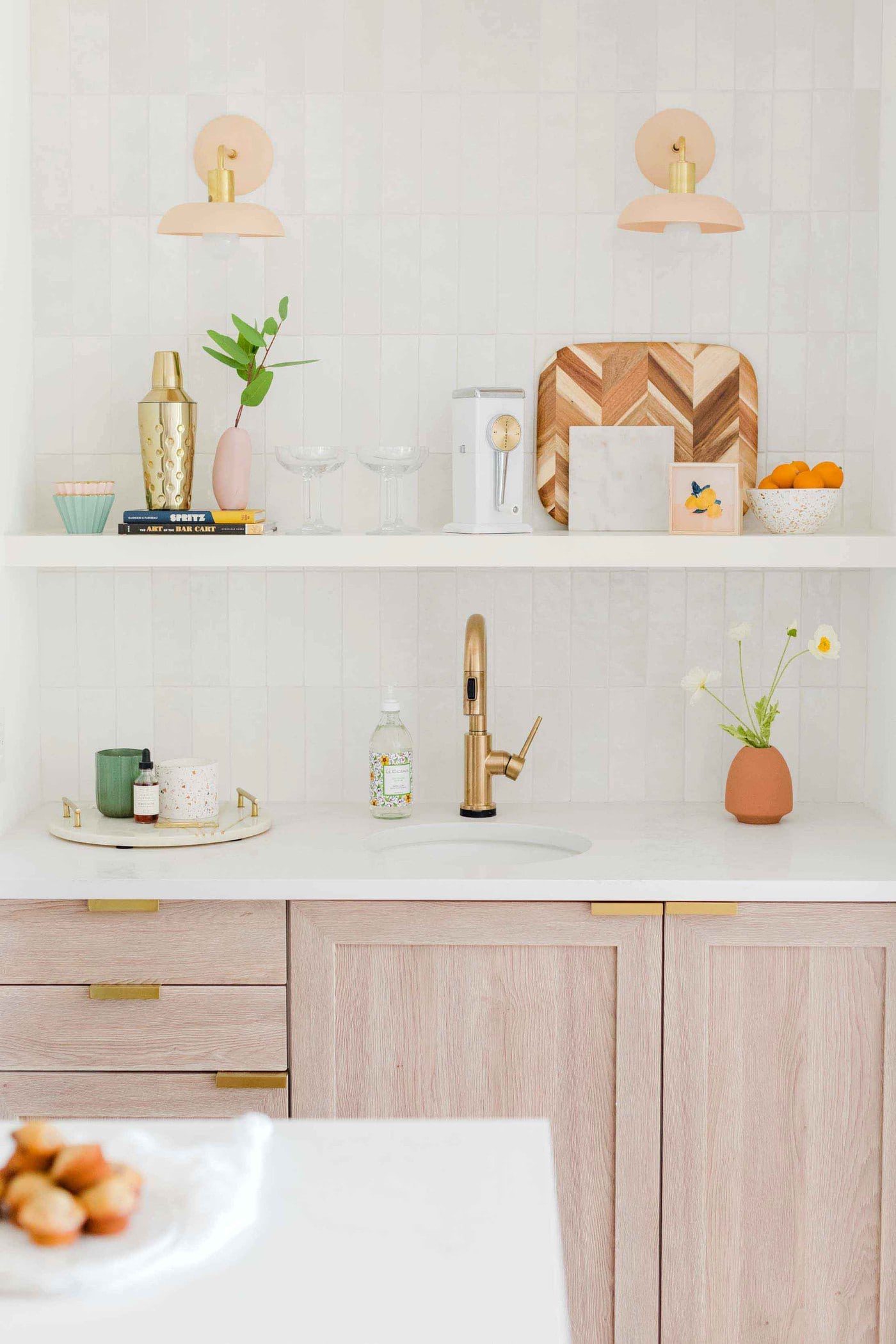 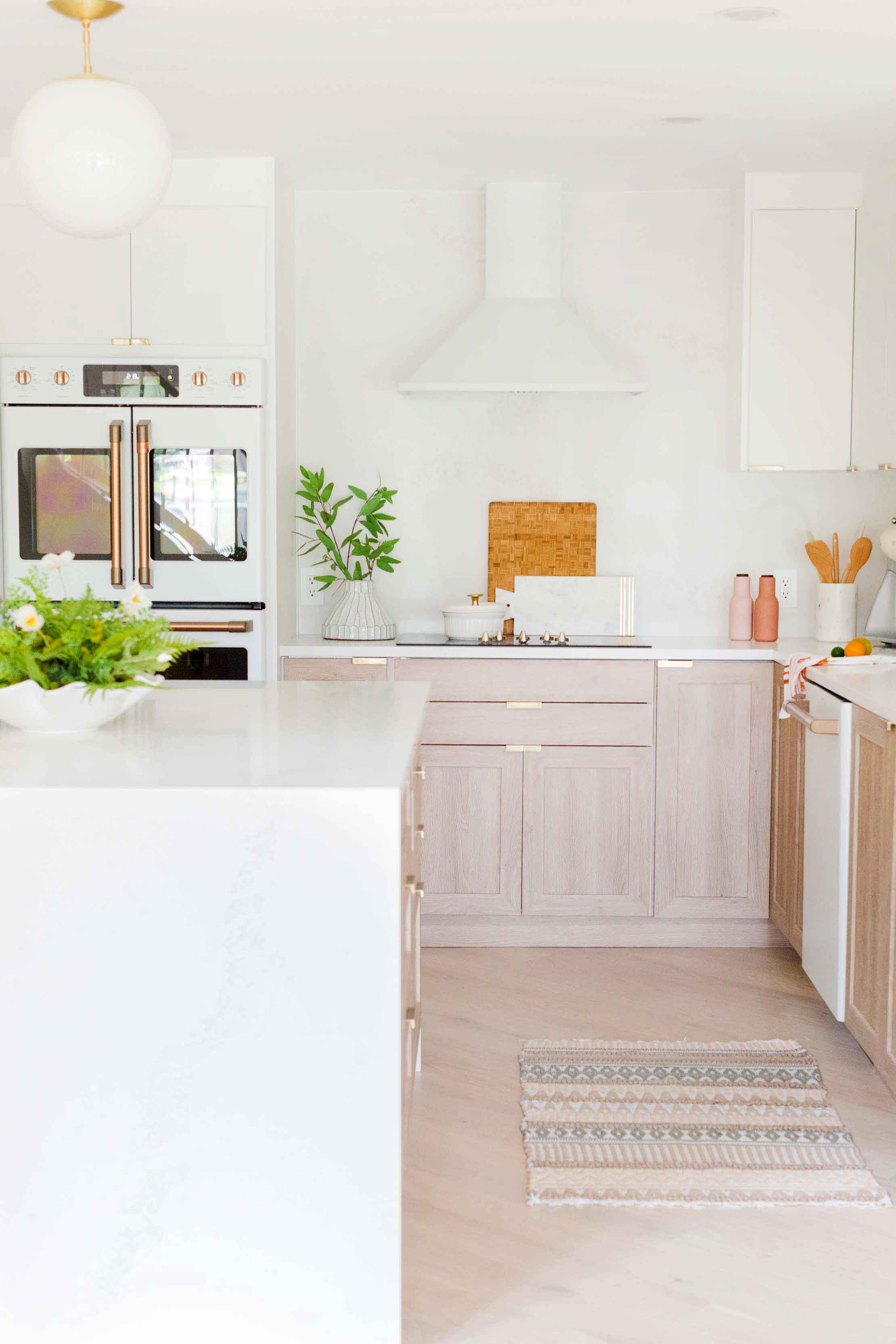 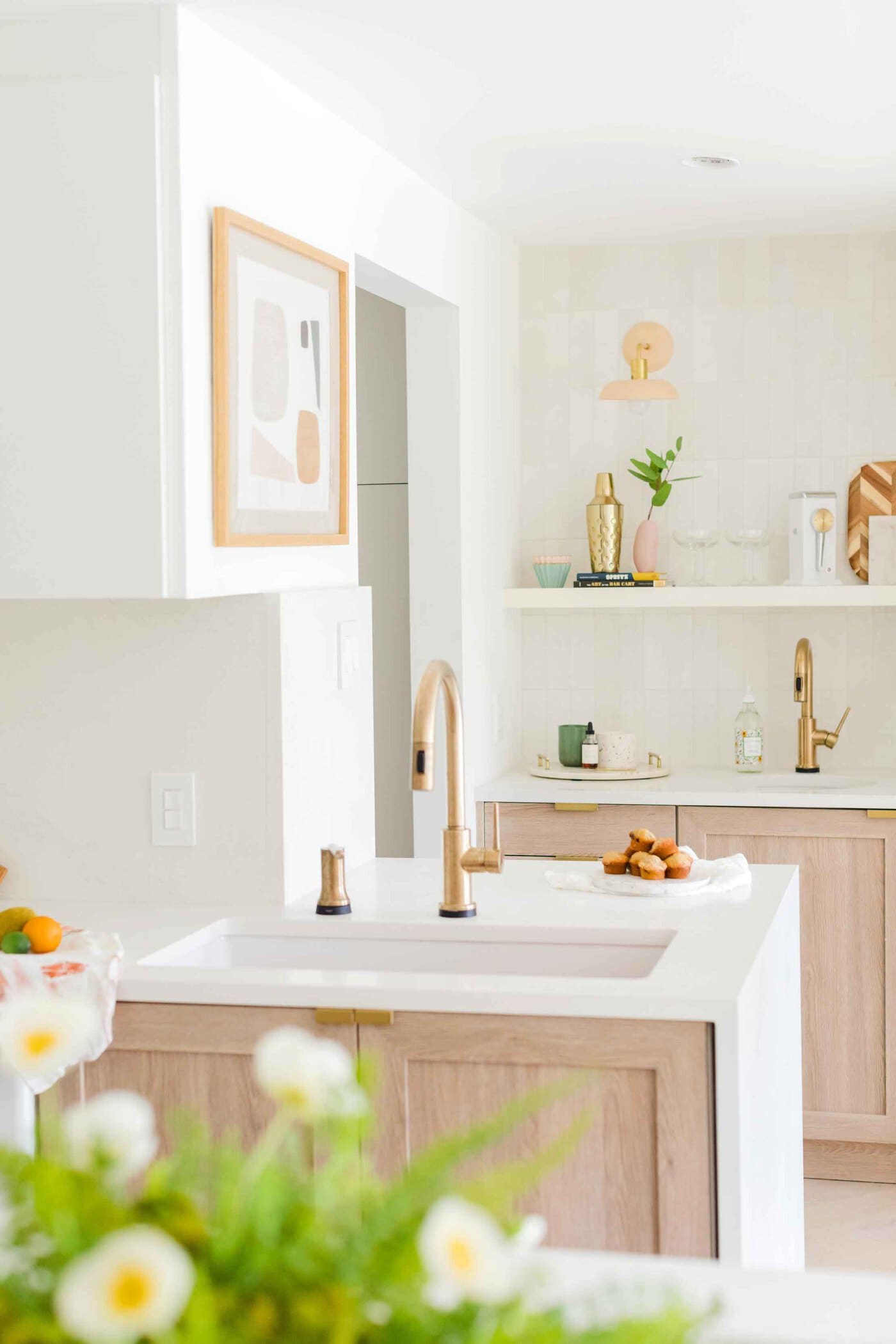 We also had some trouble trying to decide where to place the sinks since the only windows in this space are off the breakfast area. I didn’t want to the sink to be in the island looking out because I don’t love the idea of sink clutter on the main entertaining surface.

We ended up keeping the sink in the same place as the before layout but made it a bit shorter so that there was a walkway to the new walk-in pantry that leads to the garage. We also kept the previous wet bar sink but upgrade the look and opened the layout with the new pass through.

The sinks did get a major upgrade with new Delta Touch2o faucets and we’ve never felt more high-tech! It’s especially convenient when you’re cooking with messy hands. I’ve gotten so used to it that I go to friends houses and accidentally tap the faucet thinking it’s going to turn itself on magically!

I LOVE the way the Cedar & Moss sconce lights are the perfect subtle pop of color on the distressed white tile! 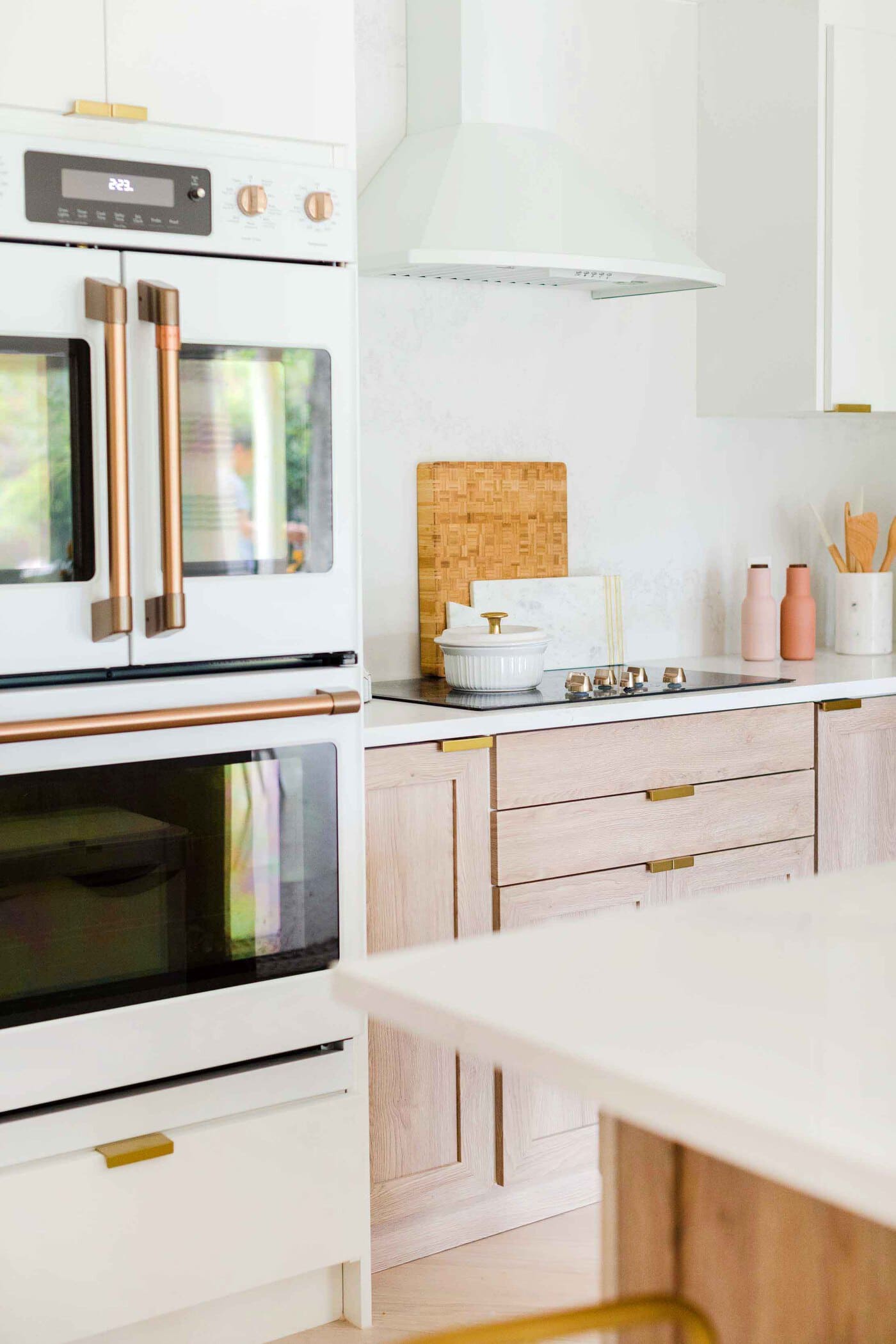 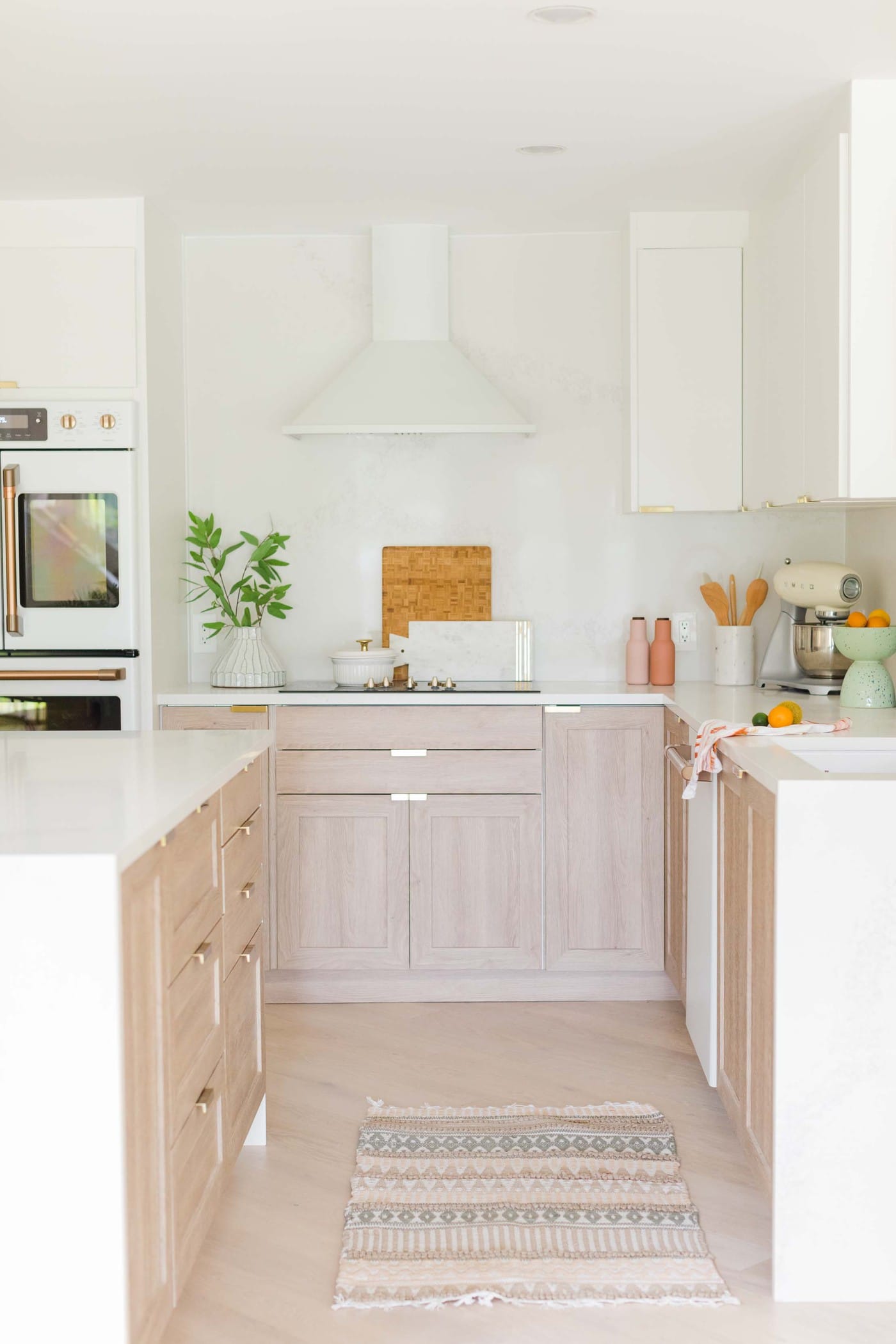 Honestly, I can’t express JUST how satisfying seeing these before and after photos is! Haha! It’s been quite a long road. (If you follow along on Instagram, then you already know!) And it’s a sigh of relief to see how far we’ve come!

Also, let this be a testament that you can make a wonky layout work for you even if it doesn’t mean the traditional standards! 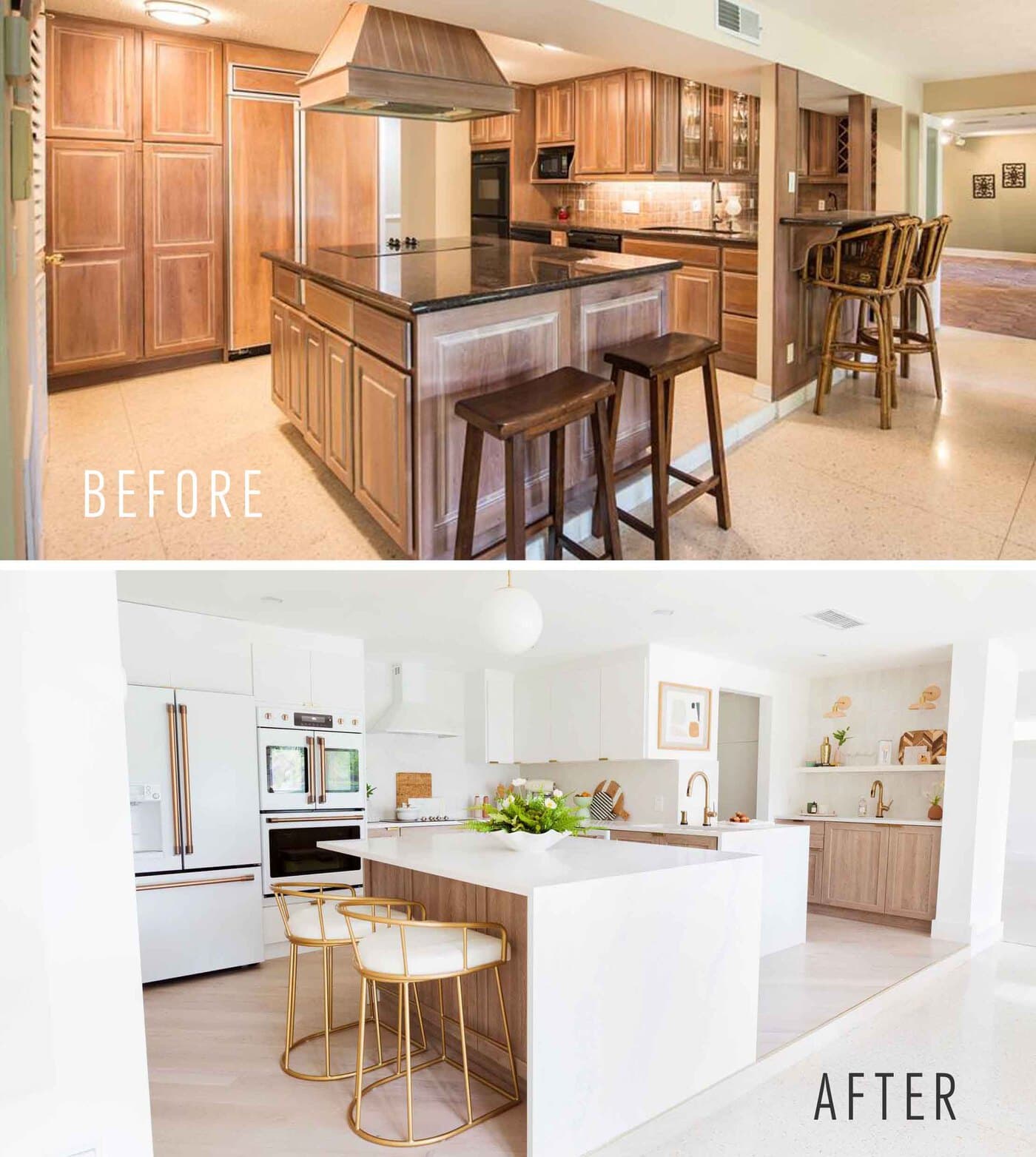 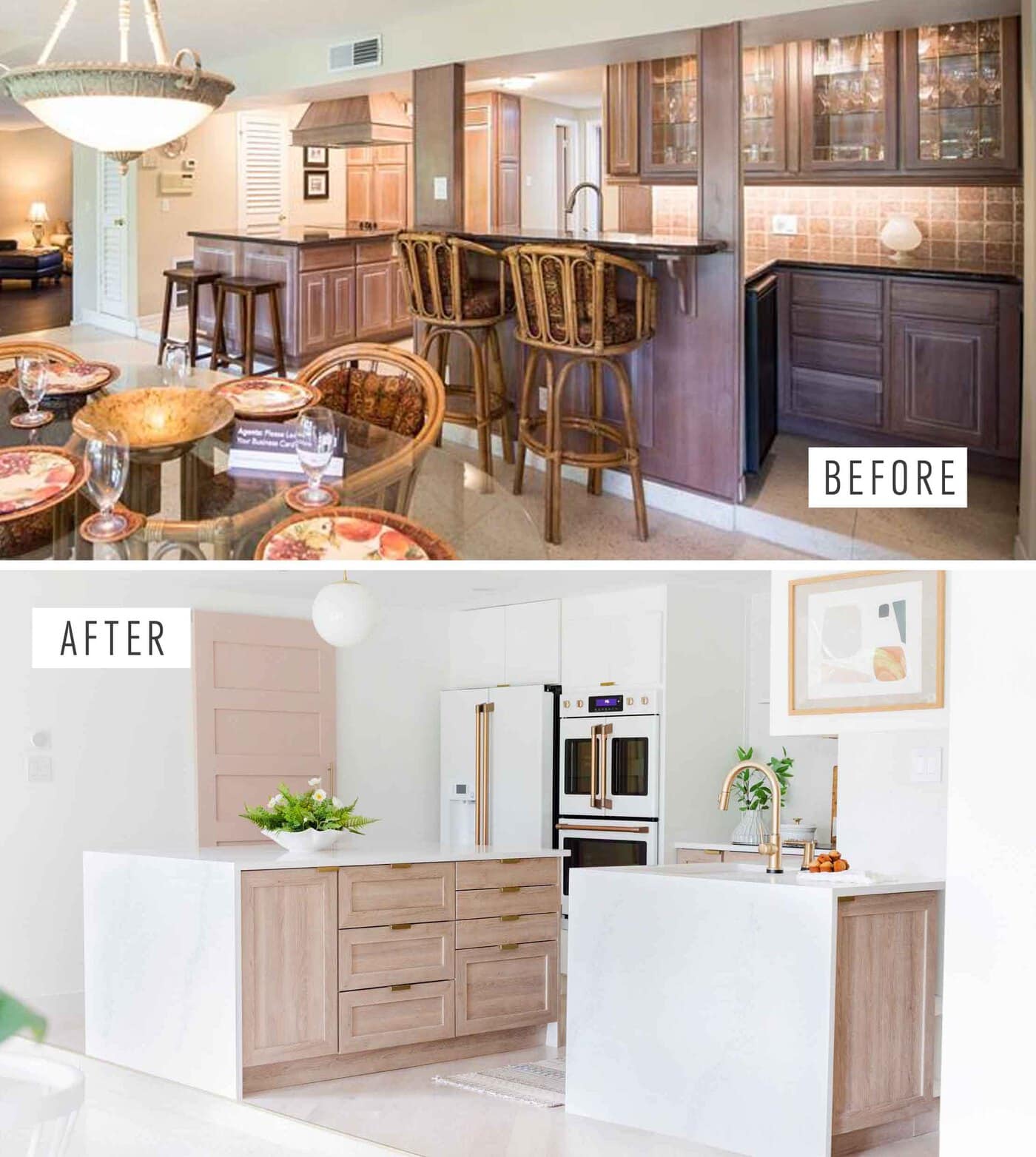 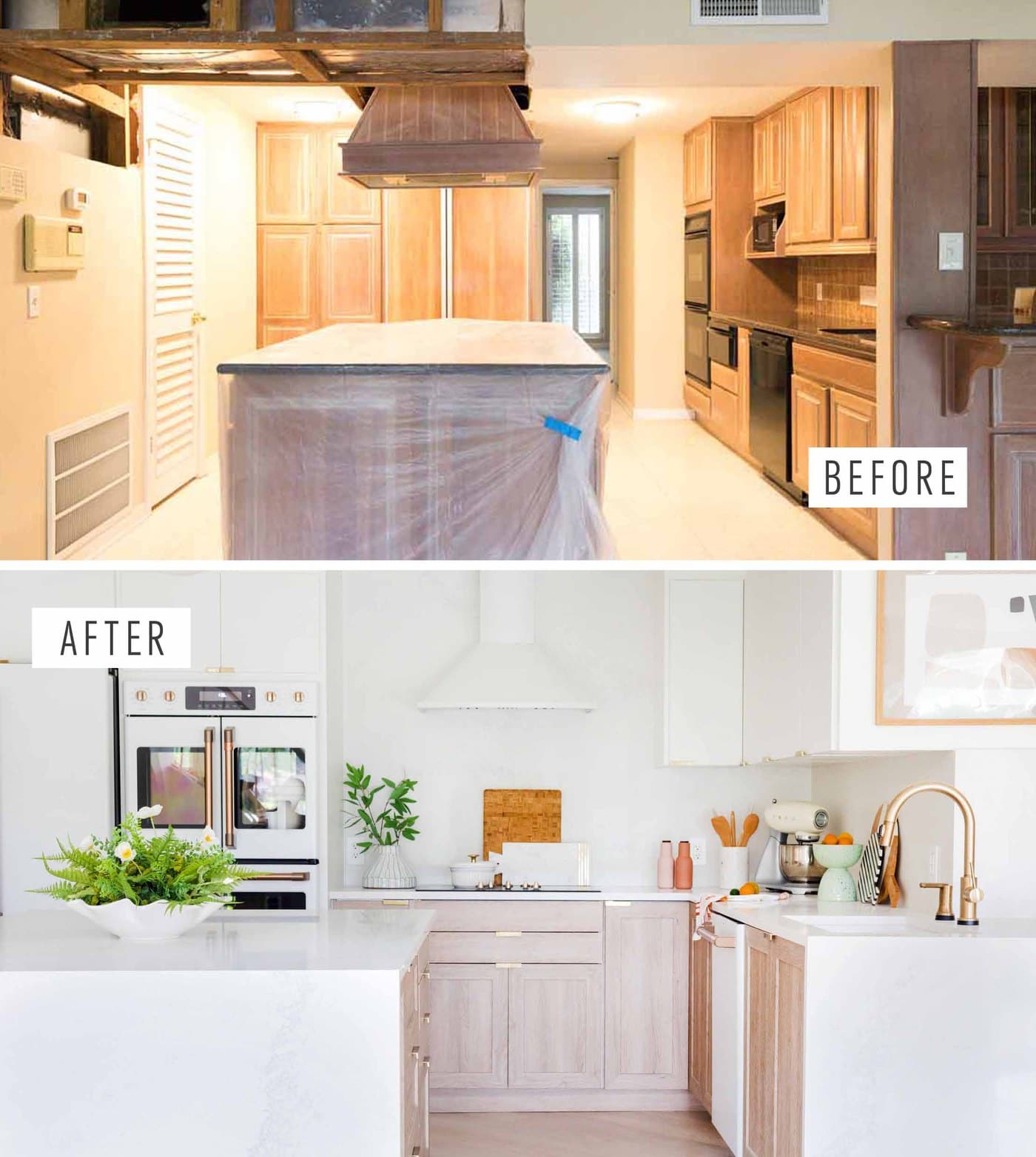 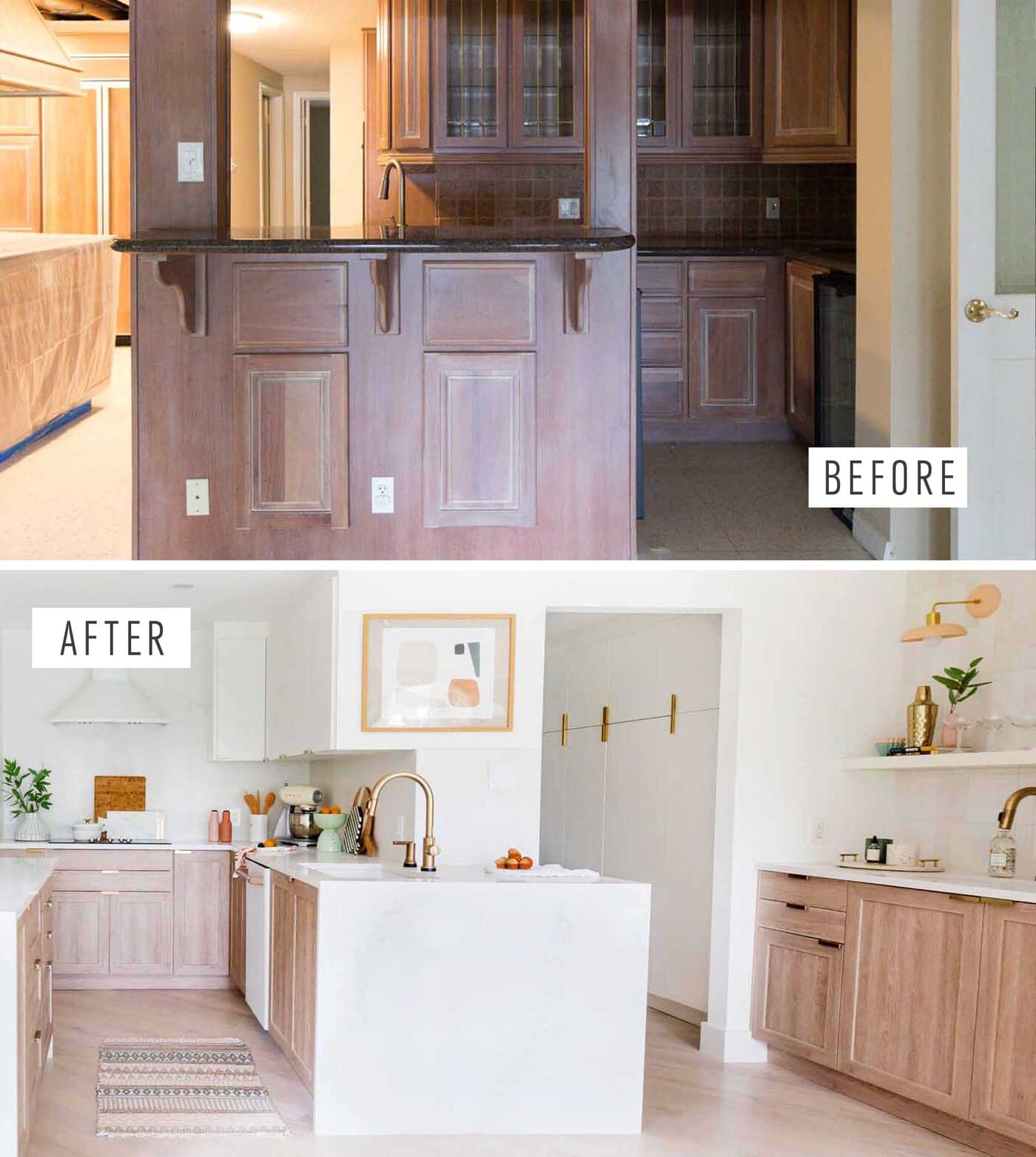 30 thoughts on “Sugar & Cloth Casa: Our Renovation Kitchen Before + After”