Alright, mamas, I want some of your input! We’re still learning the tricks of the trade when it comes to not looking like we’re moving in somewhere every time we leave the house with the baby, but I am proud to say that I’ve discovered the beautiful thing that is ToteSavvy, which lets you turn any handbag or tote into an organized diaper bag.

It’s been a lifesaver for me since I’m not exactly the most organized! I’m still figuring out what I actually need versus what I like to call “new mom paranoid hoarding”, but I’m sharing what I’ve been carrying around below. Essentially I keep these blush pink inserts packed at all times.

It makes it super easy to switch in between regular handbags based on the occasion without having to totally unpack and repack everything. Plus I like the idea of spending money on a handbag that I can use over and over once we’re past the diaper bag phase, too.

Thank you to those of you that replied to my Instagram poll on IG stories on which purse to go with to transform into a diaper bag… I obviously kept both of them, lol. I told myself it was a reward for birthing a human. Now getting to the nitty-gritty, what are your diaper bag essentials or hacks? Do any of you use the ToteSavvy, too?

Before I get to what I keep in mine, these are a few of the lessons I’ve learned already: always double check that you have extra wet wipes (that was almost a disaster until I found three left in a travel size at the bottom of the bag!), never take Dr. Brown’s bottles anywhere without a travel cap on them instead of a nipple lid (if not, there will be leaks EVERYWHERE every. time.), and always have a spare outfit (I’ve just been taking zipper onesies as backup).

Also, keep in mind she’s only 5 weeks old so we haven’t gotten to the stage of needing teethers, toys, etc around just yet!… 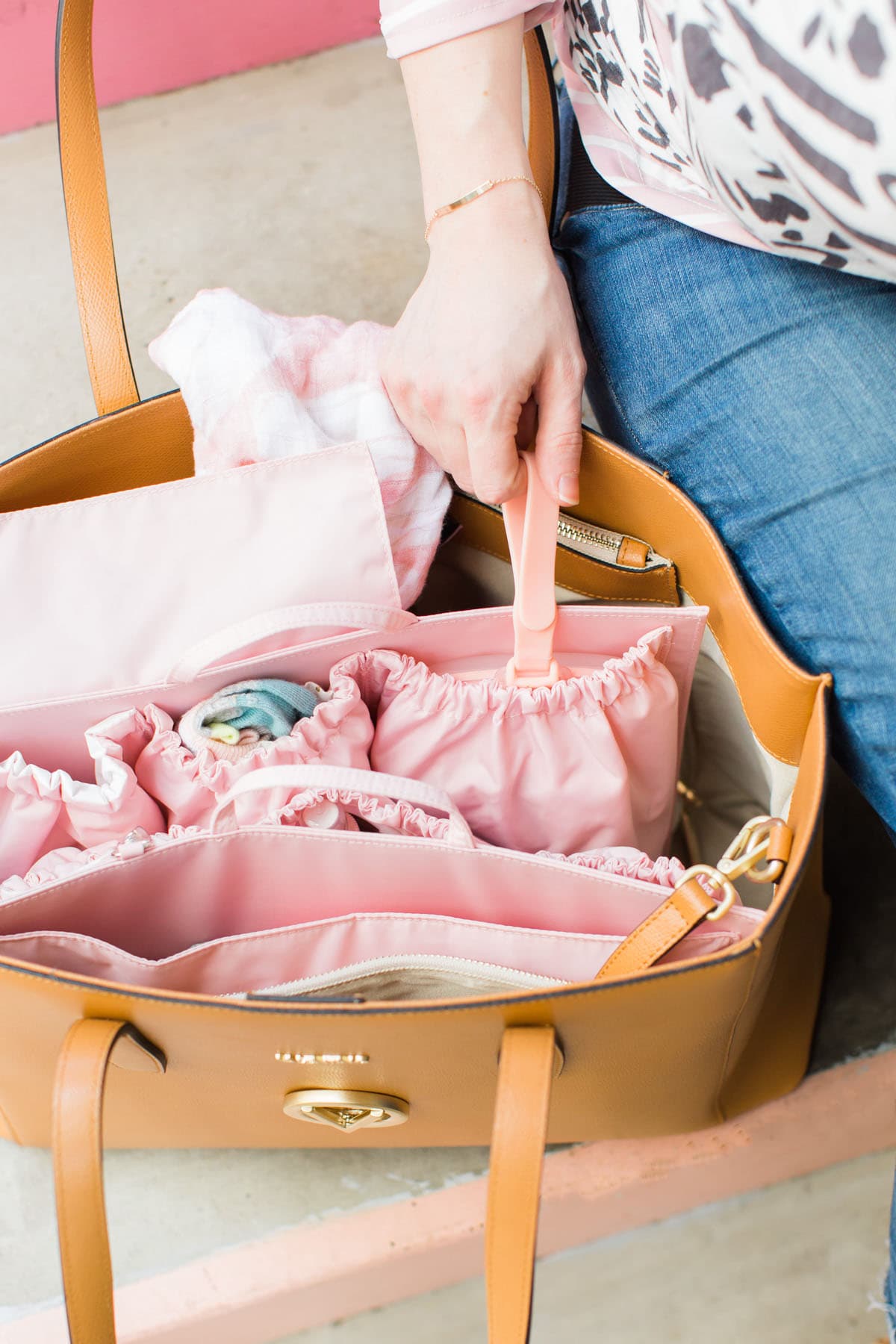 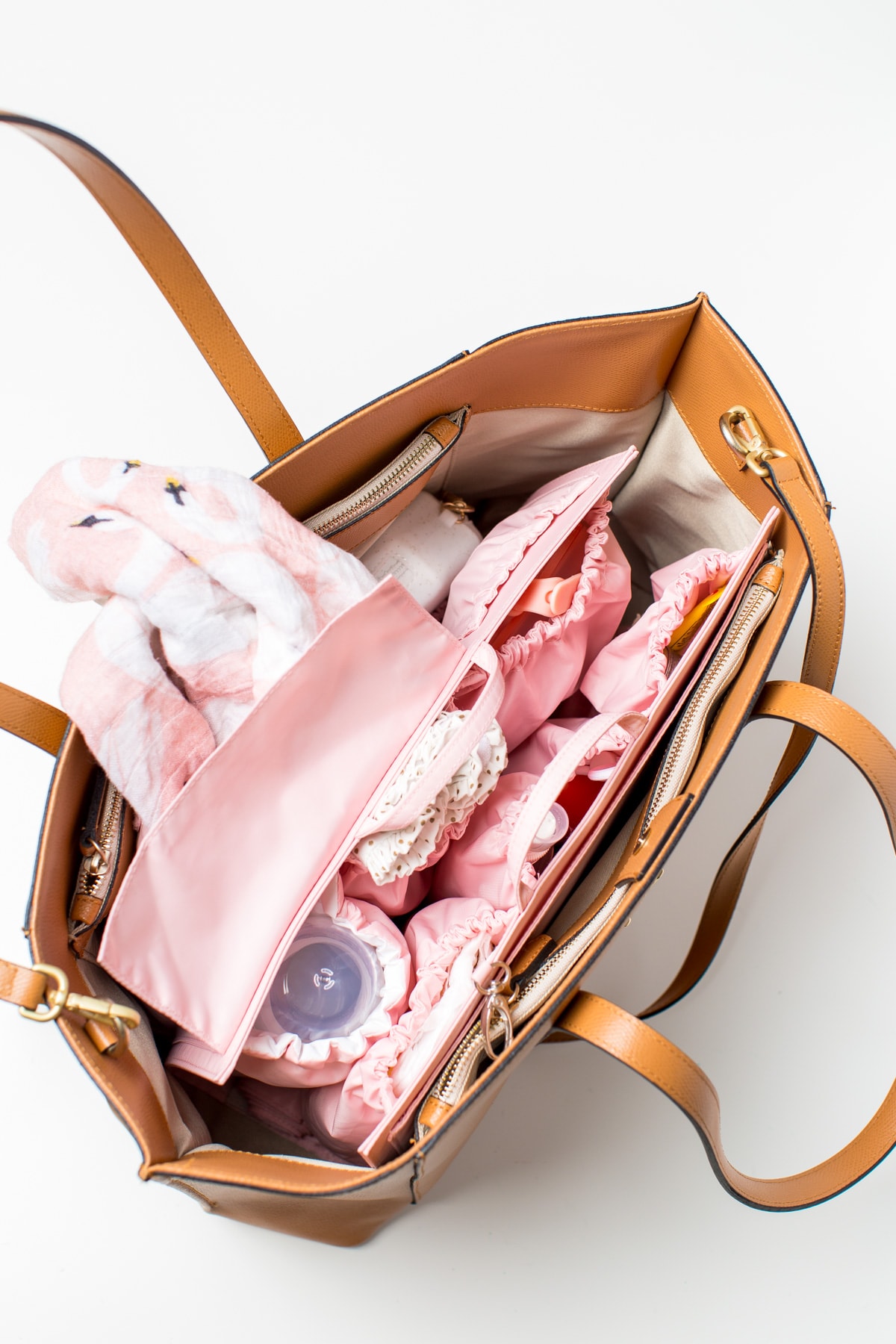 ToteSavvy inserts – the large and mini blush pink inserts are my jam!

Flexible ice pack – for keeping bottles cool and take up a lot less space than a full ice pack. Plus they fit in the Tote Savvy insulated pocket with a single bottle!

On-the-go wipes case – I just refill it with Water Wipes and keep some extras in the same pocket.

An extra paci – she uses her Wubbanub in the car seat but I keep an extra Avent paci on hand in the bag just in case he goes missing.

Diapers – also almost learned the hard way to overestimate on this one. I credit the baby probiotics for that excessive use, haha!

Pacifier cleaner – I actually use this as a baby safe cleaner for all of the things, including my hands! Flu season is no joke right now.

Disposable changing bed liners – even thought the tote insert comes with a changing pad, I don’t like the idea of laying it directly onto the changing station surface and then putting it back in the bag with the rest of our things. So I bought these on Amazon for super cheap to be able to lay down before the changing pad and then toss afterward. It’s almost nice to have in case you need to change them somewhere random that you definitely won’t want leakage on, like the back seat of the car!

Extra clothes – to make this easy, I’ve just been packing a zipper sleeper onesie instead of a full-on second outfit with socks, etc. One and done, my friends!

My wallet –  I tried just taking a few cards with me instead of a full wallet, but then I thought lost one the other day and refuse to go that route again!

Bottle(s) – Gwen is on a breastmilk only diet, but I’ve been relying on pumping and bottle feeding when it comes to productively going anywhere since she’s eating SO often — literally every two hours or less lately. If I didn’t pump, we’d basically never leave the house unless it was to sit in the car somewhere feeding her in the backseat. She’s been having reflux issues so I use the wide neck premie nipples on Dr. Brown’s wide neck bottles to slow the flow and reduce nipple confusion. That said, I made the mistake of thinking the caps for those bottles were secure and milk leaked everywhere, so now I just use a travel cap topper on the filled bottle and take the nipple top with us separately.

The Shusher (aka magic!) – She LOVES the Shusher! So much so that I have one for home and one that stays just in the diaper bag, it works like baby calming magic! It’s only a temporary soother, but hey, it makes diaper changes far less traumatizing on everyone and keeps her at bay a little when I’m putting together the bottle.

Bib & burp cloth – Baby girl eats from a bottle about as gracefully as a gorilla, so we use a bib on her to save her outfit a bit plus an extra burp cloth matches perfectly.

Chapstick stain – this is for helping me look alive during the whole newborn thing.

Lightweight swaddle – this swaddle set is SO soft and ultralightweight so it doesn’t take up much room in my bag. Plus it’s perfect for Houston weather when it goes from warm to cold in a matter of hours.

Gallon Ziploc bags – I keep a few of these folded up with me for soiled clothes, old bottles that haven’t been rinsed, etc. 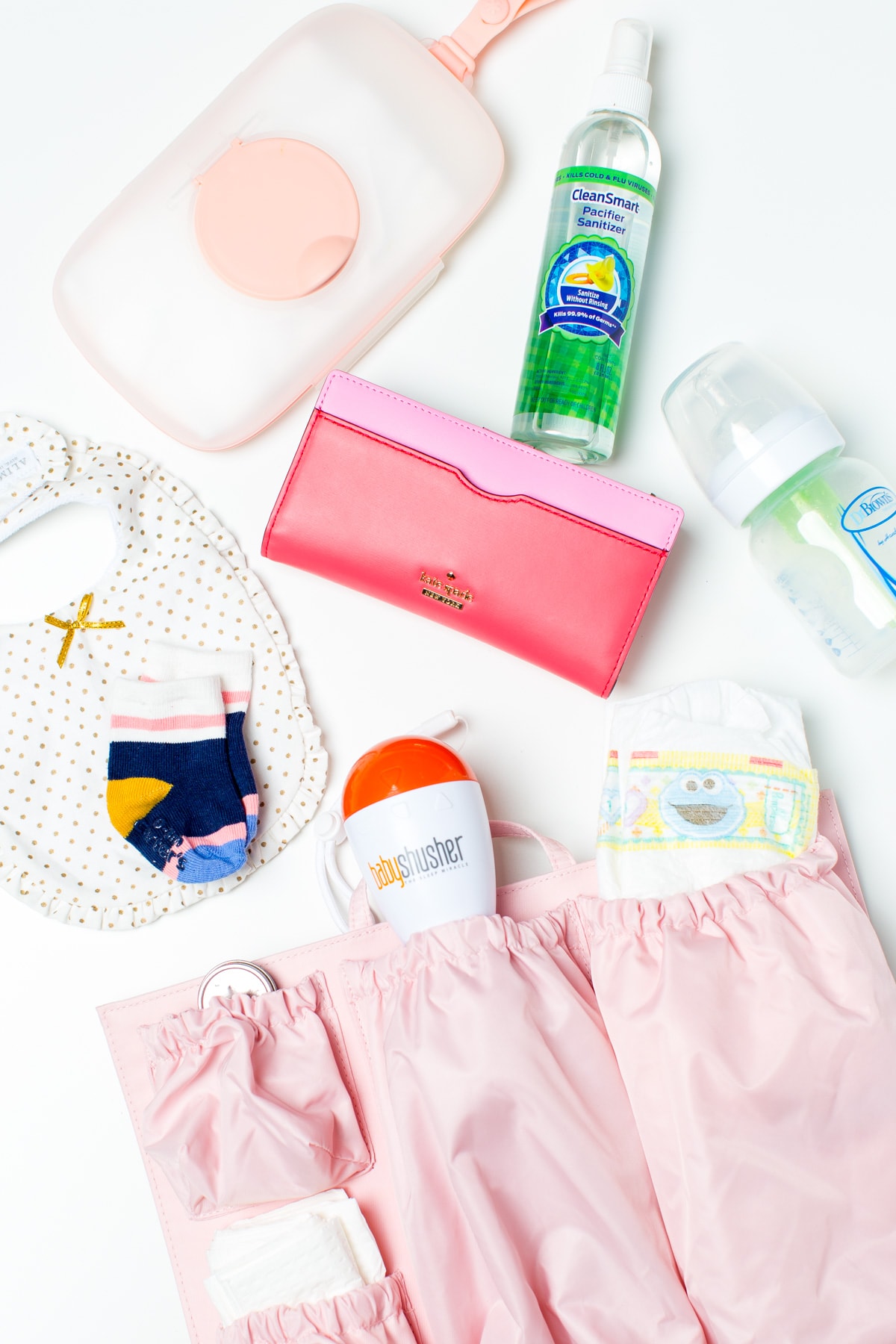 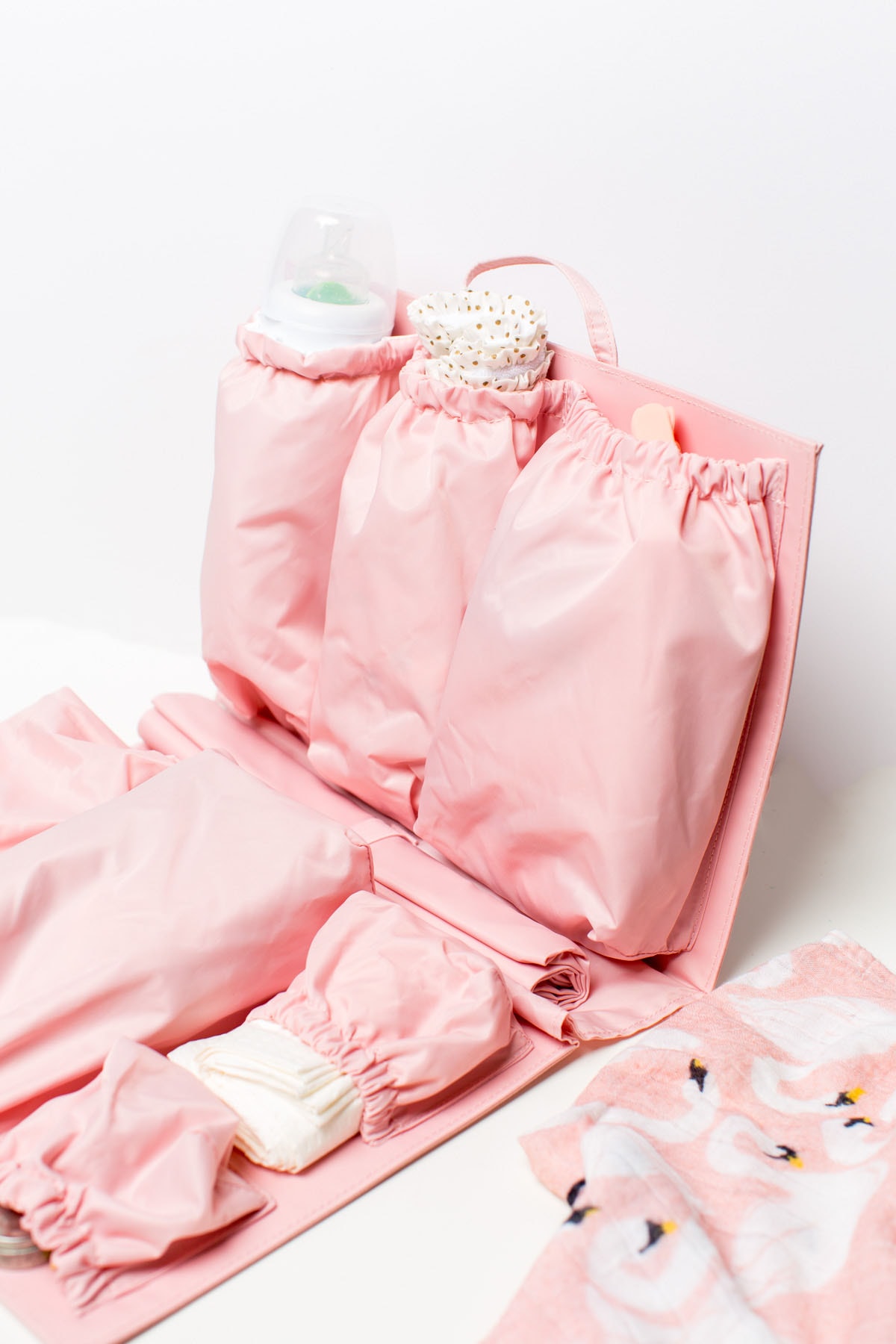 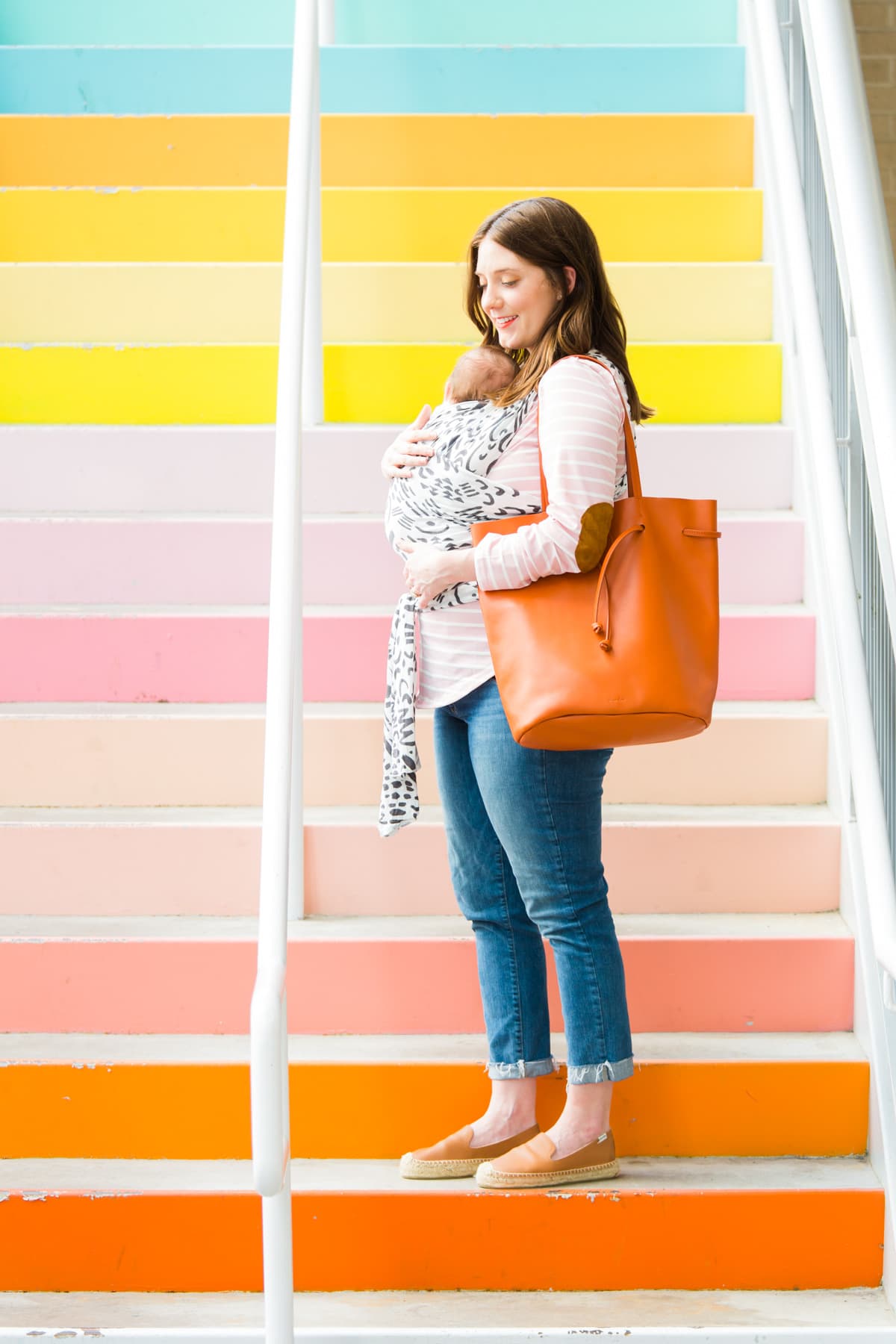 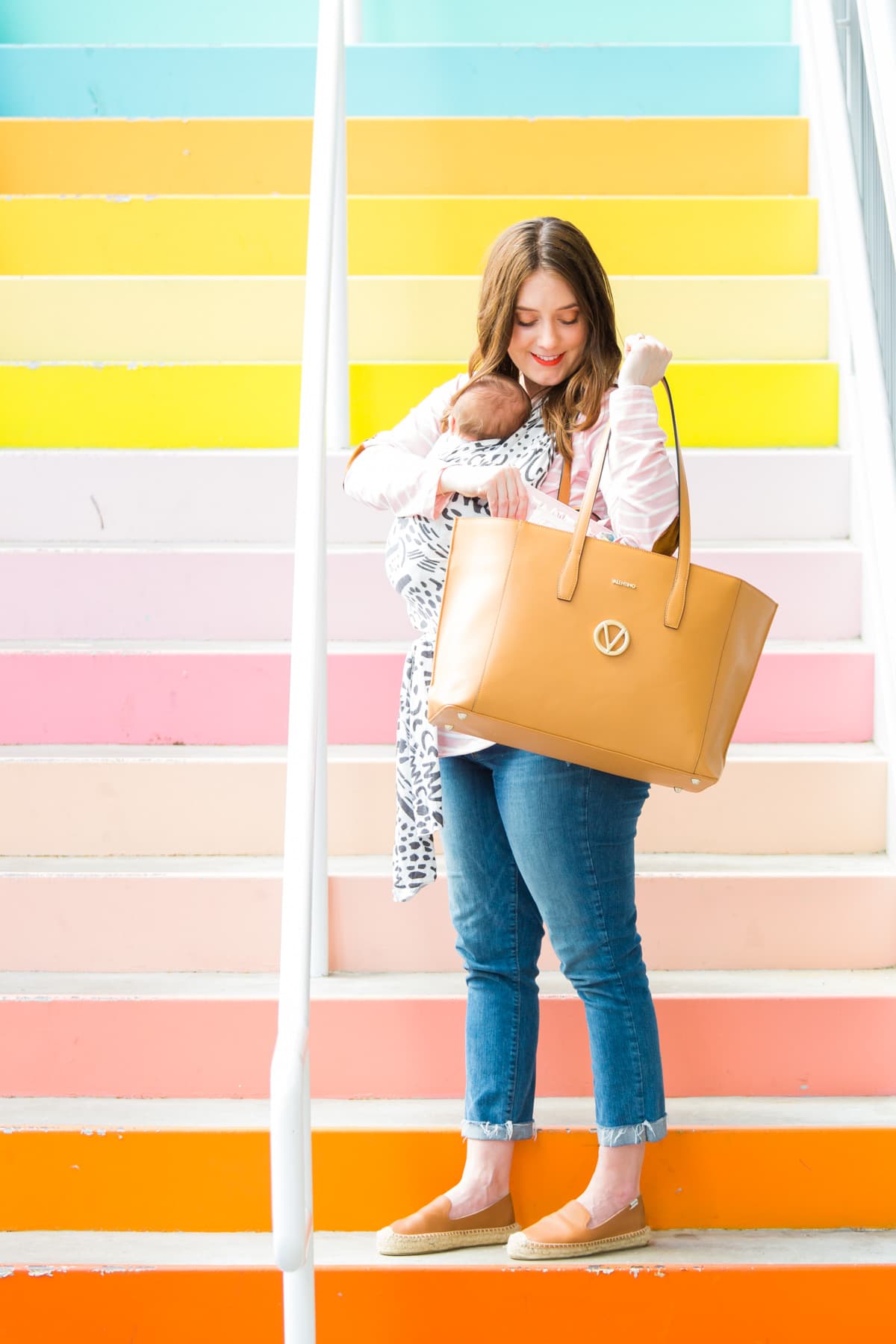 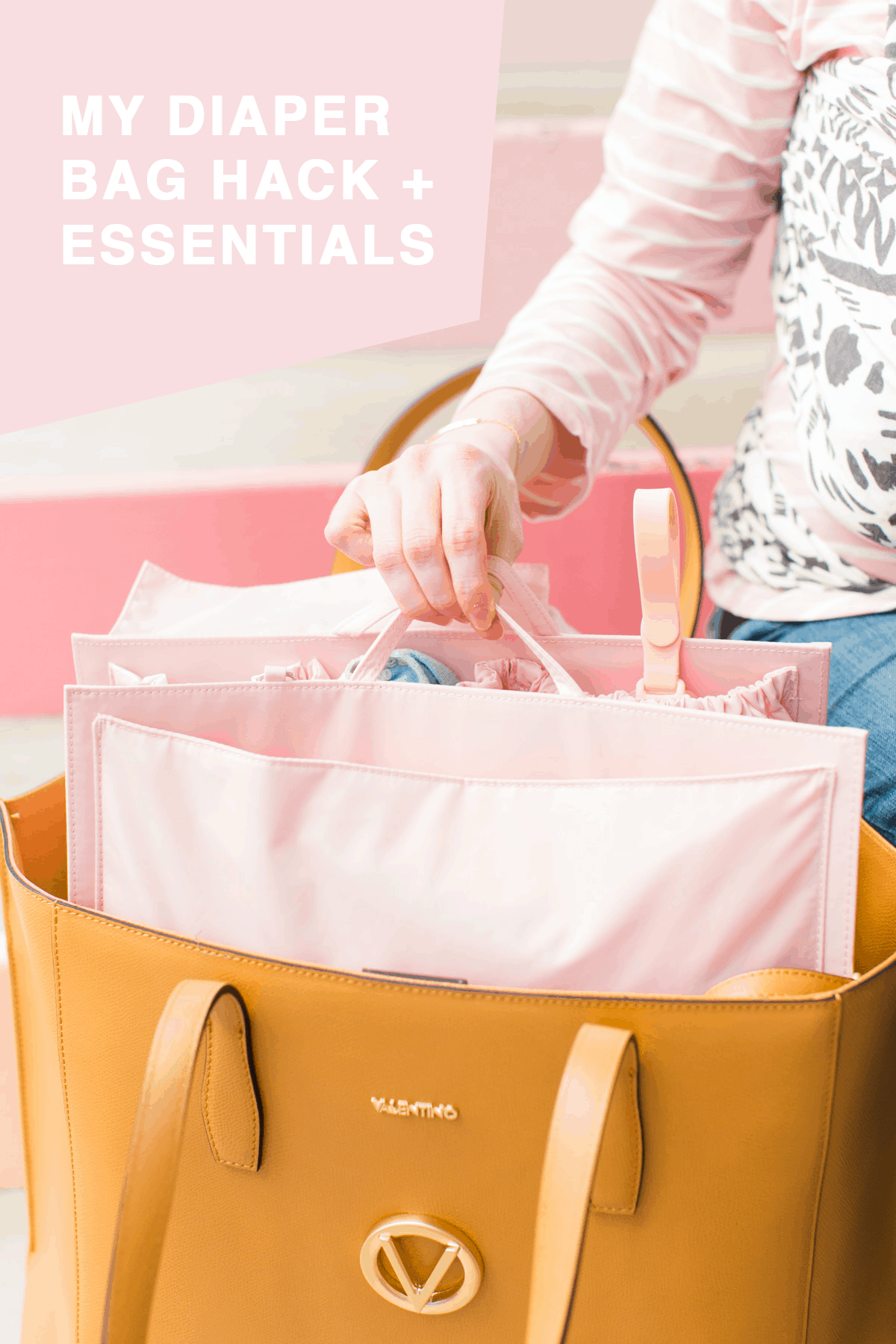 That’s about all I’ve got so far in the diaper bag packing realm, and I’m excited to hear your tips!

A huge thank you to ToteSavvy for sponsoring this post and introducing me to the world of organized diaper bags, ha! Sugar & Cloth has chosen to donate 5% of all sponsored campaigns to charity, which you can read more about right here.