This Lars and The Real Girl couples costume will definitely let you flaunt your inner Barbie stance! See the DIY from our Hipster Halloween series!… 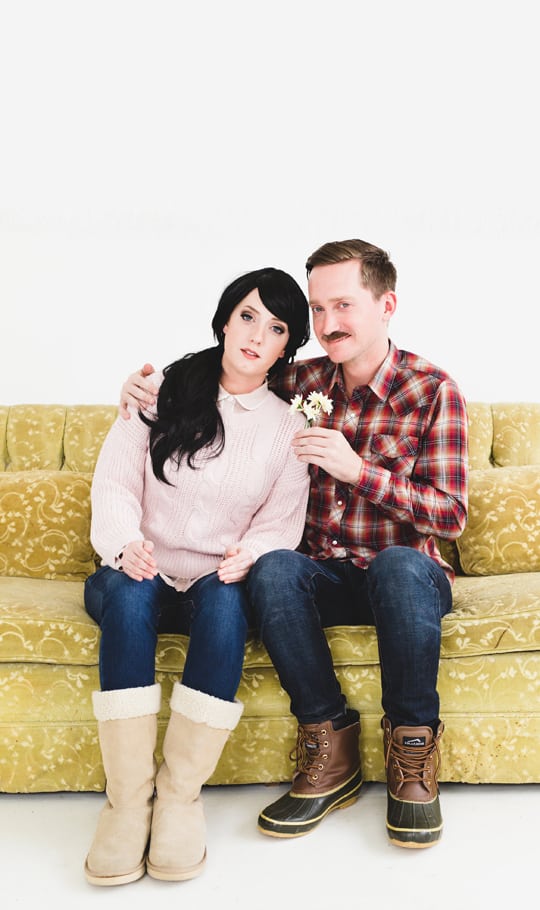 For those of you that love aiming for that mannequin look, this ones for you!.. Except your facial expressions will probably need to be far less cute for photo-ops, and cupped hands make it harder to hold drinks and bites while staying in character.

Nonetheless, this Lars and The Real Girl couples costume is one of my favorites from this series!

Mostly because we secretly couldn’t stop laughing while trying to shoot the details, but also because Jared got to wear his faux mustache again. Not to worry, we trimmed it after yesterday’s costume idea, ha!

The good news about this couple’s costume is you can probably use a lot of items you already have in your closet, minus a few thrifted items here and there, which is what we did because no one needs giant snow boots in Texas.

For those of you not familiar with the film, we’re recreating this look!

You can also try this DIY Pushing Daisies Couples Costume that will add a cool and hipster touch to your outfit.

About: Lars and The Real Girl

Lars Lindstrom (Gosling) is a socially inept loner who lives in a small Wisconsin town.

He works at his family’s small business and spends most of his free time caring for his beloved pet bunny, Gus.

His brother, Gus (Schneider), and sister-in-law, Karin (Mortimer), are concerned about his mental health and try to get him to see a therapist.

Lars is content to live in his own fantasy world until he meets a life-size doll named Bianca (Garner). He believes that she is a real woman and develops a deep, emotional connection with her.

With the help of his brother and sister-in-law, Lars slowly begins to come out of his shell and interact with the outside world again. 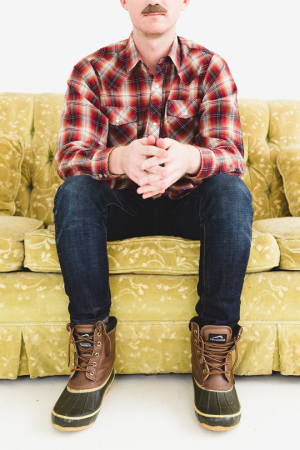 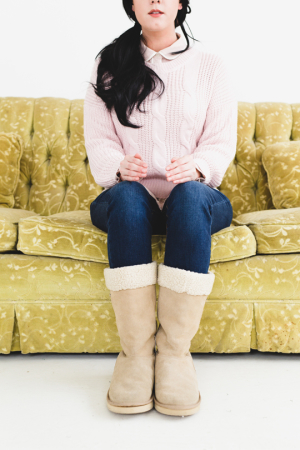 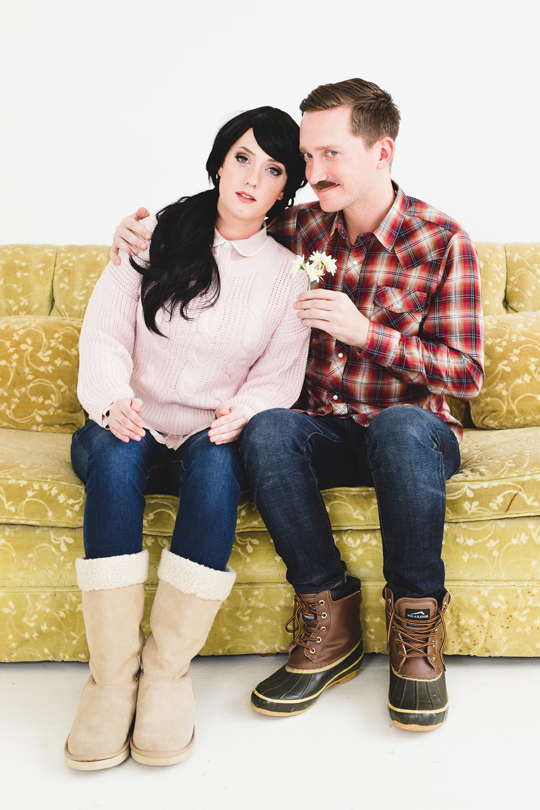 For the Lars Costume

Jared used dark jeans he already owned, and we thrifted a button-up flannel and snow boots. We used faux flowers and a faux mustache for the added touch! 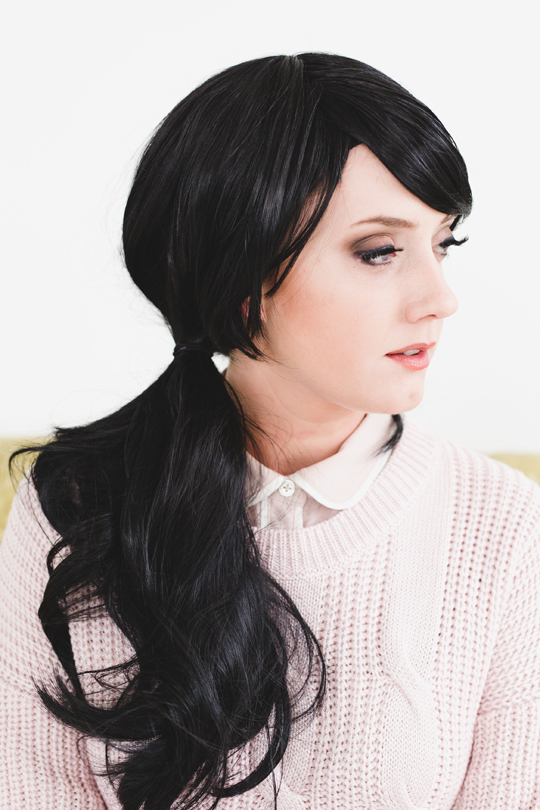 For the Bianca costume (the fake doll girlfriend)

We used this wig, this sweater, jeans and a collared shirt I already owned, and thrifted boots. Of course, it’s not mannequin enough with some over-the-top eyelashes and makeup! 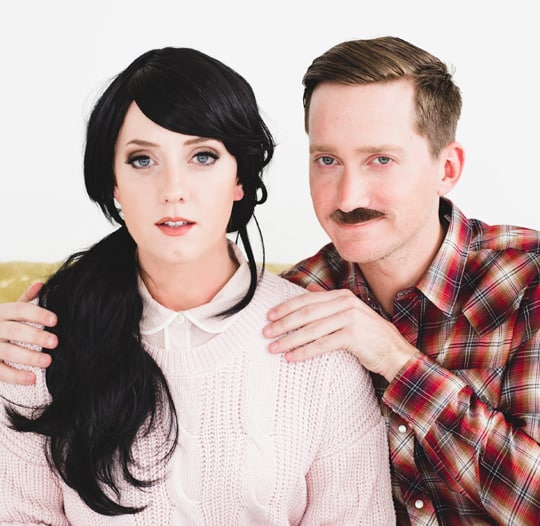 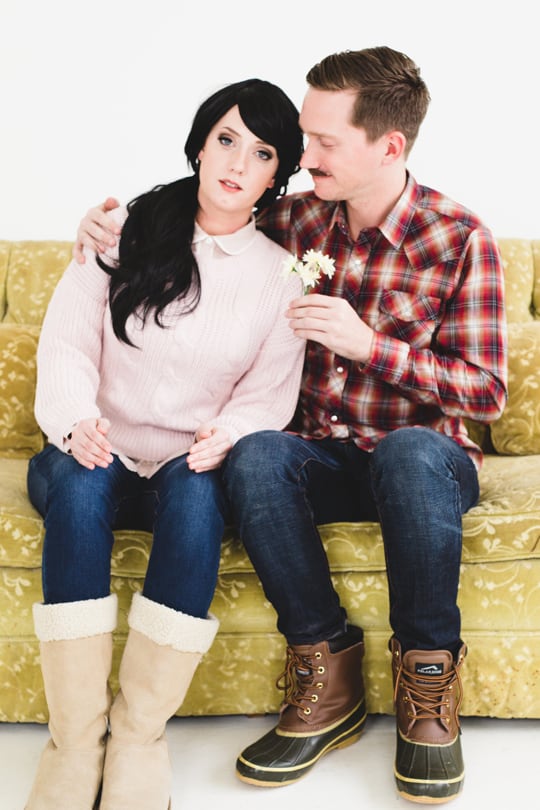 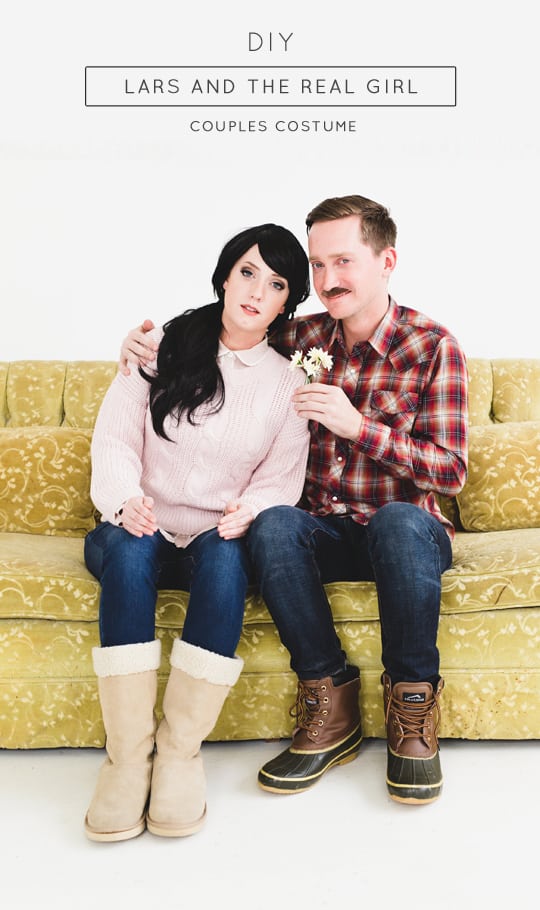 Luckily we were friending up with our studio neighbors, Tout Suite because we were able to borrow their PERFECT green floral couch for this shoot! It also fills the room with dust clouds when you sit on it, so it basically covers every effect. 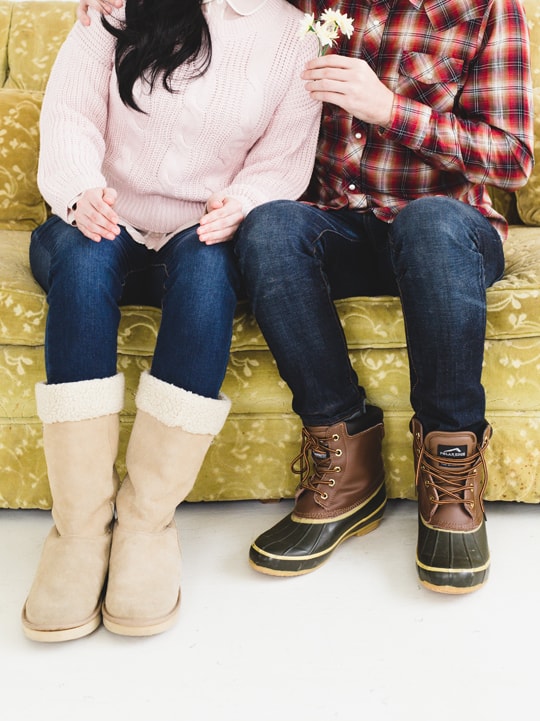 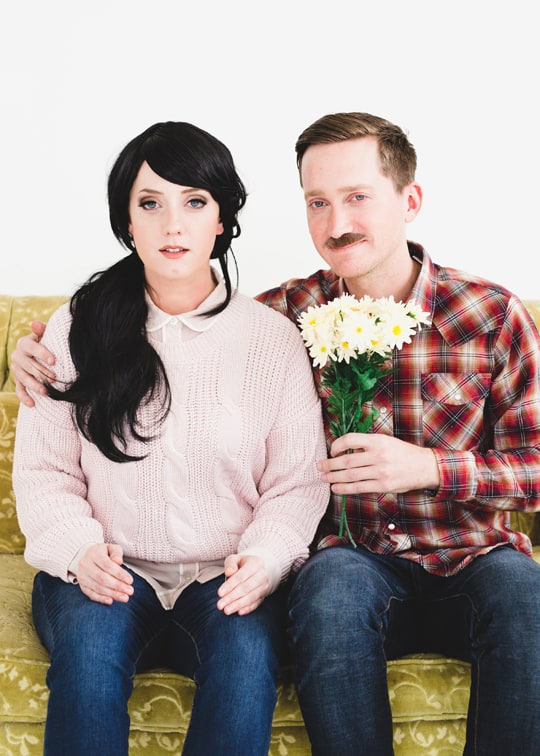 So what do all of you not-so-sexy Halloween costume lovers think of this couple’s costume idea?! Too crazy, or just right?! Be sure to check out the BTS photos below!

photos by Ling Wang, hair and makeup by Bethany Elyse, styling by Sugar & Cloth, assisted by Kayla Haykin, models – yours truly and my partner in crime Jared! 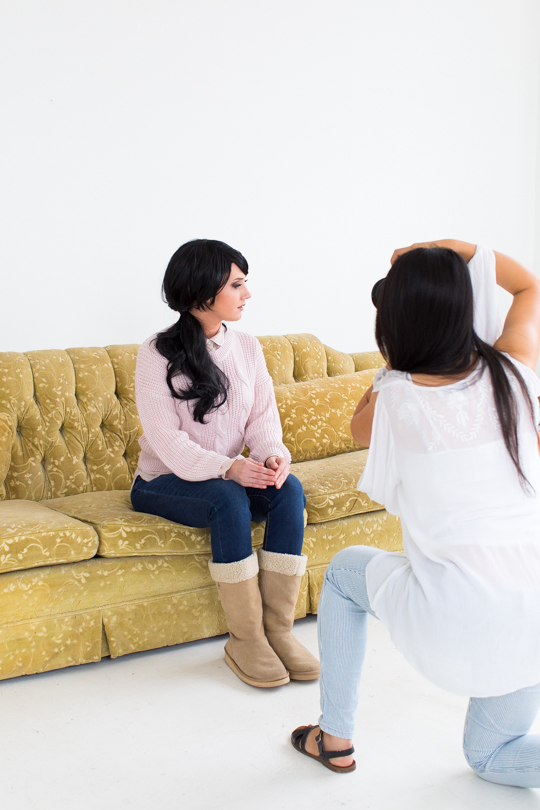 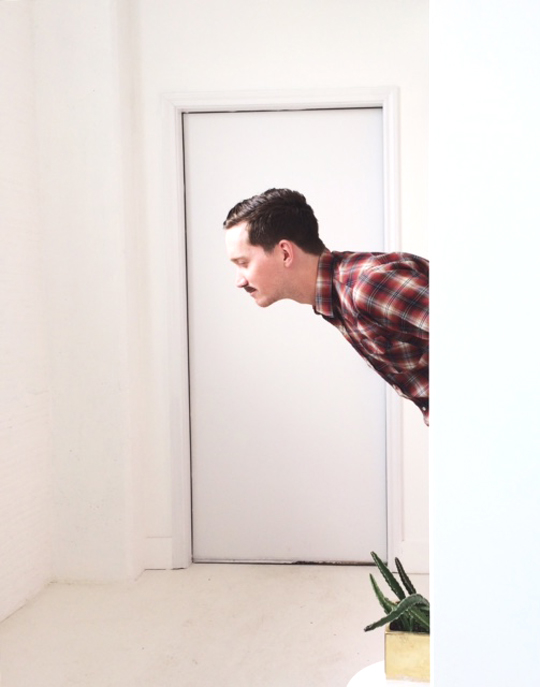 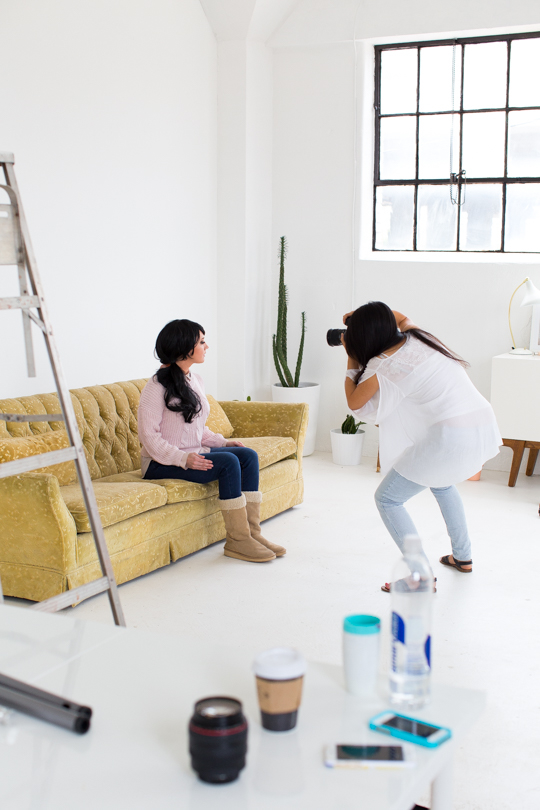 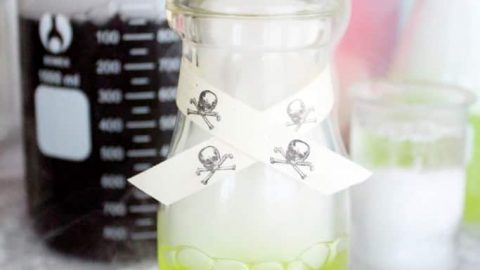 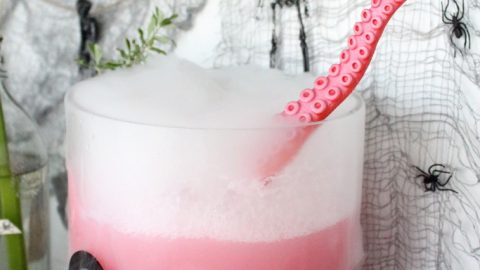 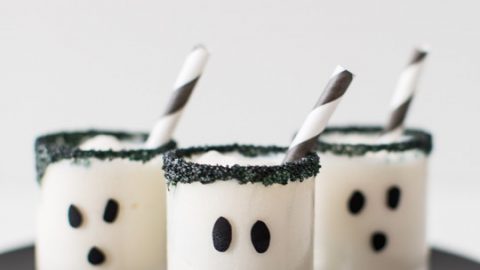 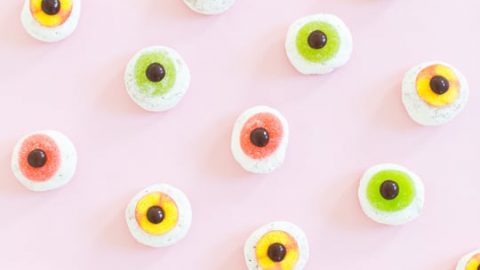 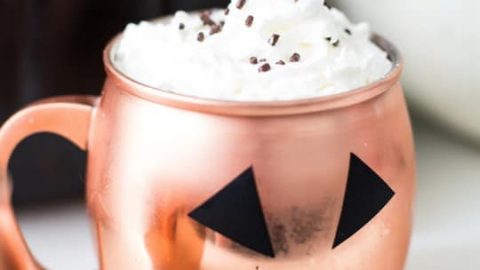 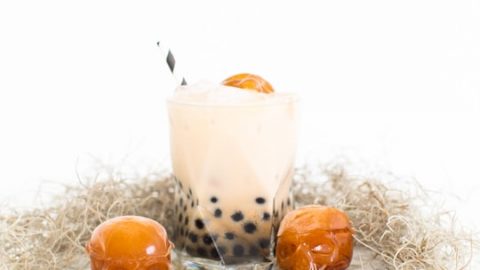